I have known Jeremy Sullivan since I started my freshman year at Nixa High School in Nixa, Missouri. He was both my English and my Speech and Debate teacher. My first thought of Mr. Sullivan was that he was such a character and that he was different than many of my former teachers. He was not only funny, but honest and truthful in everything he said and did. I often got in trouble with him because I'm just a tad bit talkative. So when I suddenly became quiet and reserved, he knew that something was wrong.

I wrote a letter to him about my depression which stemmed from the racial bullying that was happening to me and other students of color at Nixa. His reaction was to show the counselor and he reassured me that no matter what he would be there for me. A week later, the racial bullying had somewhat subsided and my life went back to normal. It was at this point that Mr. Sullivan asked me if I was interested in joining the Gay-Straight Alliance (GSA) club that was being started at Nixa High School. He said it would be a great opportunity for me because I was trusting and making friends was my forte. When I expressed to him my confusion over my sexuality, he didn't judge me and reassured me that it was OK to be confused.

My relationship with Mr. Sullivan has a distinctive pattern: He has always supported me and has always stood up for me. He has made me a better person because he has helped me a lot in finding out who I am. I told him I might be bisexual my freshman year and during my sophomore year, I told him not to tell anyone because I still didn't know. I've had this question since about fourth grade, but I didn't know the labels at the time. I remember one meeting we were talking about how we defined ourselves. When I heard definitions, I got even more confused. Mr. Sullivan told me I didn't need to be put in a spot until I knew who I was. After half a year went by I thought about my life and if it would ever involve a girl. I tried talking to girls, but the thought of me dating one was different. It wasn't until a few months ago, that I realized that I was straight. I felt like I needed to be defined in GSA, but I didn't. Mr. Sullivan helped take that pressure off and helped me to slowly find myself. I hope that this letter serves as a small token of my appreciation.

I met Jackie Swindell when I was a sophomore. She was at Nixa's first GSA meeting. I didn't know her that well then, but after becoming involved as Nixa's GSA president, I got the opportunity to get to know her better. I would see her at the meetings and in the hallways at school. Although she didn't know my name for a while, which is common because my name can be quite difficult and unique, almost everyday when I passed her room she would smile at me and ask me how I was doing. This openness about her helped us become closer.

The following semester, we went to the capitol building in Springfield where we lobbied for the Missouri Safe Schools Act and the Missouri Nondiscrimination Act. I remember our candid conversation about why we were all so passionate about our GSA club. Ms. Swindell talked about how she didn't want people to be bullied just because they're a little different. She also opened up about her special needs son and how whenever he enters a room everyone smiles. She has not only remembered my name since then, but that trip brought us closer together. The following year, we continued laughing together and making so many memories through our common bond: the GSA club.

When we heard that Mr. Sullivan was leaving Nixa, I honestly felt lonely and defeated. I was worried about what was going to happen to the GSA club and our members. But a sense of confidence came to me when I heard that Ms. Swindell would continue as the GSA's sponsor. People may think of our GSA club as a joke and may think that the club will vanish, but I believe differently. This club will carry on. Ms. Swindell and the GSA's new student president and close friend of mine, Parker Davidson, will continue to do great things. Mr. Sullivan and Ms. Swindell need to be noticed and rewarded for what they do not only as teachers, but as humans and friends. I want them to know that they mean so much to so many students and people. They and this club are my family. 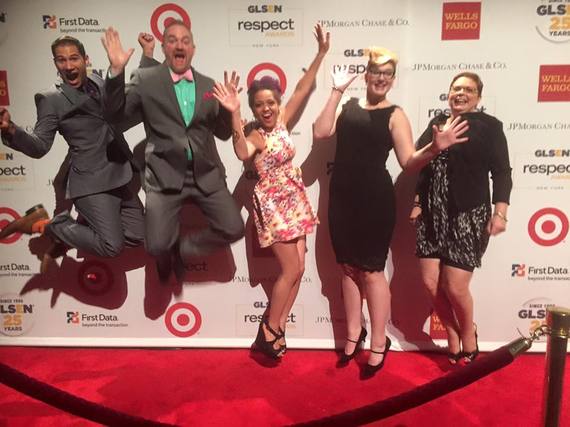