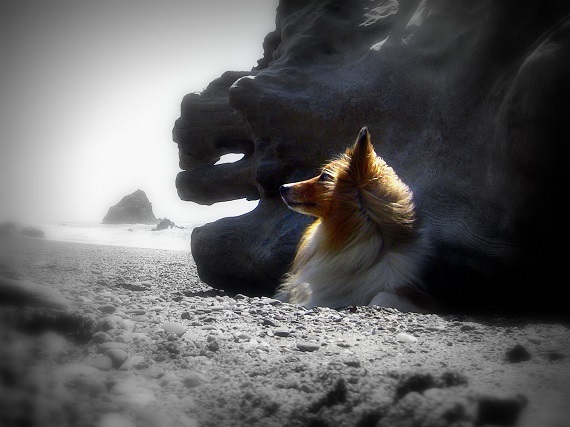 "Friendship is a single soul dwelling in two bodies."
-- Aristotle

Even though I purchased Lucky from a breeder back in South Carolina, I do not feel as if I own him, nor does he own me. We walk the same path while he teaches much about unconditional Love. I am his human... he is not my dog.

I swore to myself I would never have another dog after witnessing the death of the one before him. I felt as if I could not take going through the experience of losing a dog ever again. The one before him, another Shetland Sheepdog named Bette, was a very special little female who had massive health problems. My wife at the time and I were advised by a Veterinarian to "put her to sleep" (an accepted phrase I do not understand). So, we did. Her final breath seemed sudden while she was in my arms. In one moment, she was breathing. In the next, she was motionless... gone. Even to this day while writing this piece, the memory brings forth intense mental pain.

Yet, this is how we all heal pain: by letting it out.

The year was 2006. As I was sleeping the night I was responsible for the death of Bette, she came to me in a dream which I still vividly remember. Within the dream, Bette was enraged with teeth showing as if she wanted to chew me to pieces. I awoke in a cold sweat and feeling like the scum of the earth about what I had done to her. The following days, weeks and months were horrible.

A few months later with the light of the day long gone, a desire kept creeping up within me to look at puppies online. Fighting a battle of the mind, I felt as if I was being pushed to seek by an unknown force. Leaving the computer several times, I searched for something else to take my mind off of dogs. Yet, I found myself returning. My inner voice was screaming at me to continue.

Perhaps you have had the same conversations with yourself as you agonize over what to do...

"Oh, it won't hurt anything simply to look at pictures."

I suppose those little phrases could apply to any choice we are thinking of, yet with respect to my choice at hand, the last one became significant. I searched again for Sheltie puppies, ending up at a breeders site with six-week-old puppies. One of them looked exactly like Bette. I was done.

As tears rolled down my cheeks, I walked outside into the cold December night air. I stood silent while looking up at the stars. Silence for a long flowing moment on a windless night. Life all around me was motionless as I stood still. Out of nothing, I heard clearly a single bark in the distance.

If you are like me, taking signs in life as we travel the paths of us, I knew precisely what the bark meant in relation to a choice being considered.

The next day, I called the breeder who was a five-hour drive away and set up a visit. In my mind, I was just going to look. Yes, the drive felt like it took forever. Once in the company of all of the puppies, the one different from all of the others, was the one who came over to me as if we had known each other forever. Two weeks later, I drove back and picked up the eight-week-old puppy... Lucky.

If you have gone through something similar and are thinking about a new animal in your life, perhaps go for it. Lucky is one of the best things that has ever happened to me. In a sense, he saved my life. Maybe you are on the fence because your inner voice is speaking to you while a little one calls your name to come find a new friend.

The hardest aspects of our lives are when we beat ourselves up over something. We choose to do these things. Why? Because we choose not to listen to our hearts, inner voice, soul or whatever you wish to call that which is Love. Our animal friends... dogs in my case... are the definition of unconditional love. Once I looked into his eyes the very first time, the choice became an easy one. Choosing love became the path away from sadness... and I will make the same choice every time.