Competing at the Olympics as an athlete has always been a dream of mine ever since I picked up my first snowboard when I was 10 years old. Now that I am going, I find that I am proud to have the opportunity to compete as an athlete but also feel an added responsibility as an Ambassador for Equality.

As a gay athlete going to Sochi, I am infuriated by the homophobia, established by the Putin government. As I trained for the 2014 Olympics, it was never my plan to come out to the world in response to the gay propaganda laws in Russia. But when I heard about the law banning "propaganda of non-traditional sexual relations" in Russia, I had to. I had to speak out because discrimination against the LGBT community in Russia or anywhere in the world is wrong.

And with the 2014 Olympic Games set to take place in Sochi, Russia, it is important to send a clear message that discrimination and homophobia are against the Olympic ideals and principles, and are an insult to basic respect for our common humanity.

LGBT equality is about human rights -- rights that are being denied to millions of people in Russia and throughout the world. Laws like the one passed in Russia criminalizing homosexuality and discrimination.

I've heard many inhumane stories and I've been sickened by the videos I've seen of the violence towards homosexuals in Russia. The Russian gay propaganda laws have led to an increase of violence against LGBT Russians.

74 percent of the Russian population does not believe homosexuality should be accepted in society. That means if you are gay, living in Russia and you walk out of your house, 105.8 million out of the 143 million people do not like you and do not want you there. And yet there are Russian activists and community leaders who have demonstrated astonishing courage by speaking out. I applaud them and hope others with stand up and join them. Young people everywhere deserve support throughout their journey of self-discovery. It is wrong that the Putin government has criminalizes any form of support for young gay Russians. They need the support.

I believe in the spirit of the Olympic Games, and while I am infuriated by the already obvious consequences of Russia's anti-gay laws, I never considered boycotting as a solution. The Games are a celebration of sports and competition, it is a time when the world stops and unites together, regardless of differences in politics or faith.

Yes the focus should be and always will be on the sport, Teams and athletes should be thinking about the importance of highlighting the challenge between the increasingly dangerous environment for the Russian LGBT community and the principles of the Olympics.

The honor to compete as an Olympic athlete is something I have been working toward for more than a decade. In a few weeks, my dream, as an athlete and as that kid 11 years ago will be a reality. While the passionate activist within me will be silenced during the games so I don't risk the opportunity to compete. However after my competition, I am willing to use the Olympic platform to further speak out with determination and pride in harmony with the Russian and international LGBT community. 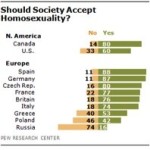