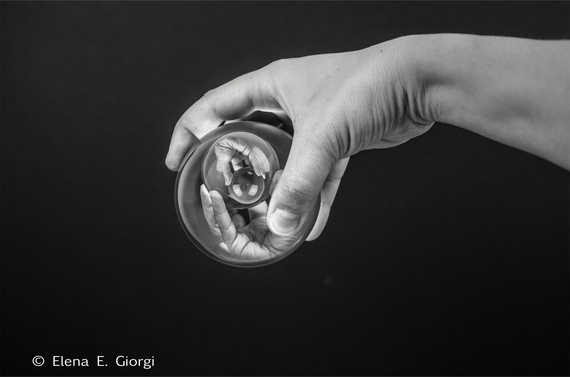 For years the concept of a "genetic chimera" -- an individual with two genetically distinct cells lines in his/her body -- has sparked the imagination of writers: from Stephen King to Michael Crichton, from CSI to The Office. The idea that an individual could harbor his/her own twin is creepy and intriguing at the same time.

Recent advances in DNA sequencing technology have allowed us to probe much deeper into a person's genome, to the point that today scientists believe that chimerism could be far more common than what we originally thought. Chances are, you could be your own twin. But how surprised would you be if I told you that you are actually far more likely to be your mother's chimera than your unborn sibling's?

Before the 1960s, it was believed that the placenta was a perfect barrier between mother and fetus, and no blood or cells could trespass it in either direction. Today we know that there's actually a two-way exchange of cells between mother and fetus during pregnancy. What's even more surprising is that these "extraneous" cells outlast the duration of the pregnancy and can in fact be found in the child and/or the mother years after birth. Male DNA has been found in women years after they had given birth to their sons. In fact, fetal cells are released in high quantities during spontaneous abortions, hence can be found even in women who have never delivered, so long as at some point in their lives they became pregnant.

Conversely, maternal cells have been found in the liver, lung, heart, thymus, spleen, adrenal, kidney, pancreas, brain, and gonads of healthy adults. Microchimerism (i.e. the presence of small concentrations of genetically distinct cells) could also originate from siblings' cells, transferred from the mother during successive pregnancies. Regardless of the direction of transfer, the extraneous cells migrate to a certain tissue, where they differentiate and proliferate, acting as if they were engrafted.

This of course prompts the following question: is microchimerism beneficial to the mother's and/or child's health?

A number of studies have found significantly higher levels of fetal microchimerisms in mothers affected by systemic sclerosis, an autoimmune disorder characterized by the hardening and scarring of the skin. Similarly, both animal and human studies have found higher concentrations of microchimerism in females with some form of thyroiditis, an autoimmune disorder in which the immune system sees the thyroid and its hormones as threats and starts producing antibodies against the gland. This, however, doesn't tell us whether the microchimerism caused the disease or, instead, the chimeric cells were recruited to the tissue afterwards.

Microchimerism has also been reported in several cancer studies, but again, whether these cells have a protective effect or a detrimental one is unclear. Some of the findings, when looking for example at breast cancer patients, have led to speculation that fetal cells could be recruited from the blood to the tumor site in an attempt to repair the tissue. The opposite trend has surfaced in colon cancer, where, rather than having a salutary effect, fetal cells could possibly contribute to cancer pathology by triggering inflammatory responses that lead to tissue damage, similar to what occurs during transplant rejection. However, it's also possible that the chimeric cells may be completely neutral to the host, and their presence or absence in damaged tissues could be due to side effects of the disease.

The reverse form of mother-fetus chimerism--the presence of maternal chimeric cells in her children's tissues--has also been studied extensively in both infants and adults. This type of microchimerism has been associated with diseases such as diabetes and biliary atresia, a congenital defect where the bile duct between the liver and the small intestine is blocked or absent. But again, results gathered thus far seem to be inconclusive as to whether the presence of the maternal DNA is a cause, result, or byproduct of the disease.

"It is such a new area of work and there is so little knowledge," fetal microchimerism specialist J. Lee Nelson of the University of Washington told me in an e-mail. "Overall we expect microchimerism to have the potential for both beneficial and/or detrimental effects, whether it is of fetal origin or maternal, or other sources of microchimerism."

We consider ourselves to be single individuals, but when you stop and think about it, who are we, really? Each one of us is made of trillions of cells, and some of those cells could very well belong to our unborn sibling, our mother, or our child. Add the fact that we harbor millions of organisms and bacteria that can indeed impact our phenotype depending on what genes they express, and you get the picture of an organism made of many entities rather than a single individual. A new school of thought in biology claims that we are not individuals, but rather symbionts--distinct organisms living with one another.

In this light, chimeras are no longer a genetic paradox, rather, just another path in an incredibly variegated evolutionary landscape.

Originally appeared in The Scientist as part of the article on chimerism titled, "From Many, One." April 1, 2015.