"Boys will be boys, and girls will be sluts.”

Tanenbaum has spent the past two decades researching the word "slut" and how the label is used to shame and police young women, and female sexuality as a whole. Her first book on the subject, Slut! Growing Up Female With a Bad Reputation was published in August 2000. Nearly 15 years later, she re-examines what has changed -- and what hasn't -- in I Am Not a Slut: Slut-Shaming in the Age of the Internet, published this week.

I Am Not a Slut focuses on how digital culture has shaped the ubiquitous nature of the "slut" label. "Today we’re constantly on display," said Tanenbaum in an interview with HuffPost Women, "and certainly men feel that pressure too, but the pressure on girls and women is really inescapable, because so much of our feminine identity is connected with looking sexy and looking sexy all the time."

We spoke with Tanenbaum about the history of the word "slut," what it means for girls and women today, and how we can employ concrete measures to stop slut-bashing.

Why do you think the word "slut" holds so much power?
The word "slut" and synonyms like "ho" are remarkably confusing insults. I think a lot of their power comes from the fact that they’re fluid and often ambiguous. For most people, "slut" means a woman who is disgusting, shameful and out of control sexually. And it stems from the sexual double standard. Men are expected, even encouraged, to be sexually active -- even in an uncontrolled manner -- while women are expected to be minimally sexual.

What is the history of the word “slut?” How far back does its current meaning go?
The very first usage of the term that we know of is from 1386 from Chaucer’s “Canterbury Tales.” It appears as a noun, “sluttish,” and it refers to a man who is dressed in dirty and untidy clothes. Over time, "sluttish" became a noun, “slut,” and eventually it was used exclusively to refer to women -- always a slovenly white woman from the poor or working class. From the very beginning, you can see the intersection of race, class and gender in the word "slut." Over the centuries, it came to refer to a white woman who is low-class and who also is inappropriately sexually forward. Untidiness over one’s home or attire morphed into a sloppiness over one’s sexuality.

It used to be that, in my observation, every school had one or two girls that were the “school sluts,” and everyone knew who they were and they would be treated horribly. But now, pretty much everybody gets labelled a "slut" at one point or another. I have not met anybody under the age of 25 who has not been called a "slut" or a "ho" at some point in her life. It is ubiquitous. 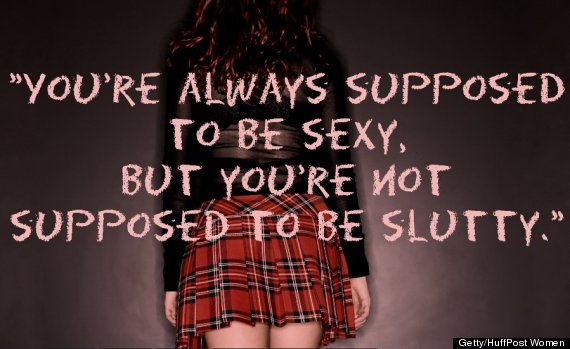 What is the difference between "slut-shaming" and "slut-bashing"?
"Slut-bashing" is a word I coined in the 1990s to describe a very specific phenomenon: repeated acts of harassment, usually verbal, conducted by peers in junior high and high school who are basically ganging up on a fellow classmate and labeling her as a "slut." It was a type of repeated harassment with malicious intent in this closed environment -- the school. And that still absolutely exists.

But it’s interesting what has been added to slut-bashing. [Today], a lot of [the “slut” name-calling] is more casual, more diffused. It may not even have hostile intent. Sometimes it’s positive or neutral, like somebody’s calling you a "slut" because you look good. You’re left confused -- “Am I being shamed or am I not being shamed?” I did not coin the term "slut-shaming," but I think whoever did was very smart. It’s a good catch-all term.

In your opinion, is it possible to reclaim the word "slut"?
My central argument is that it doesn’t matter what the intent of the name-caller is, because the result is always negative. It always leads to policing and judgment and shame, even when the initial intent is lighthearted or neutral.

There certainly have been good-faith efforts to rehabilitate the word. Kathleen Hanna in the band Bikini Kill, famously scrolled the words “slut” in lipstick on her stomach, and would lift her shirt during concerts. That was a snarky retort to guys in the audience who were thinking she was a slut. There’s a literary blog called BookSlut, which is using the word in a cheeky way to imply that reading promiscuously is a good thing. And then of course we’ve got the SlutWalk movement, which reclaimed the word "slut" to raise awareness that wearing revealing clothing or behaving in a sexualized manner is never invitation for sexual assault. I absolutely recognize that for many individual women, embracing the label "slut" or ho can be empowering for them. And I’m not trying to minimize their personal experience.

I’m more interested in the large-scale feminist strategy. I want to pause and [think about] whether this strategy on a mass scale is a good one. Will it actually reduce slut-bashing and slut-shaming? After speaking with girls and women who have attempted, on an individual level, to reclaim the word "slut," I conclude that, right now, this is not a safe or effective strategy. My concern is that until we get closer to sexual and racial equality, calling ourselves "sluts" and "hoes" could open up new opportunities for harassment and assault for all women.

So what can we do to combat slut-shaming and slut-bashing?
I think it’s up to us to lead by example and be role models. [We need] to talk about the power of slut-shaming and why it is harmful and damaging -- not just for the girls who are labelled, but for all women and girls.

There’s a new movement called the Stop Slut movement, and it’s centered around an excellent play called “Slut: The Play.” But what’s even more exciting is that around the play adult mentors are paired with high school girls who then learn to develop tools themselves to go into their high schools and talk about these issues and to form clubs with their peers.

How does our slut-shaming culture contribute to a culture of violence against women?
One theme that I’ve found over and over again, is agency. Even if the girl who’s labelled a "slut" or a "ho" isn’t sexually active, or not more sexually active than her peers, she is perceived to have done something active that provoked the reputation. There was a landmark study done at Duke University, called the Women’s Initiative Study. There was one student who said that femininity is all about “effortless perfection.” The slut is somebody who never understood that or understands it and is disregarding it. She’s being sexy in a way that is considered overt or too attention-seeking.

The element of agency gives ammunition to people who want to judge, shame and police the slut or the ho. Because they say, “Well, that girl deserves to be called a slut, because she chose to do something wrong.” It’s that mentality that always dovetails with the mainstream response to sexual assault. When woman comes forward and says, “I was sexually assaulted,” the default mainstream response is to accuse her of exerting agency to provoke that. 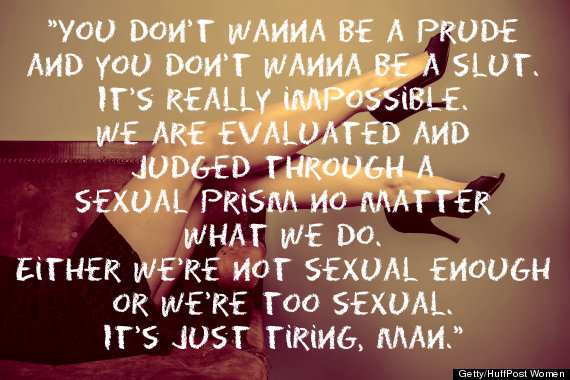 It’s god damn exhausting!
There’s really no way to win. And I’m so glad that you raised that issue, because so many adults are judgmental about the way young women present themselves in public. They just don’t understand how these young women have to walk on this razor-thin tightrope to not be a prude, not be a slut, be sexy but just the right amount, not show that they’re exerting any effort -- you just woke up looking sexy in this very understated way.

It’s impossible for anybody of any age. That’s why we’re in this muddle. Because just existing while female puts us at risk of being evaluated on a sexual scale.