The scene is a familiar one:

I am out on a dinner date with a non-Vietnamese friend and we are at a Vietnamese restaurant, either in Dorchester or Chinatown.

The server comes to take our orders. The waiter asks my friend first. I watch, with a smug smile, as my dinner guest stumbles over the name of his order, asking for a bowl of "foe" and making several other linguistic faux pas. My grin only widens. At this point, I am ecstatic.

When it is my turn to order, I, with deft skill and precision, immediately announce my selection with complete confidence, authoritative assertion, and a near-flawless accent (while appearing nonchalant and totally casual, of course): phở tái (foʊ taːj˦ˀ˥), pronouncing the hidden, subtle "h" in tái, eliding beautifully and musically between the two words like some sort of Vietnamese language genius. I hand over my menu and bask in the awe of my dinner guest. He knows I am in my element. I solidify my dominance within my realm.

Until, that is, our waiters asks us what we want to drink. My whole carefully-rehearsed charade completely falls apart when I blank out on the Vietnamese words for "ice" and "water." A long silence ensues as our server waits. I stutter and fall over my words, growing increasingly red. I either close my eyes or black out at one point. And then, I ultimately concede to using English. It is then made completely and totally clear to my dinner guest one thing:

I am not bilingual. 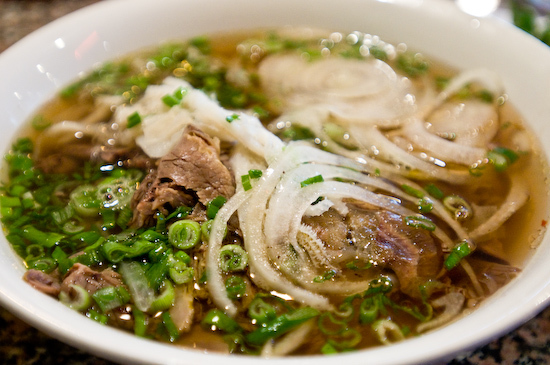 I lost my parents' mother tongue long ago, being a champion of the American assimilation game as a child. While I can understand Vietnamese pretty well, my speaking skills would be on par with a third grader's. It would not be an exaggeration to say that it is my biggest failure in life, and life, in turn, has never failed to remind me of that fact.

I have always been jealous of my Asian friends who are both fluent in their mother tongue and in English. In the middle of a crowded public place, like donning a spacesuit or plunging underwater, they can instantly be surrounded by a thick, noiseless atmosphere, accessible to only them, a space where none can penetrate. Or when meeting a stranger who speaks the same language, they can automatically connect in this one way, even if everything about them may be worlds apart.

Their family gatherings are probably a lot less awkward too. They've probably never had to bear the disappointed head shakes, the resigned acceptances of "it's okay, he/she doesn't speak our language," or the not-so-subtle jokes at their expense. They've probably never had to experience what it feels like to be removed from your own family in always that one, critical way, removed from the people you are supposed to feel the most connected with. There's a reason why we call it a language "barrier," as if it were a thing physical.

To lose a language is to lose so much of one's access to a culture. While what often separates minority groups from the majority is a range of things -- like culture, tradition, shared experiences, shared history, values, food, and to some extent, appearance -- the most important aspect is arguably the ability to communicate these things and to pass them on. Language is what connects everything.

But since I can't speak Vietnamese, if I were to dye my hair blond, change my eye color to blue, and bleach my skin -- would anyone consider me Asian then?

Yes. I know that being Asian is more than being able to speak a language and more than outward appearance. While I've never been proud of it, I know my loss of language is just another narrative in the Great Asian-American Story, and that it's not a narrative exclusive to just me. It's simply another way to define who I am -- by ironically defining myself but what I am not. And that is my cultural identity, something that cannot be taken away from me even if my language was. To me, being an Asian in America has always meant being stuck in this weird, liminal space between two cultures, always in the process of moving and redefining and restructuring and reconciling. In other words, we are still shaping our stories. And at least I can talk about it.