Let the record show, I hereby renounce my constitutional right to bear arms as outlined in Amendment Two of the Constitution of the United States.

It's a strange thing being a Christian in America. The mere fact that I have waited until now to say this out loud (or at least put it in print) reflects the fractured state of modern life. As an Evangelical Christian born in Texas and raised in Colorado, I am fully aware that there are numerous people within my own faith community who will strongly disagree with what I am about to say (although I hope they will be charitable in their disagreement).

Indeed, even among members of my immediate family, I am in the minority in this regard. Actually, when it comes to guns, I may be the lone black sheep. I am, after all, the grandson of a Texas lawman/rancher/cowboy, which means that firearms quite literally constitute my inheritance. Guns are part of my family's legacy, the only tangible reminders I have of my grandfather. And their presence haunts me.

So before you decide to write me off as "un-American" or label me with some other freedom-hating pejorative, please know that my concern here is not with the politics of gun ownership per se. Like everyone else, I have all sorts of thoughts concerning our collective unwillingness to do anything politically constructive regarding the American culture of death and violence. But that is not the point of this blog.

Instead, I am making a very specific appeal to a very specific audience. I am speaking here to my Christian sisters and brothers. If you are from another religious tradition or none at all, I still hope that you find my thoughts on the topic valuable or at least thought provoking. But I want to be clear that this is simply one side of an internal conversation. And in no way do I presume that it has any purchase beyond the limited confines of the Christian community.

Allow me to review the recent events that have prompted me to cast my thoughts into the digital ether. Last week, in my hometown of Colorado Springs, a man shot multiple people at a Planned Parenthood, killing three and wounding many others. Wednesday, in San Bernardino, a few dozen miles east of where I currently live, gunmen armed with assault weapons killed at least fourteen people and wounded seventeen others at a center for developmental disabilities (a facility most often used by those with mild to severe autism). These incidents are no longer hitting "close to home" in the metaphorical sense. They have landed on my front door.

To be sure, the frequency of mass shootings in the United States is alarming. Some have rightly suggested that they now reflect a well-worn "pattern." Actually, I wish they were part of some kind of pattern. But the reality is far worse. These instances of violence and murder are now ... normal.

Normalcy. The very word should cause us all to shudder. But it doesn't. It apparently doesn't matter if the victims are elementary students in Newtown, churchgoers in Charleston, filmgoers in Denver, or now, people with (or helping others with) developmental disabilities in San Bernardino. Somehow, nothing changes. It reminds me of Proverbs 26:11: "Like a dog that returns to its vomit, so a fool repeats his folly."

We are the fools lapping up our own vomit. Or, to put a different spin on it, we are at a tipping point in American culture. We are in desperate need of a wisdom that goes beyond our cultural values. Yet, tragically, the very people whose identity is rooted in a hopeful vision for human flourishing (i.e. the Christian community) seem either ill equipped or downright unwilling to draw from their own tradition of wisdom and discernment in order to address this great ill that continues to plague us.

How then can I make a compelling case for a robust Christian response to mass shootings? I suppose I could try the "overwhelming data" approach. I could list all the mass shootings from this past decade, or this past year, or just this past week. I could cite all the evidence that clearly shows that we have a real problem on our hands when it comes to guns and gun violence. And I could mount all sorts of evidence for why we as a society can and should do something proactive about it. 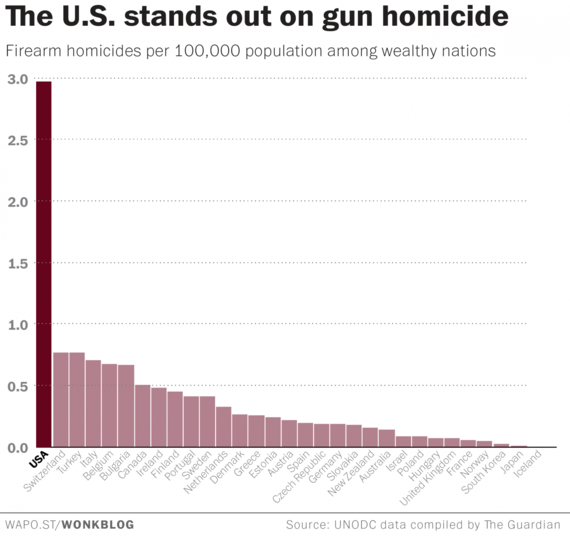 Another way to enter the conversation could be the "middle ground" approach. I could point out that, regardless of where we land on the political spectrum, we all already recognize that there should be some limits on lethal firepower among everyday citizens (e.g. no one owns rocket launchers or tanks). So I might ask, rather than arguing about whether we should either "do nothing" or "ban all guns forever," could we not talk about what the appropriate limits are in light of recent abuses?

Or maybe I could take the "historical-contextual" approach, noting how both the second and the third amendments arose from the very particular issues surrounding the Revolutionary War. Namely, leading up to the war, the British parliament banned firearms and used violent means to confiscate them from private citizens. It also passed legislation requiring citizens in American colonies to provide food and lodging for British soldiers. Both of these isolated practices of course had to stop. Hence, the language of the second and third amendments in all its historical-contextual particularity (e.g. "well regulated militias" and soldiers not being "quartered in any house").

But the truth of the matter is that many of my fellow Christians would reject all of this evidence and all of these arguments out of hand. Along strikingly similar lines, those who actually did find the data convincing would be able to affirm my take on the situation not because of the inherent merits of my claim, but because I was simply preaching to the choir. In other words, even within the Christian community, our discourse has been so fully and wholly co-opted by other, apparently more important commitments, that we can't agree on what the basic facts are, much less how to interpret and understand those facts.

So here's my question: As we consider the ways that Christians might serve as a faithful presence in a violent world, shouldn't the priorities of the church trump the politics of the state? Let me put it differently. Before I am an American, I am a follower of Christ. In fact, my identity in Christ is so far and away more central and fundamental to my life in the world that it alone is what organizes, orients, and ultimately relativizes every other possible identity that would make a claim upon me. And this includes the various entitlements bestowed upon me as a citizen of these United States.

I'm not talking here about whether Jesus was an advocate for violent or non-violent resistance, although that is certainly a related conversation. Rather, I'm simply saying that, as a Christian, my primary obligation is to stand in radical opposition to the forces of death and destruction that threaten to undo the very fabric of God's good creation, regardless of what the Constitution says I can or cannot do as an American citizen.

So it is for this very reason that I am compelled to renounce my "right" to bear arms. In doing so, I'm neither suggesting that we do away with the Second Amendment nor am I attempting to radically reinterpret its meaning. As a follower of Jesus, I'm simply rejecting it. I am choosing to no longer accept the rules of the world it has established. And I would encourage you to prayerfully consider doing the same.

Of course, the truth of the matters is that this (possibly ridiculous) renunciation of mine is not going to magically undo the gun culture in America. It isn't going to fix a profoundly broken system that has not only failed those suffering from mental illnesses but has also created the very conditions for violent extremism to flourish. And it certainly isn't going to prevent violent people from acting violently in the future, whether with guns or any other kind of weaponry real or imagined.

But that doesn't mean it is an empty or merely symbolic gesture. In fact, I think it has the potential for changing both the trajectory and the content of the dialogue as it currently exists, especially if it were something that the Christians did together. In the United States, we have the liberty to carry guns. That's not going change (at least anytime soon). But as the Apostle Paul reminds us, just because we have the right to do something doesn't mean that it is beneficial or constructive--for ourselves or for others (1 Cor. 10:23). In other words, it is the very liberty we have both as Americans and as followers of Christ that allows us (and obliges us) to live differently.

By completely opting out of our Second Amendment entitlements--by not only rejecting the rules of the game but also refusing to play the game at all--I think it might very well be possible, at least within the Christian community, to shift the conversation from our inalienable "rights" as citizens to what is ultimately "right" for our fellow human beings.

Imagine it with me, if only for a moment. Imagine a different way of being an American Christian. What if we were known not so much for our doctrinal orthodoxy, but for our political heterodoxy? That is, what might happen if we were daring enough to embrace, embody, and enact a way of life that was truly blasphemous to American sensibilities? What if, in a land where worship of the twin gods of weaponry and violence prevailed, we chose instead to serve a dis-arming God--a God who calls us daily to confront violence by laying down our lives (and our guns) for the sake of others?

Assistant Professor of Theology and Culture