Below is a snapshot of the Top Critics section of Rotten Tomatoes for the film, Sisters. Notice anything?

(*Richard Roeper's review is not included in this graphic, but is in the statistics and highlighted below.)

That seems normal for an "afraid to grow up, buddy comedy," no?

Why does this matter? Because movie reviews matter in this industry. They matter to the box office results, they matter to the ancillary revenue streams, they matter to television networks deciding how often to run the a film and how much to pay for it, and they matter to the choices made in executive suites along Barham, Lankershim, Pico, Overland and Melrose Avenue. They will swear that all that matters is the money, but when looking for an excuse to dismiss a project or a talent, buyers are perfectly happy to bring up the last time someone was panned by the critics.

And the men who wrote those negative reviews, the ones in the Top Critics section of the most popular movie review website, have been doing this for a long, long time. Every one of them is among the most respected, most read writers in the field, and I am certain that not one of them thinks that his opinion of the movie has anything to do with his gender, but IT DOES!

They watch movies with a male perspective. It is not neutral simply because it has been given the majority voice for most of the existence of commerce and entertainment. They have not been expected for their whole careers (and, in fact, their whole lives) to see the universality in stories told by and about the other gender -- as women must do the majority of the time -- or even to see them as significant, or interesting, or worthy of their time. 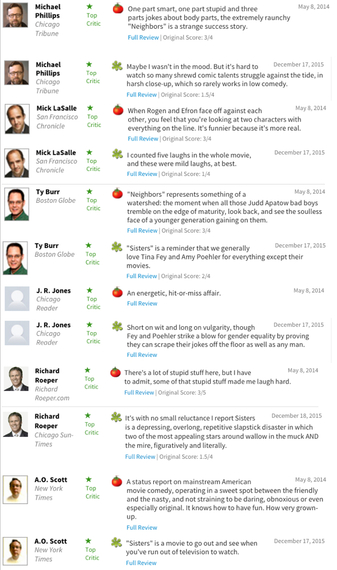 Can you see the difference in tone, between the gentle, loving, understanding way in which they embrace the male story and their condescending dismissiveness towards the female version of the same? Again, these men would never think themselves biased, but that is the insidious nature of implicit bias -- it creeps into statistics when no one is looking and on a grand scale, becomes irrefutable.

Eleven out of eleven negative reviews for Sisters were written by men.
Six of those same reviewers also reviewed Neighbors.
Six out of six of them gave that movie positive reviews.

I'm not saying that only women should review women's stories. To the contrary, I'm saying that men in the entertainment industry need to get out of their comfort zones and learn to see women's stories as equally valuable, equally worth seeing and telling.

The landscape for women in Hollywood, both in front of and behind the camera, is disastrous. Both the ACLU and the EEOC have opened investigations into the system-wide gender discrimination and the Department of Labor is on the verge of getting involved. It is ugly here for women who want to tell stories by women, about women or for women. Why? Because the men who decide not only what gets made, but the size of the production and marketing budgets continue to refuse to see themselves as biased, just like critics who see male stories as worth telling and female stories as less worthy of their consideration.

Two common excuses those in charge use are: 1) that women-lead movies don't make as much money; and 2) they have to consider international markets - namely China -- and women's movies don't play overseas.

Let's dismiss the latter first. China's highest-grossing film of all time, Monster Hunt, has a strong female lead, with actress Bai Baihe getting top billing and the story containing some very fun gender twists. But let's talk about China as a market for a moment. Two-thirds of the world's female billionaires live in China. Thirty-eight percent of executive and upper management jobs are held by women (here in the good old US of A, that number is a scant 22%). There are more salary-earning, adult women in China than there are people in the United States.

I could go on and on with the statistics of the growing wealth and spending power of women, highlighted by the fact that Porsches are available in pink there (a color not offered in any other country), but that would get repetitive. The bottom line is that the decision-makers in Hollywood are not bothering to get any real evidence beyond what they tell each other in restaurants and on golf courses, and are going to bias themselves right out of jobs when women globally start flexing our economic muscle and Hollywood is left in the dust. We are starting to see it already, and it will only get worse without a serious attitude adjustment.

The other reason they claim that female films don't get made is that they don't make as much money. This is such a spurious statistic that it would be laughable if it weren't wielded so harmfully. I wish everyone tracking rates of employment in Hollywood would please - PLEASE - stop using the information about how many of the 100 top-grossing films are directed by women. Yes, it is only 7%, but behind closed doors, that fact is turned against us, as if the movies earn less because they are made by women. If you want to honestly examine inequality in hiring and opportunity, start tracking employment of female writers and directors by budget.

How much a film grosses is in direct relation to how much is spent making and marketing it. Pitch Perfect 2, directed by Elizabeth Banks, is not in the 100 top-grossing films of all time, but it earned $287 million worldwide ON A $29 MILLION BUDGET, with a significantly smaller marketing campaign than most of its male-driven, male-directed competitors.

In fact, here are the box office results the weekend that movie opened:

Three of the top five films that weekend had female leads, two of the top five had female directors, but LOOK AT THE BUDGETS! Why is it that the highest budgets go to movies made by and about men? That is the main reason male-driven movies are so much more financially successful. Give women the money and opportunities to tell stories, on par with men, and everyone will reap far greater financial rewards for it. This is only hard to figure out for the men in charge who are dead-set against figuring it out because they want to simply keep hiring people who look like them to make movies about them that they'll enjoy without having to leave the cocoon of their own viewpoints. For the survival of the industry, this has to change.

And when the movies by and about women do come out, in equal numbers and with equal budgets, hopefully the men who review them will have evolved enough to see a woman-child doing crass, gross-out comedy with her female co-star and find it funny.

If not, then it's not the women who should be out of jobs.

Valerie Alexander is an author, speaker and filmmaker. Her books on Happiness, Success and the Advancement of Women in the Workplace can be found on Amazon, and she can be reached through her website, SpeakHappiness.com, where this article originally appeared.