I'm the girl that took the picture of the soldier and child in Baltimore that went viral. I meant to capture a sad moment, one of wasted resources and failure. Who knew that so many people think all of our race and economic problems could be solved if someone would just think to smile at a child? 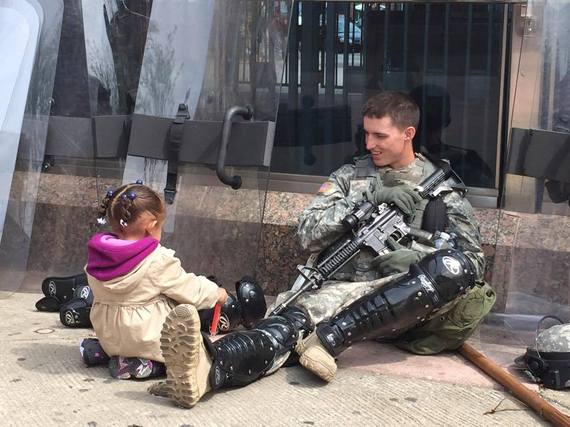 The accusations of being a pot stirrer, a know-nothing liberal, and race-baiter have been coming at me almost faster than I can read them. Good. Keep it coming. You wouldn't hate me if I didn't make you uncomfortable.

Keep telling me to forget the misery and to just see the happiness. Keep criticizing me for bringing it up. Keep talking about it because that is the first step. But let's keep it real when we talk about it.

How can you look at that picture from Baltimore and think it shows a promising future? The problems leading up to this picture continue to be swept under the rug while people mindlessly smile over a picture of a child.

How about we focus on the fact that 86 percent of public school students in Baltimore get free/reduced lunch?

How about we focus on the predatory payday loan and checks cashed establishments that people in this neighborhood are subjected to, continuing the cycle of poverty they are in?

How about we focus on the fact that I took this picture on Fulton Ave about a month ago, and how it's pretty average for much of Baltimore: 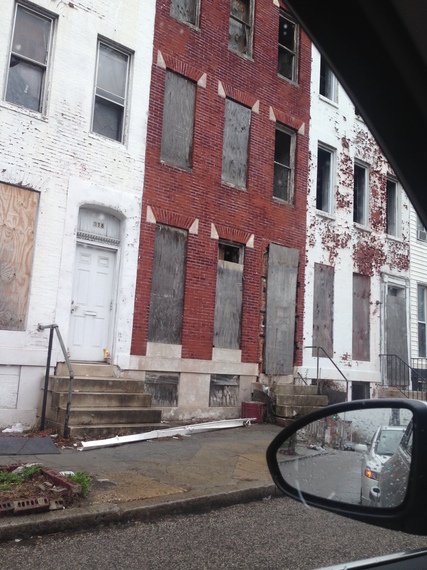 If this was a picture of a child on a field trip to the Pentagon, I'd see how it's cute. Adorable, even. But that isn't what this is. This is a community being told they are too vile and worthless for anyone to give a damn about them until they start to burn things down -- and even then, people only care long enough to be keyboard activists with uninformed opinions.

Baltimore has a lot of problems, but being a city full of people that want to loot and riot isn't one of them.

I think it's pretty clear why there was a riot on that Monday afternoon -- what did the police expect when they loaded up with riot gear, turned off public transit, didn't allow children to leave, and instigated pissed off kids? Yet here we are, painting Baltimore as a city of lawlessness.

If we're going to talk about lawlessness in Baltimore, let's talk about the millions of dollars used to settle and hide cases of police brutality.

I have watched news anchors and the Internet, in general, wonder why people felt the need to burn the businesses in the community, consequently limiting their own options of where to shop. Over my week in Baltimore, I listened to and talked to a lot of people, from those who were pro-riot to those who were pro-peace. The impression that I got wasn't that all people necessarily hate all businesses that aren't black-owned -- it's that they hate that the businesses won't pay living wages or promote people of color.

Without the ability to build capital (or even pay rent) and without the experience of being more than entry level employees, how are people supposed to start their own businesses? How will there ever be more black-owned businesses in primarily black communities?

In my opinion, the onus is now on wealthy business owners of all races in Baltimore and the surrounding area to do their part in making the city a more livable place. It's on the middle and upper middle class residents of Maryland to change the way things are run.

I saw an incredible amount of unity build up in one week of Baltimore protests -- a level of unity that is rare for any kind of movement. The revolution is here, and "us vs. them" is not going to be black vs white. It's going to the people who have hopped on board vs. those who haven't. Do not stand on the wrong side. Support the organizations that are on the ground making a difference. Support the organizations working to feed the hungry children of Baltimore and working to make the streets safe. Do not shop at places that do not allow their entry level employees to grow.

Nothing will change over night, but it's time we start working to provide education and opportunities instead of casting judgement when most of us can't even imagine what it would be like to live in West Baltimore.

A version of this post originally appeared on MandaWritesThings.com.