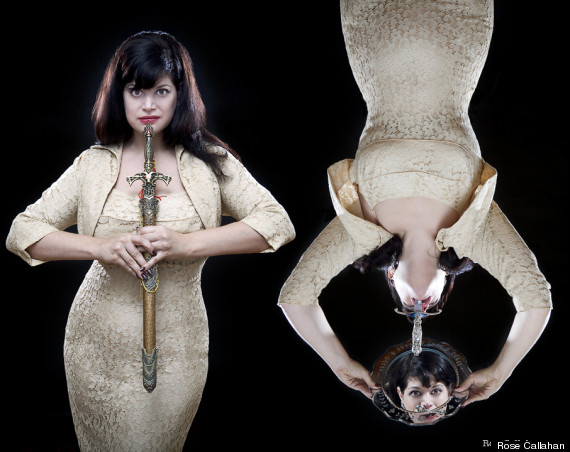 I like to joke that I am on the cutting edge of corporate speaking in more ways than one. I didn't get here because I'm particularly tech-savvy, jargon-heavy or industry-driven either, it's because I'm a professional sword swallower. I, of course, didn't set out to be a corporate speaker, I wanted to be a performer; but, somewhere between the seedy bars and the rock shows I learned some unexpected and hard-won lessons about being a working artist. I needed to draw on these skills when faced with my fist corporate audience. I -- much in the way I did when I was learning to work an audience as a fire eater -- had to start from scratch. Initially it was an intimidating process, trying to come up with the right measure of teaching and performing when it occurred to me: just be honest. Just share what you've learned in your experience working as everything from an entrepreneur to an oddity...and it worked. I knew I was making an impact when I received a surprise email from someone who'd attended one of my talks. He described it as "not only spectacular, but poignant."

I was truly touched -- I'd not only succeeded as an entertainer, but I provided a meaningful learning experience. In the end, the sideshow skills aren't even the most important skill I have as a speaker; what I've been able to demonstrate is that I have a valuable story to tell and a new way of telling it. I'm taking my experiences in both the corporate cubicle and the center ring and translating them into lessons about creativity that anyone can put to use in their own professional lives. This is why I'm proud to be a founding member of the Alternative Speakers' Bureau. A small professional speakers program that all began with one little paper cutout skull, and has led us into the boardrooms and training centers of Fortune 500 companies across the country.

Created by brother and sister team, Noah and Mica Scalin, Alt. Speakers' grew out of a creative challenge Noah gave himself as an artist and professional designer: namely, could he create a different skull-shaped object every day for an entire year. A simple idea, but one that founder Noah Scalin managed to grow his skills as an artist, expand his client base, publish three books on creativity. A few years and thousands of travel miles later, he's managed to extend his personal test in to a giant inspiration boost for businesses big and small. Seeing how much these businesses valued Noah's perspective as an artist in turn, inspired them to recruit and train other artists and Alt. Speakers was born. Our talents are unusual (e.g., a tap dancer, a stand-up comic, and a human beatboxer, among others) and our stories are not typical motivational talks. We use our unique skills to grab people's attention but also as powerful metaphors to explain how creativity is actually practiced.

Mica Scalin, Alt. Speakers' Co-Founder, is an artist, who had long worked in the nine-to-five professional world drew on both experiences as she developed the idea of creativity training for conventional businesses, "I think the leadership in every company understands that creativity is important but its too often just an abstract idea," she says. "I have been in a lot of work situations where employees were told to 'think outside of the box', or 'be creative' but just aren't given anything beyond that to help them along." That's where we come in. as a corporate speakers and teacher; I use my personal story to inspire people at these businesses to be brave enough to make that leap and become fearless innovators.
I think of that often and I feel a special kinship with a lot of the people I work with, because I wasn't always the "The Lady Aye -- Sweetheart of the Sideshow," for a long time I was just plain-old "Ilise S. Carter, Copywriter." Unsatisfied and untested as a creative employee, I "ran away" with the circus to find my creative outlet and my own voice. In those days I took great pains to keep my two identities separate, so my unusual passion wouldn't interfere with my day job responsibilities and vice versa. So, I find it odd, exhilarating and inspiring that I had some of my greatest professional success combining those two sides of my identity. It's a triumph that makes me want to ask all of our clients, "how can we help you find your spotlight?"