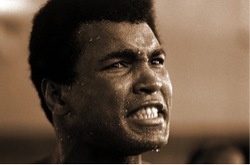 Walter De Brouwer and Niels 'Shoe' Meuleman (see link below to the Louis Vuitton movie) had a creative agency in Amsterdam. The fight between Muhammad Ali and George Foreman in Kinshasa, Congo, made a formative impression on them.

Creative destruction, the duty of startups to dash big corporations, mostly associated with Joseph Schumpeter, is escalating in Silicon Valley and starting to give rise to an entirely new kind of company.

These companies are about speed. Twenty years ago, we fought about the last mile to the home of the consumer. Now, it is about the last second of their attention deficit. Continual partial attention is official. Texting has reformatted our brain. Google has destroyed distance. Twitter has destroyed time (news is now being crowdsourced and delivered 10 seconds after reality and well before CNN).

More and more it is about speed for the sake of speed, often without visibility or absolute control; it's about going faster than the market in a time when the market goes faster than companies. These companies survive instability and recover from turbulence and volatility. They become fluid and untouchable. Speed is their format, their content often mysterious and evanescent, matter going into time. Their atomic clock speed only registers the hypernow. They put electron microscopes on one customer at a time, they work in the one-to-one future with massive parallel resources, canvassing their audience, as in a presidential election where every vote counts and the whole process is quantitative. They become superconductive and superfluid, frictionlessly settling in our wired homes and our online bank accounts.

These companies are non-linear. Linear is dead. Linear is not Silicon Valley. It is the Post Office or the Caltrain, anything that has to go from A to B. Sure we all have to go from A to B too, but it is only a small portion of what these companies do. They are constantly adapting to their environment via complex feedback loops with millions of agents acting and reacting upon each other. Complex adaptive systems are messy. We don't like messy but we live in it. Life is neither clean nor simple, our desks, our solid state, our devices, our bedrooms and our garages are what it is really about: messy and noisy, dark forms of complexity.

These companies have given up perfection. The imperfect cannot be avoided at that speed. Perfect enough is the new norm, suboptimal is the goal. These companies do not have a master plan, they scrum a 5-year business plan every day and their fuzzy ideas emerge and self-organize into a valuable dissipative system. They co-evolve with their competition: every move forces the others to evolve again, so that they too have to evolve again to ensure the best fit until exhaustion brings them to equilibrium where heat death waits. They sprint from one death march to another. The only comfort is that when failure comes, it is cheap and it comes fast. It just happens.

These companies are about consumers. They are seriously fanatical about it. They have no plan B. They feel consumers are getting vocal, that they are ready to go for a new form of engagement with their brands, ready for vigilant commitment. These companies make the cognitive process of decision making transparent. Think of the restaurant experience: a Michelin star is great, but what does 'Yelp' say, how far is it in 'Google maps' and is there a table free in 'Open Table.' This has greatly expanded options for our elimination process. Restaurant attendance is going up in a stellar way, and food is getting better. Friction has been replaced by ultrafast and omnipresent decision tools.

These companies are about prosumers. Think of UberX, a great hit with students. They use it abundantly until they run out of money and become UberX drivers themselves for while until they again have money to be driven. One could argue that they are driving themselves in a system for which they pay themselves. Companies like Uber have turned their audience into a source of information that is used in a new symbiosis of commerce and guess what, consumers love it.

These companies dance with survival and surprise. They produce a Cirque de Soleil of serendipity and diversity that keeps people mesmerized as if they binge-watch a fight of Muhammad Ali. Ali warped fights, he intertwined, he implicated the audience in his dexterous dance with multi-faceted approaches. He used recipes that were unfalsifiable. Ali believed that if you were not visible, you did not exist. He was the greatest, he was fast, he was unpredictable, he was a poet and he could dash. He understood entertainment.

This post is part of a series produced by The Huffington Post and SXSW, in conjunction with their annual festival (March 7-16, 2014, in Austin, TX.). To see all the posts in the series, click here; for more information on SXSW Music, Film and Interactive, click here.