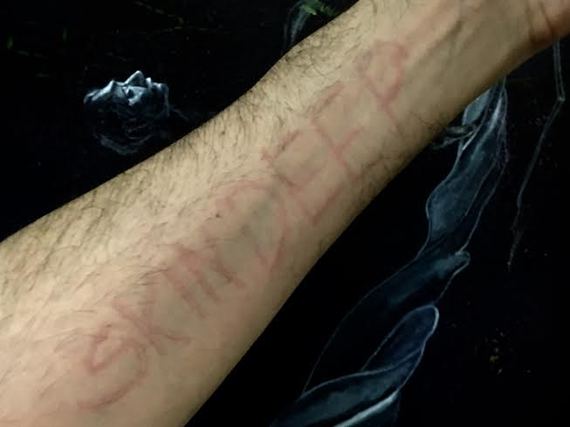 Dermatographic urticaria, or "skin writing," is a condition that causes local hives-type inflammation where the skin is touched. This photo was taken moments ago, about a minute after very lightly scratching the words onto my arm. It will get puffier and puffier, look more like a scar, over the next half hour, and then it will go away. Chameleon karma? I am the Lizard King.


During lunch with friends yesterday, conversation turned toward a sensitive topic -- skin sensitivity due to allergies. One of my friends once ate something that caused her to break out in hives, and she told the epic story of going to the drug store with an inflamed skin and buying Benadryl, which made the hives go away. She smartly has never eaten that food again, despite temptations.

All of us had had a similar experience of some sort throughout the years: Another friend nearly passed out from a food allergy once.

As soon as the conversation flared up, my hackles raised themselves. Here it comes, I thought, brace yourself. I've learned over the years that I'm by most people's measures overly sensitive -- emotionally speaking, just as my skin is overly sensitive, physically speaking. At a certain point, I realized the discussion was going to keep going, delve more deeply into "gross" skin problems people have experienced. I decided to let everyone know that many of these "gross" problems are the skin I walk around with all the time -- I am made out of this disgusting material that so alarms them, so maybe be a little sensitive. At the same time, I had to dial down my own sensitivities. This is a skill that has been developed over a lifetime.

I have Lyme disease, along with a common but rarely discussed co-infection called bartonella. Probably because of these infections, which have been in my body for the better part of 20 years, I've had sometimes-debilitating neurological and rheumatological symptoms, psychological manifestations that have indeed caused emotional imbalances (we'll get to that). All of these are common to Lyme and bartonella, and some to another increasingly prevalent infection, babesia. But I also have skin problems, and since skin is the organ that we present to the world, these problems have been the most emotionally difficult to deal with. The time my left leg stopped working and I had to hop down a 200-step escalator (it was broken) on one foot wasn't nearly as alarming or humiliating as many of my skin problems.

The photo above shows, on my arm, taken just now, the manifestation of a surprisingly common condition called dermatographic urticaria. That's fancy Latinate medical jargon for "skin writing." The writing on the skin is actually a hives reaction -- with the lightest scratch, my skin becomes red and inflamed, just where it was touched. This can be "cool" or "gross" depending on the witness, but fortunately it only lasts 30-60 minutes and then the skin settles back down. Occasionally, triggering the skin writing also triggers a major hives outbreak elsewhere that requires an antihistamine.

Almost all my insecurities have to do with my skin: I had terrible, terrible cystic acne as a teenager that left deep scarring (similar to singer Seal's scarring, which often has been misattributed to some kind of tribal ritual scarring, but which actually is the result of discoid lupus). You can imagine how sympathetic my peers were in middle and high school; adults weren't always better: at my first job as a clerk at Blockbuster video at age 17, a middle-aged woman gasped and asked me if I was in a fire, and if not, what happened to my face. That stung. I cried, of course, and then I learned to deal with it.

Almost certainly as a result of the damage caused by Lyme and associated diseases, my skin has become a billboard of all sorts of exotic health conditions. Beyond the hives, which I first experienced in a Chicago hotel in 2010 -- coinciding with the first major neurological problems I began to experience -- I've got what are called either "rashes" or "lesions" from my shoulders to my knees. They look like stretch marks: My knees look like they gave birth to triplets. It's gross, to be sure. I'll never wear a bathing suit again. These have been commonly associated with bartonella, although as with all things Lyme-related, the jury is out; still, pretty conclusive evidence was found when bartonella bacteria were cultured from a skin biopsy taken from a little boy covered in "stretch marks." These marks first presented on my trunk when I was in my late teens and barely overweight, certainly not obese. In my early 30s, again around 2010, these stretch marks began to appear with no obvious cause on my shoulders, and then under my arms, my flanks, my sides... my knees. My knees, it should be noted, never have been even remotely fat or pregnant. These rashes at times sting and burn like they're laced with acid, and always all at the same time, all over my body, usually for days or weeks, and then they don't anymore. It's pretty freaking weird. 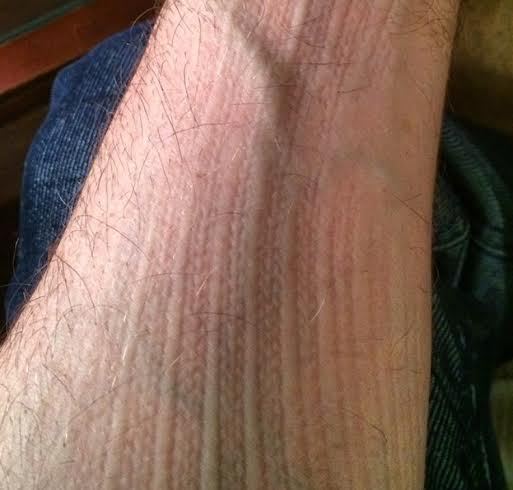 This is what my arm looks like underneath a ribbed sweater. If you saw an octopus do this, you'd think it was cool, wouldn't you?


So when my friend was telling her story, I became a little self-conscious, sitting there with my acne-scarred face and concealing what are by normal standards grotesque skin problems. My feelings began to feel hurt, especially when she described walking through a store feeling like everyone thought she had some kind of contagious, deadly disease. Yeah, that's what it feels like. But my feelings didn't really get hurt because of a lesson I finally learned a few years ago.

Someone -- another gay man, who is younger and who has flawless skin -- told me one day out of the blue, "You look like a lizard." I. Lost. My. Mind. I walked away as quickly as I could -- to go cry. However he meant it, it was a direct bolt of lightning into my deepest insecurity--my appearance in general, my skin specifically. I was in my 30s, my emotional stability almost certainly thrown a bit off kilter by inflamed brain tissue, and I wanted to kill myself. Over one ridiculous remark. Rationally, I knew it was childish, but psychological traumas tend to ignore reason. I've brought up this incident far too frequently to the person since then, and he has apologized (he swears he didn't mean it the way I took it, which I now choose to accept, although I don't get how "you look like a lizard" could have been intended in a friendly sense), and now I've had to learn to turn my emotions on and off when it comes to these sorts of things.

Sometimes fantasy can save us. 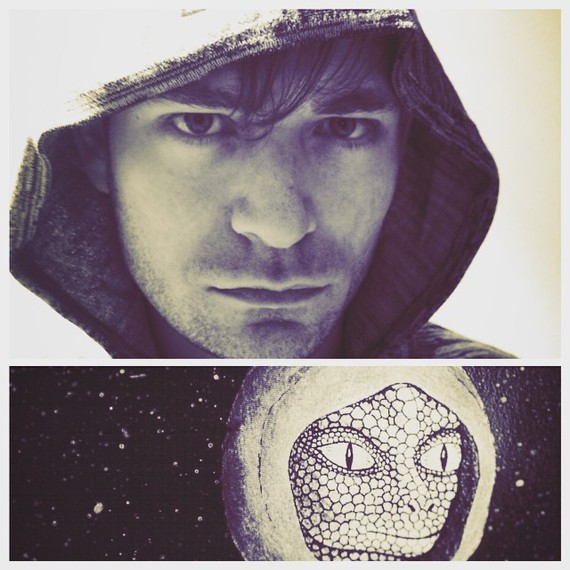 
I am the Lizard King. In some random Internet finding, I have over the years stumbled upon conspiracy-theory websites on which people write about a "Reptilian" extraterrestrial species that populates the planet. Among their purported traits, depending on the source, are: a lower than average body temperature, social awkwardness/inability to connect with people intimately, "emotional roller coasters," Rh-negative blood types, above-average IQ, pale eyes, pale skin... unusual skin scarring that appears with no known cause. Oh, my God: I look like a lizard because I am a Reptilian extraterrestial!

You heard it here first. Mind you, none of the rest of the Illuminati lizard people have made contact with me yet to let me know the nefarious world-conquering plan, but maybe that you-look-like-a-lizard remark was a way of tipping me off. If so, does writing this make me a whistleblower?

OK, no, I don't believe this -- but actually, just reading that alternate reality into which I seemingly fit better than this one in some cases made me think about how I behave. You know, being a lizard may have its merits. I've always been sensitive, overly so according to many, and I've unrealistically expected others to be likewise sensitive, and also empathetic and compassionate. But that's not realistic, and even rationally, I know that a lot of hurtful remarks are made naive of other people's unseen struggles. You can't blame people for that.

Years ago, feeling my worst, I typed into Google: "My skin is a curse." I was astonished -- absolutely astonished and ashamed -- that many results came up, and almost all of them were written by people with dark-complected skin who confessed they hate their bodies and feel cursed by them. Oh my God. I had no idea -- none -- at the time that people with perfectly healthy, flawless-looking skin might be insecure because their skin is darker than other people's. I, sadly, understand in some ways why this is: I've learned a lot in recent years about the different ways by which darker and lighter people are treated by authorities, by one another, even within their own families in some circumstances. To my eye, the darkest unblemished skin is enviable and something I would sacrifice a lot for. Reading other people's insecurities has tempered my own.

In the end, we're physical, mental, and spiritual beings. People see our skin first, and many interactions are only skin deep. Our skin serves many purposes. One of these is to protect us, to serve as a shield. When your shield is used by others to hurt you, it stuns you, but if you survive, you learn to set up other protections. Time helps with this.

I'm no longer ashamed to be in public with my skin ailments. If they alarm people, so be it. If someone comments to me, they'll be guaranteed an in-depth lesson on Lyme and associated diseases. And when people naively, ignorantly, unthinkingly, call it what you will, discuss their personal experiences authentically in such a way that accidentally offends me, I'll point that out, hoping they'll maybe be a little more empathetic before calling something that might plague someone else "disgusting," but it doesn't really hurt my feelings anymore.

After all, I am the Lizard King. I can do anything.