One month ago, I had never even heard the term "sandwich generation." Now I'm living it. If you're unfamiliar with the term, you're not alone. But I'm a fast learner so now I'm hip to the term. Basically it means you have children you're caring for AND parents you're caring for. 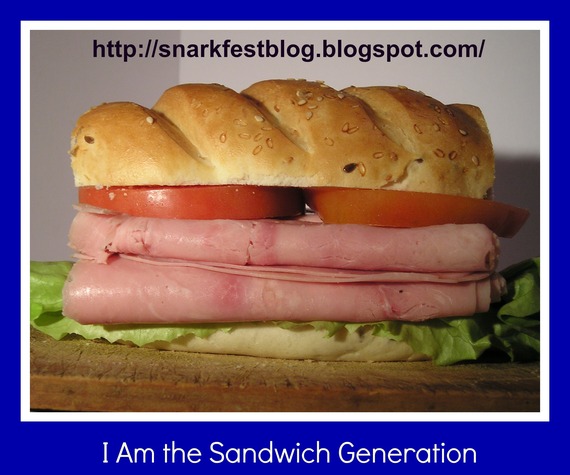 I've talked before about my Mom's battle with COPD, a battle that she's slowly losing. But just over a month ago, she fell and broke her left humerus. Snapped it like a twig when she was walking into the bathroom in the lobby of her building. After a 4 day stay in the hospital, they moved her to a rehabilitation facility where she stayed for exactly 20 days (the maximum amount of time that Medicare would cover).

After 17's high school graduation, we had a bit of a reprieve from schedules and running here and there. 17 is working now, mastering the art of the perfect DQ Blizzard and getting mentally prepared for life as a college student. 15 has been enjoying sleeping in and not being responsible for much other than her daily 'to-do' list. My focus hasn't been so much concentrated on parenting my teenagers as much as it's been caring for my own Mother. It's a scary proposition for me. I thank God daily that I've got good kids. They are responsible, well-mannered and usually trouble-free (unless you count the daily school bus drama but we're not talking about that right now). They are at a very self-sufficient age which has allowed me the freedom to concentrate on my Mother's healing.

I spent all last week with her, setting up appointments, scheduling home health care workers, physical therapists, doctors and nurses, running errands, picking up prescriptions, doing her laundry and preparing her meals. I jumped into the sandwich generation with both feet. I am the meat in that sandwich. And it scares me to death. I ached to be away from my girls for so long but it was something I wanted and needed to do, to care for my mother.

I cannot begin to imagine how this would all play out if my kids were delinquents. But I am blessed that they aren't. I learned parenting from a fantastic teacher, one who needs me now more than my own children need me. And now that I am home, 4 hours away from my Mother, I ache to be with her. My heart hurts to be so far away from her. Our twice-a-day calls will need to be enough for now. I constantly remind her to check the schedule we've written up so she knows which home health care worker will be coming in, or what time the physical therapist will come. I remind her to make sure she has her bag on the doorknob for Meals on Wheels delivery. And I worry.

I worry that she's alone in the apartment all weekend long. She is no longer capable of using her walker because of the broken arm. Once it's healed up, she will be able to walk down to the mailbox for her mail. But with a broken arm, she cannot push the walker, and the walker holds her oxygen tank, and without the oxygen there is no breathing for her. She uses a cane to get around her apartment.

I can't remember having so much fear. When I had my babies, I feared that I'd fail, but I didn't. I succeeded and still continue to succeed as a parent. I am blessed. But the paralyzing fear that my Mom isn't safe, it's something I never knew I'd have and it's an awful feeling. I pray that she'll eventually want to come to live either with us or closer to us. That door is always open to her, and I hope she changes her mind, and I hope it doesn't take something drastic like, God forbid, another fall to make her change her mind.

Until then, the twice-a-day phone calls will have to suffice, and the prayers continue for her safety.

More:
ParentsSandwich GenerationParenting
Newsletter Sign Up
Raise the kind of person you'd like to know
Subscribe to our parenting newsletter.
Successfully Subscribed!
Realness delivered to your inbox