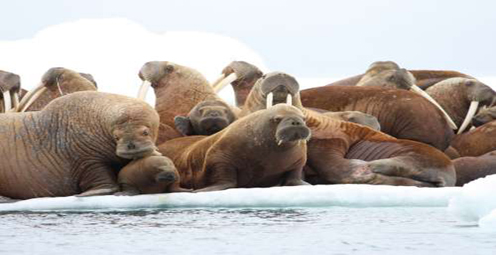 We're all the walrus. And right now, things aren't going all that well. Over the past several weeks, some 35,000 Pacific walruses in Alaska have climbed out of the ocean -- where the Arctic sea ice they need to survive is disappearing at a break-neck pace -- and crowded themselves onto a beach.

They're only the latest in a long-line of victims in the climate crisis. Arctic sea ice is now at its fourth-lowest level in recorded history (the lowest was in 2012), more than 700,000 square miles below average ice levels, an area bigger than the state of Alaska.

Making matters worse is that, less than 100 miles from where the walruses have hauled out, Royal Dutch Shell is now drilling for oil despite overwhelming public opposition. President Obama approved this project even though there's a 75 percent chance of a major oil spill that would kill walruses, polar bears, and other vulnerable Arctic wildlife.

But here's the truly maddening part. The disappearing sea ice is only increasing the accessibility of Chukchi waters to dirty drilling. So now that the planet is warming because we're burning too much fossil fuel, we can drill into the world's largest untapped pool of oil and burn that, which will accelerate the loss of ice at both poles and around the world, sending average global temperatures soaring.

President Obama knows this, and he just spent four days in Alaska talking about it.

"We're not acting fast enough. I've come here today as the leader of the world's largest economy and its second largest emitter to say the United State recognizes our role in creating this problem and we embrace our responsibility to help solve it," Obama told an international conference of countries with interests in the Arctic.

But if I am the walrus, even that urgent call to action may be too late for me, particularly without the actions to back them up. It's an incredibly dangerous situation when tens of thousands of walruses haul out of the ocean at the same spot at the same time, as we've seen in past years. If they get spooked or startled, they'll stampede back into the sea and hundreds will die, as we saw near this same spot in 2009. This phenomenon of massive walrus haul-outs has become common, but it only began in 2007, when Arctic sea ice took a precipitous drop.

Global warming hasn't caused humans to take such desperate measures yet -- though some low-lying atolls and Alaska coastal villages are now readying for their imminent displacement, and there's even some reporting linking Syria's crisis to climate change -- but we know what's coming.

The most widely cited estimate of "climate refugees" -- those displaced by rising seas, natural disasters, droughts, loss of food and water supplies, or other causes directly related to climate change -- is 200 million people by 2050. That's about one in every 45 people, given current population estimates. And that figure could rise toward 1 billion as the seas continue to rise and civil unrest takes hold in a destabilized new world. (By way of comparison, multiply today's heartbreaking refugee crisis in Europe and beyond by 200 and you begin to get a sense of the scale of what we're facing with climate change.)

We're in this together, us and the walruses. But we're the ones who can make this problem better or worse. I can easily imagine the solid ground that I now stand on disappearing, and being forced onto an unfamiliar shore with thousands like me, disoriented, scared, and facing an uncertain future.