Coming of Faith brings the voices of Muslim American women to the world through multidimensional storytelling and empowerment initiatives.

I am who I am, when I am the best version of myself.

"Where are you from, sister?"

This is probably an innocent question, but I don't know when I've ever viewed it with anything less than stress and trepidation. When around many of the Muslims I meet, the question suddenly and obviously means something along the lines of, "Where are your parents from?", "What is your ethnic background?" or "What language do you speak?" To me, it reminds me of what and who I'm not, what I don't speak, what I don't know and where I'm not from.

When pressed, I usually used to answer something along the lines of, "My father is Egyptian, my mother is American." This answer, of course, is wrong on many levels (not least of which being that Egyptians in the U.S. are often American citizens as in the case of my father, and that few Americans are indigenous to this country; my mother's family emigrated from Italy). Oftentimes, I simply want to run away from this question and just say "I'm Muslim!" For a little while, I tried to put my mixed heritage on the back-burner. But I clearly have some issues with avoidance.

"You don't speak Arabic? How can you be Egyptian?"

I remember all of the events and programs that I used to go to at various mosques near where I lived; sometimes I would visit my friends from other towns and we'd meet up at mosques near their houses. Sometimes I felt like I knew even less about how to introduce myself than they did. I felt like I was always waiting for someone to ask me where I was from or what I was doing there, like I was constantly in disguise and the goal of the event was to figure me out in order to win a prize (*hums: One of these things/is not like the others/one of these things/is not the same*). I still feel lost sometimes at these events, even after Jummah prayer or during Taraweeh in Ramadan, I see that the Aunties and the Khaltus can all tell that I feel out of place, that I'm not "in the know." Instead of receiving their warm hugs, I'm awkwardly on the other end of a painful sideways-arm-movement-thing. Or worse...a handshake.

I'm a Muslim-American just like everyone else at the mosque, but I'm also, well...not.

"OMG, I totally knew that you were white."

I remember when someone told me this. It was somehow a crushing blow at the time. I mean, I don't know why I was so ashamed, since I am half-white. But somehow I felt like being Egyptian, being not white, was meaningless. I was just white to this stranger I had just met. This stranger suddenly knew I was white. I didn't even know who I was. Should I believe this stranger? She seemed more sure than I did.

"Wait, I thought you were [something else]."

I can't count the number of hours that I've waited with (literally) bated breath, hoping and praying that someone will say "Of course you're Egyptian! I could totally tell." But I think what I've really always wanted to hear is, "You belong with us. You are who you are and that fits perfectly with who we are, too!" I don't know who the "we" is, but I'm pretty sure whomever they are, they don't exist. Even if by some crazy chance they do, I'm done spending all my time waiting for them to show up.

Everyday for me is a challenge to remember that I am more than the sum of my parts-not just half Egyptian and half white, but fully Safaya.

I am working on changing my answers when strangers at the mosque, or Muslims I just meet, ask me where I'm from. But the most important thing I know I will ever work on is living up to my identity as a Muslim.

Safaya Fawzi is a recent graduate of Wellesley College, having majored in Political Science. 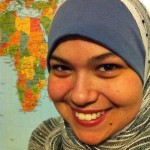 In addition to all things political, Safaya spends most of her time trying to convince herself that writing cover letters is more exciting than writing articles for Coming of Faith. Safaya is a member of MuslimARC (Muslim Anti-Racism Collaborative), and is passionate about issues of racial justice in and outside of the Muslim-American community, as well as making mosques more disability-friendly. The culturally confused daughter of a white convert mom and Egyptian-American dad, Safaya's writing can be found on Coming of Faith's "Fly Me to the Moon" column. Follow her on Twitter @Safayeah.

Coming of Faith is a media company by diverse millennial women, for the world.