The art world is a swiftly flowing river. The currents shove every artist along, indiscriminately, at a fast clip. A few pass by twice while most flow through only once. Sometimes, an artist can get lodged along the riverbank, snagged onto a hold. Sometimes that "new land" grows into a promontory. Most times, the pull of the river yanks an artist back into the flow and out of our sight, never to be seen again. 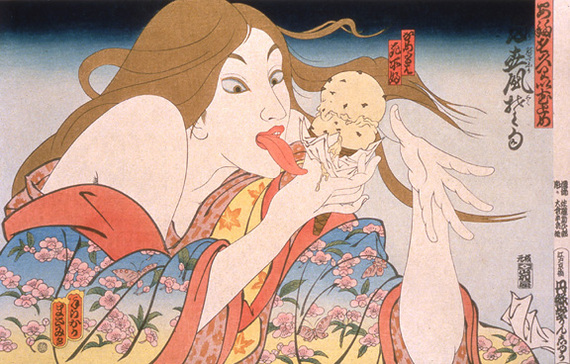 That said, I still don't understand why Masami Teraoka is not better known. His talent is unbelievable and incredible and worthy of our rapt attention. Not only is his technical skill exemplary, his interests and ideas are smart, fascinating, entertaining and with varying degrees of humor. He is a quiet warrior. I love the guy.

Most of you will never know that his show at the Honolulu Museum of Art is titled "Feast of Fools: The Triptych Paintings of Masami Teraoka."

As an artist once based in Los Angeles, we were always having a never-ending dialogue on the benefits or detriments of moving to New York, the art world citadel of the universe. Los Angeles based artists would never have the advantages and attentions that a New York artist would. From the Sixties to the recent present, this has been a much talked about topic. (Today, New York no longer seats the art world, a revolution of city gentrification, the fun of art party fairs and the easy-access of the internet.) 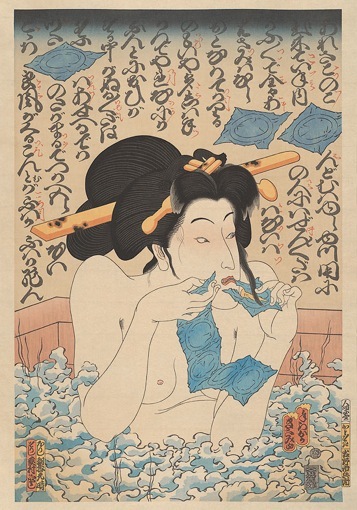 Within the language of the art world, if LA is backcountry, then how far removed is Waimãnalo?! Teraoka lives on the Hawai'i island of O'ahu. These islands are remote. Messages are still sent by ship and bottle.

Whatever the reasons, Masami Teraoka is sublime in every way.

Following are some fascinating insights from curators, editors, columnists and contemporary artists. Below, they ponder the question, "Why isn't Masami Teraoka more famous?"

"We were neighbors, in Baja Santa Monica, on Main Street, way back when. His studio became Wolfgang Puck's restaurant. I saw a show, a year or two back, at Sam Freeman's (Santa Monica gallery). I knew him, but not well. I'll bet Gajin Fujita knows him."
James Hayward
Los Angeles based Artist 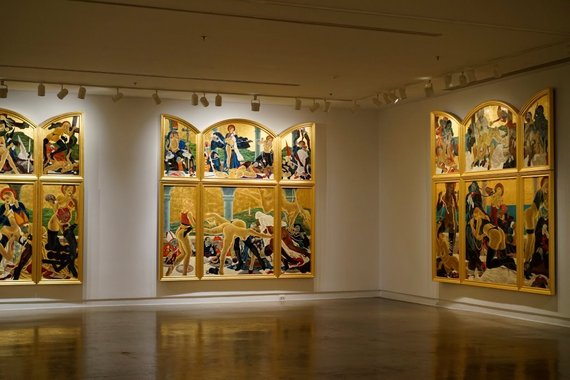 "Social Media?" answers Gajin Fujita, in an interview with the artist, "I mean he was doing things I'm doin' way before me..." He is smiling. "His style has changed dramatically...all the... All that bright color went dark. Golden. Brown..." Fujita laughs with self-knowledge, "Shakin' his skeltons!" I know. I mean, I dunno... He's the quintessential artist. He's original. He doesn't paint for others. He paints for himself. He's not bombarded from..." The street-influenced artist pauses and laughs loudly sayin', "He'd be doin' some crazy ass shit!" We both laugh, knowing that Teraoka is an iconoclast and a sleek fighter. Fujita continues, "I kneeled before him many times."
Gajin Fujita
Artist
LA Louver Gallery

"The question is a curious one. Being an art world player is different than being a great artist. Understanding how a community and system works doesn't make one a good or bad artist necessarily, just that you understand the rules of which professionals in a certain group function and how to navigate that either for the advantage of oneself or one's cause. What makes a good artist is defined by each of us singly, something like a consensus (something like fame) is reached over time, but this is usually only half-right and generally in a state of pretty much being constantly rewritten until that generation no longer feels relevant to the present one, and even then small gangs of scholars will argue for millenia if allowed to. These works by Masami Teraoka, that I've only seen on a screen, look beautifully wrought. It would surprise me if Masami didn't have financial support to continue the work, and in the end, what more could any artist ask for."
Andrew Berardini
Curator, Editor and recipient of an Andy Warhol Grant for Art Writers
Visit andrewberardini.info 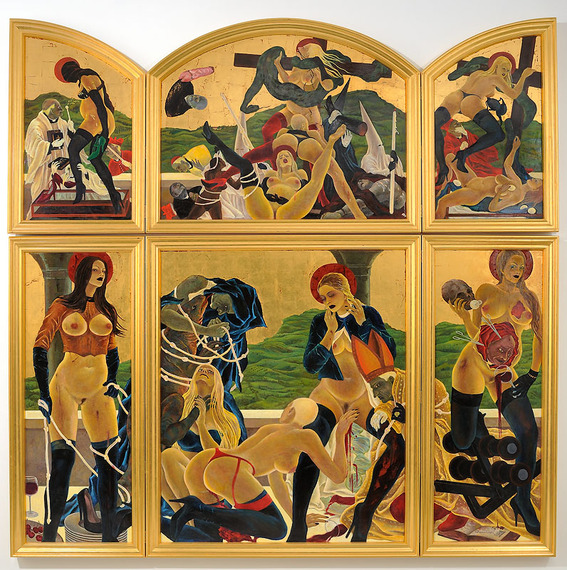 "(I) don't know why he isn't more famous but at one time, in the early 1990's, he burst on to the scene like a fireball. His Japanese print parody style was the biggest sensation the art world had experienced in a long time and he seemed destined to be at the very top for eternity... To me he is."
Greg Escalante
Curator and Co-Founder of Juxtapoz Art Magazine

"We have represented Masami Teraoka's work since 1997. I was first introduced to his work while studying art history at the University of Pennsylvania in the 1980s and it had made a strong impression on me at the time. I remain incredibly honored to work with him.

"There is a lot to say about Teraoka's practice, the way the ideas conveyed in his work anticipate concepts like globalism, for example. And there is a lot to say about Teraoka himself. How brave he has been to abandon the ukiyo-e based works on paper that made him so visible as an artist in the 1980s for a style that is in a more western tradition and rendered in oil on panel or canvas. Teraoka also engages with extremely challenging topics that not everyone is comfortable discussing let alone seeing depicted in an artwork, such as the sex abuse scandal in the Catholic church. 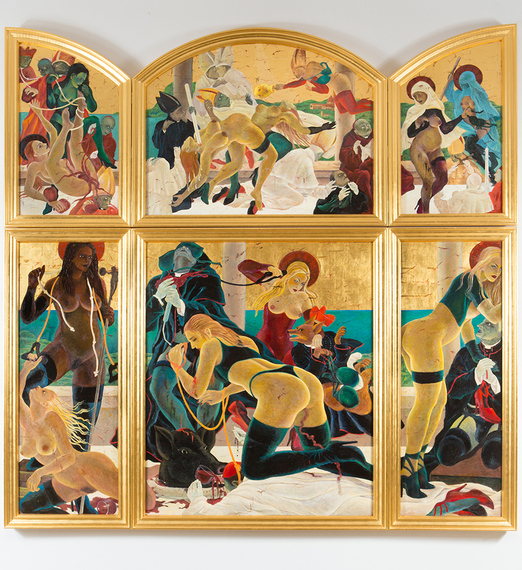 "As I am sure you are aware, the art world is fickle, and yesterday's rock star is often tomorrow's busker. The reverse is trie as well. Teraoka has had his moments of stardom, like his 1979 solo exhibit at the Whitney Museum of American Art. Many a curator has told me that someone should do a career retrospective, and whomever chooses to undertake that exhibit would put his/her name on the map in so doing. I certainly hope that will happen and there is no doubt that Teraoka's work and career, now spanning more than four decades, merits that kind of thoughtful and in depth consideration.

"In the mean time, I continue to pursue other exhibition opportunities for him. Teraoka has a solo exhibit titled Feast of Fools consisting of newer work and opening at the Honolulu Museum of Art, Friday, May 29. A survey exhibit of his work will open at Cal State Fullerton in 2016 with an attendant catalogue. The exhibit will travel to the Crocker Art Museum, Sacramento. They just acquired a significant work from Teraoka's AIDS Series, which is currently on exhibit in their contemporary gallery. Catharine Clark Gallery (my gallery) presented a solo, retrospective of his work from the 1960s to the present during Miami Basel at The Miami Project last December, and placed several works in museum collections and in significant private collections. But yes, Teraoka should be better and more widely known. I have confidence that will be the case in coming years."
Catharine Clark
Director
Catharine Clark Gallery, San Francisco and New York 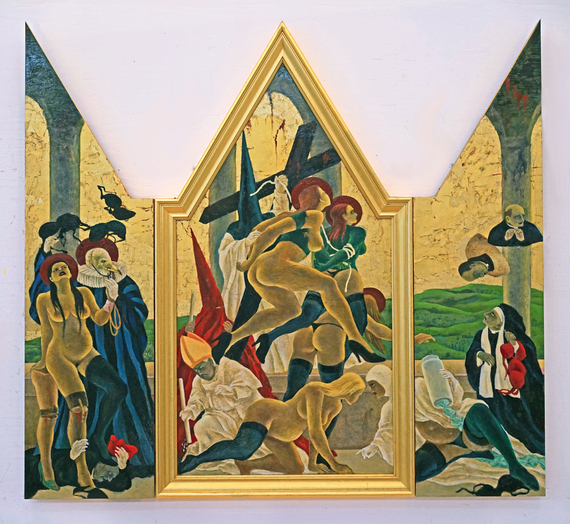 "I think the word "famous" is quite a subjective term. It is one that is constantly changing in the contemporary art world, very much in reaction to the larger arts ecosystem of the market, what influential critics are writing for noted publications, the power of passionate collectors on the sidelines willing to offer the kind of financial support that is needed these days to mount major museum exhibitions and working with "tastemaker" curators. Undeniably, I think Masami, who I have the pleasure to also call a long-time friend, is extremely well-represented in major institutional collections around the world, including the Met, Tate Modern, Singapore Art Museum, LACMA and our very own Honolulu Museum of Art. To my knowledge he is really the only artist living and working in Hawai'i today who is routinely sold in auctions run by 'The Big Three' (Christie's, Sotheby's and Bonhams). Unfortunately, nationally and particularly internationally, there is very little awareness on contemporary artists from and/or working in Hawai'i. When I'm attending global art events or at a conference, whether in London, Hong Kong, New York, Venice, or Dubai, I often get into conversation with someone and Hawai'i inevitably comes up (particularly over the past year as we build up momentum for Honolulu Biennial 2017) and on the rare occasion that the person I am speaking with does have some awareness on Hawai'i's art scene, most of the time, their only reference point is Masami Teraoka or POW!WOW!"
Isabella Ellaheh Hughes
Co-founder, Honolulu Biennial Foundation

"I agree, Masami should be more famous for his body of work and I don't know why he isn't. Maybe his more recent Catholic works are too angry or shocking? It's hard to believe that's the case in our day, but perhaps. In any case I'm a life long fan of his work."
Sandow Birk
Artist
Coming soon to the OCMA, the epic: "Sandow Birk's American Qur'an"
Visit www.sandowbirk.com

As I stand before the high court of art world opinion, I rest my case. Masami Teraoka is worthy of our greatest attentions.

Gordy Grundy is an artist and arts writer. His visual and literary work can be found at www.GordyGrundy.com.