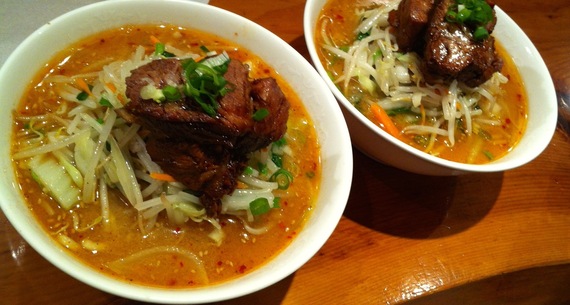 When I arrived in Tokyo, I already harbored a deep love for ramen--the Japanese noodle soup with an increasing fan following in America. But I soon discovered I had a very narrow view of the tasty dish. Having only previously eaten ramen in the U.S. and France, I was exposed to a limited range of flavors, and I wrongly assumed that there was little variation on the basic broth, noodles and side of pork combination.

My friends, there is an entire world of ramen in Tokyo. A beautiful, delicious, calorie-heavy world that I readily embraced with arms (and mouth) wide open. In three weeks, I tasted more than a dozen varieties in the city's ramen shops-- here's what I learned. 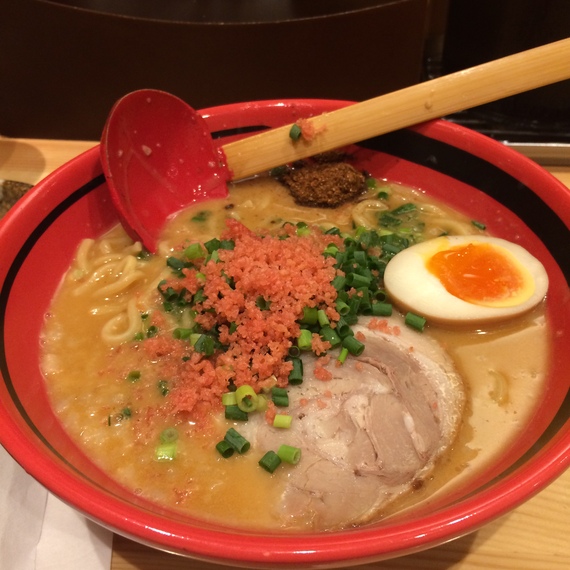 There are as many kinds of ramen as stars in the sky
Ok, that may be a little overly poetic (ramen deserves it IMO), but I was shocked at the amount of combinations and types of ramen I had never heard about.

Each shop tends to have a specialty it's known for--extra thick noodles, a touch of Japanese citrus, perfectly slow-roasted chashu pork. I'm sure you could eat for a lifetime and never try all the varieties, so I'll just tell you a bit more about the three types I named above, because they surprised me the most. 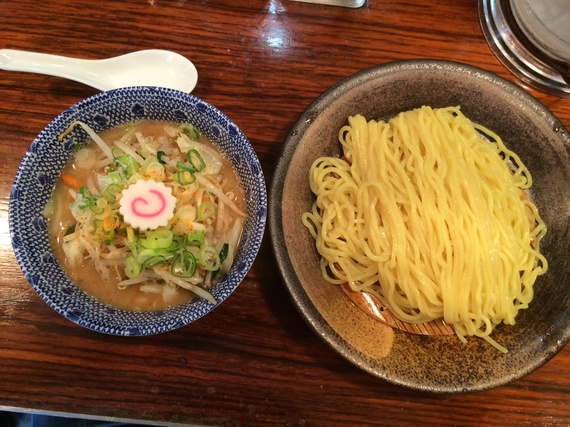 Tsukemen "dipping" ramen blew my mind because I had no idea the noodles could be served outside the soup. And the broth is more like a thick stew, so it sticks to the noodles when you dip them in the broth before eating. The noodles tend to be heartier too-- a big eat, Tsukemen is not a ramen for the weak. 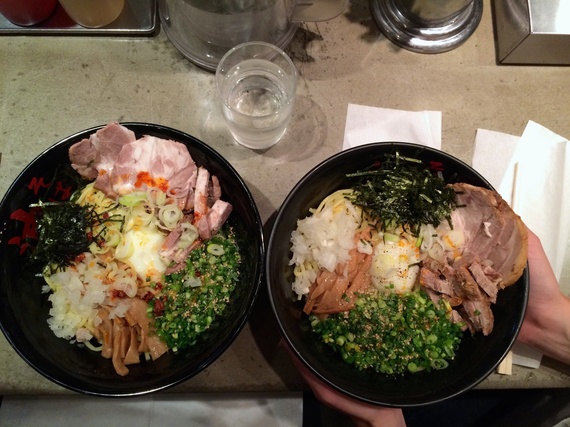 Soupless ramen-- At first I questioned its authenticity because there was no broth, just a spicy sauce on the bottom and a soft-boiled egg for moisture. But a Japanese friend assured me this does indeed count as ramen. Adding some spicy and sesame oils, breaking the egg and mixing with all the sides created a sort of Japanese carbonara. Again, not a ramen for the faint of stomach, but it was unlike anything I've had outside of Japan. 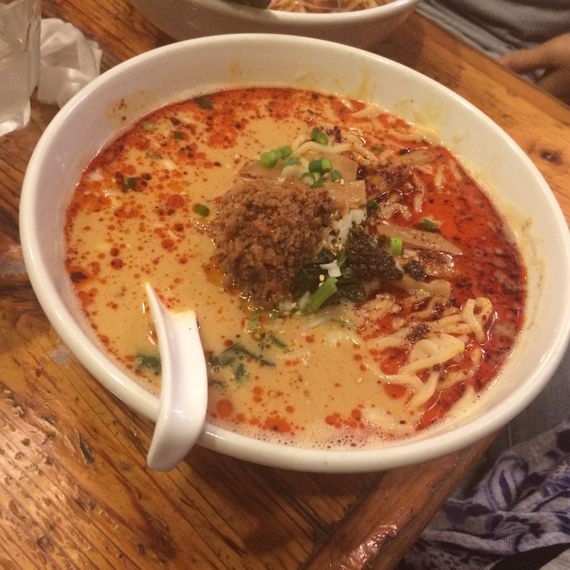 Tantan ramen is a tasty enigma to me. How can a ramen have this much flavor, what is it made of exactly, and why isn't it in every noodle shop in the world? A little Googling told me it's sesame oil and chilies that give this soup its special oomph. I had two tantans during my ramen expedition, and though the flavor profile is far from the "classic" style, it is my new favorite.

It's all about the noodles
The star in most ramen shops is the noodle, not the broth as I previously thought. Some restaurants, such as the chain Ichiran, let you choose between multiple levels of tenderness based on your noodle preference. Others let you pick between different sized portions of noodles (for the same price) so you can get your desired broth-to-noodle ratio. And Tsukemen ramen noodles are served outside the broth at room temperature specifically to maintain the perfect level of chewiness it would lose sitting in the hot soup. 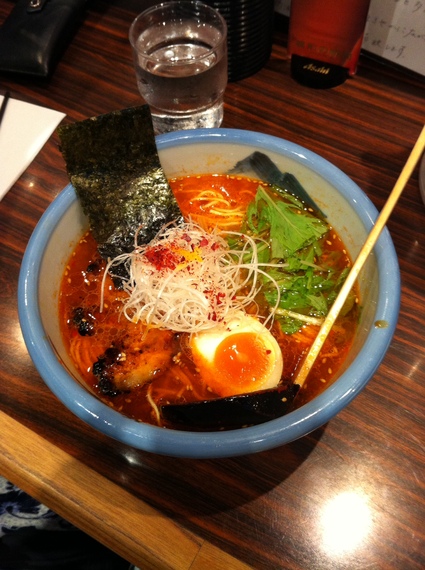 Ramen does not make you feel good about yourself
Japanese people love ramen, but there's a reason they don't eat it every day. The calorie count of a bowl ramen can easily exceed the amount you need for a full day.

Japanese friends expressed concern for my health upon learning how much ramen I was consuming. Ramen is often a late-night food enjoyed after a boozy night out-- the Japanese equivalent of ordering a pizza to your dorm room at 3 a.m. A once-in-a-while treat, it's not an every-day dinner kind of food, so I can see why they were slightly frightened by my endeavor.

I don't recommend eating as much ramen as I did in a short amount of time. I must confess that the one day I had ramen for both lunch AND dinner (never again), I was very uncomfortable. After that I cut back to once every two or three days, but it still became a bit of a (delicious) burden. 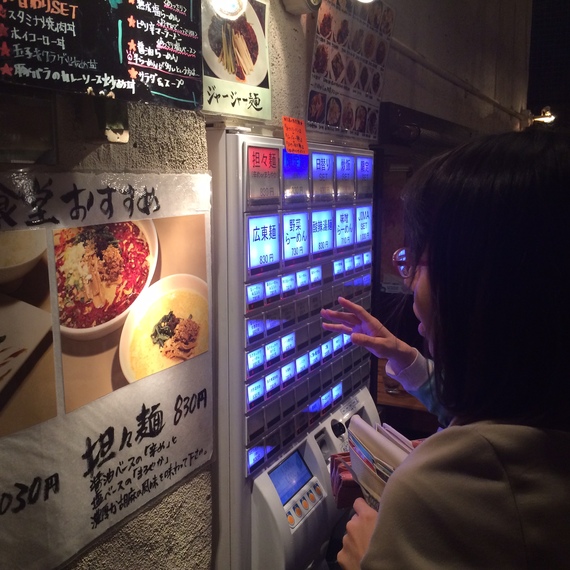 America should embrace vending machine ordering
The most common way to place your order in ramen shops is using a vending machine. To get your fix, just put cash in, press the buttons for the ramen you want plus any sides, and out pops a ticket and change. There is usually a person to assist you with the machine (especially helpful for non-Japanese readers such as myself), and they may also seat you and get your ticket to the chef.

Obviously this process wouldn't work for every type of restaurant, but the efficiency is genius. You pay for the food when you're hungry and really want it. It cuts down on staff. There's no messing up your order because you're the one placing it. And the best part is, when you are done snarfing down, you just get up and leave--no waiting for the check, no flagging down the waiter--you've already paid. 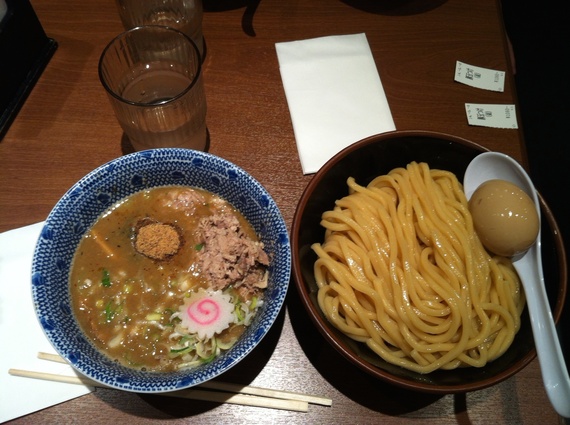 If you're a ramen fan like me, get thyself to Tokyo. Expand your ramen horizons, get ready for some serious flavor, and bring your stretch pants. I feel I've earned my ramen badge in Tokyo, now I just hope I can find my favorites when I get back to New York City.