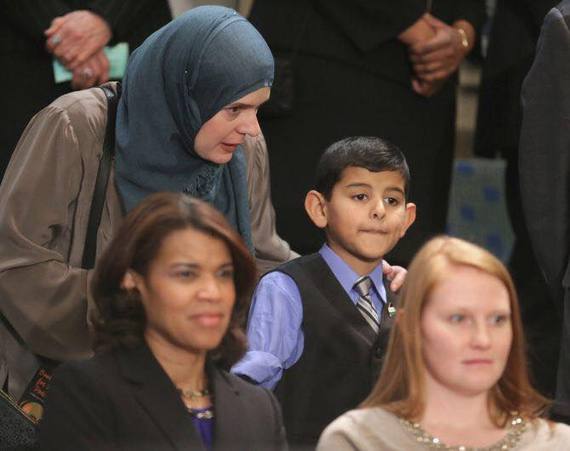 Last night, I attended the President's last State of the Union. To say it had an impact, is an understatement.

The experience was incredibly inspiring and re-affirming of who I am as an American - and where I want to see my nation head. Congress was buzzing with energy and optimism, even as we battle with hateful rhetoric and fear-mongering in the news cycles every day. Perhaps it was because of that rhetoric, that politicians and citizens are starting to want to take back the foundation that the United States was built on: unity, diversity, peace.

We, The People, is how our Constitution starts -- and they were three words President Obama made a point of elaborating on during his inspiring State of the Union speech.

Three words that were being lived out in action as I looked around Congress, and saw all kinds of Americans -- and wannabe Americans -- represented. We had citizens of different religions, colors, sexual and gender orientations represented. Citizens with different levels of disabilities, young and old, and people from differing socio-economic backgrounds and educational and professional accomplishments and then of course the invited refugees, refugees who fled war and terror and now are here, hoping for a new life and a new start.

With all the superficiality and empty promises we tend to feel exude from Washington D.C. in general, the message last night was real and it was tangible.

Not only were the words incredible to hear, but they were said by a President who made sure that his guests and his fellow companions indeed did reflect America's true diversity. Last night, everyone sitting in that room were, yes, The People, and we all felt like a We.

We felt united -- as rare as that is these days. Wherever I turned, people were interacting, laughing, talking, getting to know each other. This is the America I hope will continue days after the State of the Union.

We, The People, United and Indivisible, with Liberty and Justice for All.