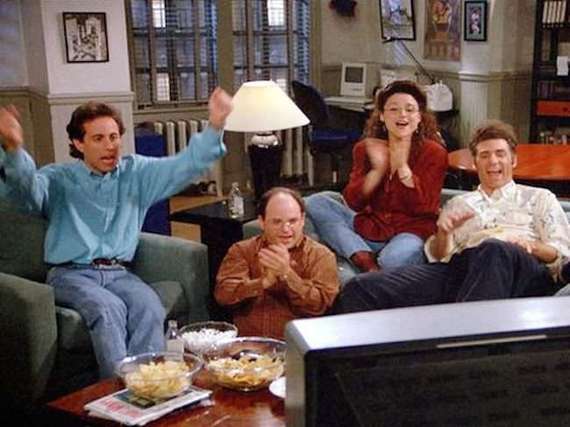 Few things in this life are more subjective than humor. That said, Seinfeld receives near-universal acclaim as one of television's greatest comedies. In fact, a noted 60 Minutes/Vanity Fair poll crowned it the best sitcom ever. And when 60 Minutes and Vanity Fair elect to join forces, you know the world of polling isn't dicking around.

Taking these results at face value, one can't help but wonder: if Seinfeld is TV's funniest sitcom, what in turn is the funniest joke from TV's funniest sitcom? And would this joke then, by sheer elimination, be the funniest line ever uttered in a situation comedy? A case could certainly be argued as such. But oh, the number of gags to sift though.

Some quick arithmetic: the average multi-camera sitcom delivers three laugh lines per minute. Multiply this by 22, the average sitcom episode length in minutes. Then multiply this by 176, the number of 22-minute Seinfeld episodes minus the pair of two-part clip shows we won't count. This gives us 11,616 jokes. You know, give or take.

By default, one of these jokes must be the funniest, be it by razor-thin margin or toppling landslide. But which one? And which characteristics would make it stand head and shoulders above the competitors? With the scientific method as my co-pilot, I was determined to stick the landing on this potential Hindenburg of a head-scratcher.

The experiment: binge-watch all nine seasons of Seinfeld: Elaine-deficient pilot to prison-soaked finale. Whichever line would elicit the hardest, loudest, and lengthiest laugh would be named Seinfeld's funniest joke, and by way of the 60 Minutes/Vanity Fair poll results, the funniest joke in sitcom history.

Unlike their Best Sitcom poll, the Funniest Joke experiment would be performed unilaterally; one man's singular experience. Would such an approach in any way compromise the veracity of these results? Pffft -- Galileo was but one man, yet look at the buttload of things that dude objectively proved. Eppur si muove, amigos.

Anyhow, I set to work on this Sisyphean task. And after an accumulated 66 hours of viewing, I had my answer. Here's the tale of the tape:

The storyline: George becomes agitated when the city's birds break their "we fly away when your car approaches us" deal with humans. While swerving to avoid a stubborn pigeon, he accidentally hits a squirrel. His animal-loving girlfriend Miranda then insists they take the injured rodent to a veterinarian.

The scene: The squirrel is in rough shape, and the vet explains keeping it alive will be a difficult and expensive process.

GEORGE: Well, are there any other options?
VETERINARIAN: We could put him to sleep.
GEORGE: (a beat) What might that cost?

The punchline: Play the video below. Or scroll down to read the transcript if you don't have 20 damn seconds.

VETERINARIAN: Well, it's by the pound, soooo, about 80 cents.

And this, by the standards to which I methodically adhered, is the funniest line in the history of Seinfeld, and -- by extension -- television sitcoms.

Not what you were expecting? I'm in the same boat as you. Especially since I didn't choose this joke to position myself as a roguish ironic hipster: some smug Johnny-contrarian who extols the virtues of rotary phones and insists Radiohead's best album is Pablo Honey. I chose it because I woke the neighbors from laughing so hard.

Which raises the question: out of thousands of funny Seinfeld lines, why did "Well, it's by the pound, soooo, about 80 cents" rise to the top? Tough call. I enjoyed the cognitive disconnect between what one assumes it might cost to put down a squirrel versus what it might actually cost. When frugal George Costanza is strong-armed into paying for something, the price tag usually packs a wallop. So for him to discover this wounded squirrel imbroglio could be solved with nothing more than three quarters and a nickel -- it's an unexpected reversal, and a damn funny one at that.

But this, in and of itself, didn't adequately explain the joke's impact; there had to be more going on. I hoped talking to those involved in its creation and execution could bring some clarity. First up was veteran actor Rick Hall, who delivered the winning line with masterful precision. (A lesser fellow would have hammed it up six ways to Sunday; Hall is not that fellow.)

Although Hall also played the veterinarian character in an earlier episode, he was relegated to a straight man position opposite Michael Richards' frenetic Kramer. When brought in to reprise the role for The Merv Griffin Show, he seemed cognizant of the brilliance awaiting him. "Reading the script," he says, "I turned to my wife and said, 'Laura, I get to say some of the funny things this time!'"

The Merv Griffin Show was written by Girls executive producer and longtime New Yorker cartoonist Bruce Eric Kaplan. As it happens, the episode's 'George vs. animals' storyline was inspired by his own Costanza-like experience. "One time I was pulling up to an ATM, and there were pigeons in the way," Kaplan explains. "And I thought, 'Oh, the pigeons are gonna fly out, as pigeons always do.' And they didn't. And the three people at the ATM looked at me in horror."

He adds, "I think I just pulled away. It was a hit and run."

Despite writing the episode, Kaplan modestly refuses to take credit for the veterinarian clinic scene, citing it was borne of writers' room punch-ups. "I think it was Jerry's idea about adding in the squirrel," he notes. "And my recollection is that Spike [Feresten] wrote that particular joke."

"When I was writing for Seinfeld, it was the first time I had a dog," Feresten says, recounting the joke's inspiration. "And every dog service I used I was charged by the pound. Whenever I had to board it for the holidays, they'd say, 'Your dog is 25 to 35 pounds, so it's gonna cost this.' Even the dog walker would be, 'So how many pounds? What does it weigh?' It struck me as really funny."

Memorable comedy tends to originate from a real place. Which may explain why piling Feresten's personal animal-weighing experience atop Kaplan's personal animal-killing experience doesn't simply double the laughs -- it increases them exponentially. Sure, the math checks out: but do cold, unfeeling numbers fully affirm why this joke wields such indomitable power? Turns out something wholly unexpected may also play a role. Let's call it fate.

"Here's an incredibly weird coincidence," Feresten confesses. "In the past week, my kids and I have domesticated a squirrel in our yard. We've been squirrel crazy." So yes, it appears unlike George Costanza, Feresten has an air-tight deal with the squirrels. And it's one that dates back at least a couple of decades. "When I was a writer on Letterman I had a collection of stuffed squirrels in my office," he adds, tellingly.

Simply put, in appreciation of Feresten's ongoing good deeds (the office shrine, the benevolent backyard adoption), the planet's squirrels have granted him permission to write jokes about them with impunity. "Squirrels are always a good comedy animal: they're just funny looking, they do funny things," he says. "They're half a rat. Plus, you can poke fun at them and not really get called on it. It's like being racist toward Belgians: there won't be any Al Sharptons showing up." Naturally, only Feresten has the ability to make such bold squirrel assertions, resting easy in the knowledge his pact prevents them from diving under his tires in protest.

Additionally, Hall's turn as the squirrel's veterinarian was more than a deft casting decision; this was a role he was destined to inhabit. "Ironically, I grew up on a farm," he explains, "and when I went to college I was going to be a veterinarian until I got swept up in all the theater stuff." Fate strikes again: it's as if the universe harmonically intervened to ensure this joke would see the light of day.

Seinfeld was a show about nothing, but not in the way people tend to assume. Most episodes -- with the exception of early classics like The Chinese Restaurant -- consisted of two to three weighty storylines that dovetailed in the final minutes for an even weightier finish. So yeah brah, there was usually a shit-ton going on.

Accordingly, it seems fitting Seinfeld's funniest line isn't a grandiose "Serenity now!" or "There was shrinkage!" barnburner, but rather a throwaway utterance from a character known only as 'Veterinarian.' In the cavernous Seinfeld canon, this blink-and-you-miss-it line is nothing... which in turn makes it everything.

One could argue that, were 100 people to conduct the same binge-watching experiment presented here, 100 different results would be garnered. As such, we're acutely aware it would take equal parts ignorance and bravado for the Huffington Post to declare '80 cents' the funniest joke in the history of sitcoms.

That said, tough shit, 'cause it totally is and we're totally doing it.

Trump Is So Narcissistic He Really Expected Pence To 'Ride Or Die,' Trevor Noah Says