My husband and I bought a hoarder's house on the storied Main Line of Philadelphia. And after several people suggested I write about it, I finally started a blog yesterday. The following is my first post:

In early June, 2014, John and I stopped in a couple of real estate agencies looking for a fixer-upper on the main line of Philadelphia. Usually, good fixer-uppers in great areas are sold by real estate agents to a builder or contractor on the QT and before anyone else even knows they're up for grabs. Therefore, it wasn't surprising that there weren't any listings for what we were looking for. So we decided not to deal with real estate agents and we started driving around neighborhoods looking ourselves. We wanted a house that looked like it needed TLC. It didn't take long to stumble upon what we were looking for.

We found a brick split-level that looked as though no one was living in it. It had that lonely, kind of forgotten look to it. The grass had not been cut and the overgrown shrubbery at the front of the house was taking over the front door, cloaking the house. The house was literally shrouded in shrubbery. One of the shrubs was a gigantic weed that had taken over to the right of the (underneath) one-car garage. The white front door peeked through long, leafy branches as though to say, help me, I need some grooming, and a quality facelift. Branches were blocking the door; John had to bend and push them back in order to step on the front stoop. 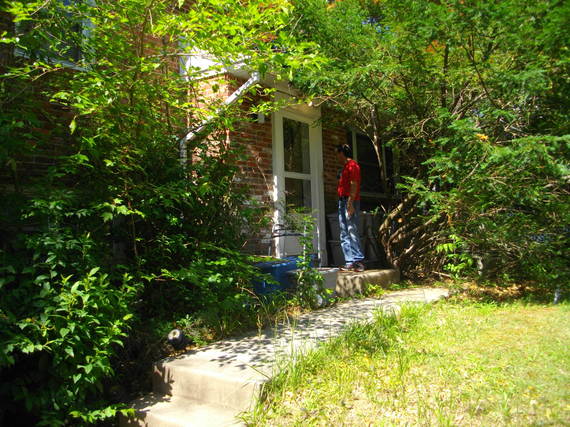 This photo was taken the first day we discovered the house. We pulled in the driveway and John got out of the car to knock on the door. Dangling from the front door was a small, black camera with wiring leading into the house. Were we being filmed? From the front stoop, looking to the right and left, were big Sterilite heavy-duty plastic bins stacked and hidden in secrecy behind the shrubs. 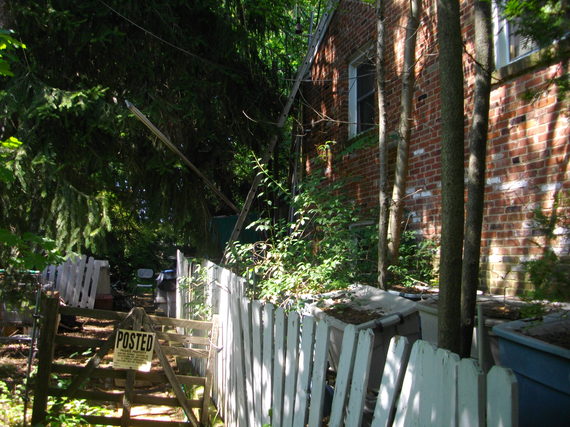 After John knocked a few times and called out, we both walked to the west side of the house. We were confronted with a POSTED sign stating "No Trespassing." Placed on the side of the house were more Sterilite plastic bins, lots of them. In fact, too many to count. They were stacked three high and three rows deep. Water and leaves had collected on the top bins. Looking past the posted gate, the back yard was dark on a bright, sunny day. The trees were so thick and dense, it looked like a jungle. Leaning up against the house was a ladder leading to HAM radio antennas on the roof. We walked to the other side of the house, where we had a better view of the backyard. 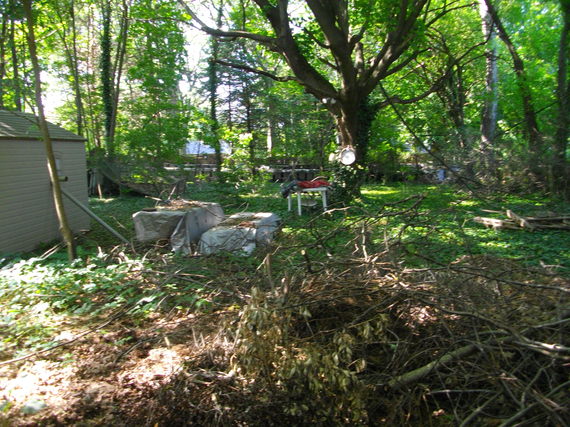 We saw a tool shed in the center of the backyard with what looked like a dryer vent sticking out of the side under a small window. And on a big, pretty oak tree, a large round clock was nailed to the trunk. Thick, black cable wires were also attached to the tree which then continued to the very back of the deep lot. Instead of being on the road, the power lines ran parallel to the back of the property, where the suspended cable wires crossed the yard and connected to a pole. In the distance, and at the back of the property, we could see that there were tons of stacked Sterilite plastic bins with weeds growing up around them. 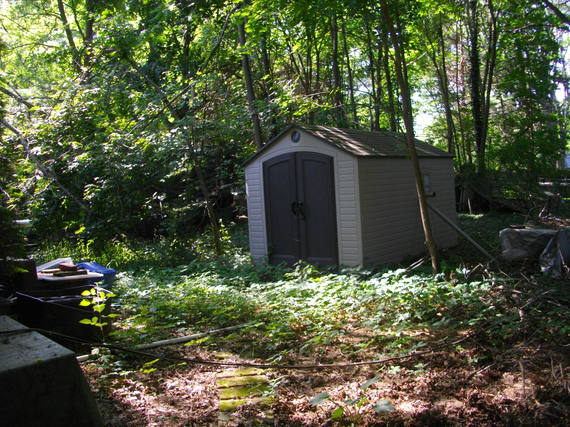 John walked over to the next store neighbor's house and knocked to inquire about who owned Brick House 319, but there wasn't an answer. We left and drove down the road and stopped at another house. After knocking on the door, a woman answered. She said she didn't know anything about the owner and never saw activity at the house. She knew a neighboring house had a pool which was filled in and recently sold, but that was the extent of her knowing anything.

We drove off, thinking that we would return in the next few days, and try knocking on the door of the brick house again.