I have four children, and I have been blessed to breastfeed all of them until at least age two, but I'm also smart enough to realize that unless someone is straight up abusing their child, it isn't my business how they feed or parent their children. You want to breastfeed? Awesome, I'm here for you. You want to bottle-feed? Awesome, I'm still here for you. Either way, I'll tell you to keep an open mind because you may really enjoy breastfeeding, even though you didn't necessarily plan on it, or you might have your heart set on breastfeeding and if it doesn't work out, you shouldn't feel like a failure over it. 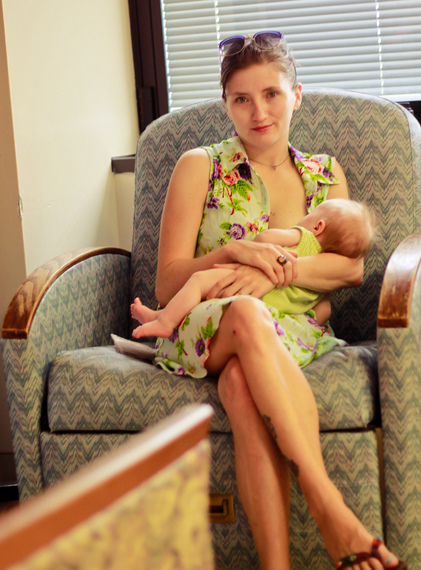 Truth be told, I was about five seconds from giving my eldest child formula. We were having the normal issues - he had a terrible latch, and as a brand new mom I had no idea what I was doing. To complicate things, he was also a premie, and also had a low-birth weight. So there I was at the end of day 5, which was our first day home, crying my eyes out because we couldn't get it. I told my mom to start boiling water for a bottle and that I would call a lactation consultant to come to us in the morning. Suddenly, right as my mom was about to hand me the bottle to feed him, he latched on and nursed like a champ until after he turned two. I honestly still cannot believe that it clicked just like that, but I know that if it hadn't, I would have been heartbroken because even though I was young and it was not the norm in my area, I was determined to breastfeed my son, and I shouldn't have felt like it would have been the end of the world to give him a bottle.

So why do we feel so torn between bottle and breastfeeding? I think a lot of it is where we come from. In my community, we got formula as part of a gift from the hospital and our doctor's office. At one office I went to, they almost forced you to sign up for formula coupons so that their office would get some sort of bonus later down the road. In other communities, they don't have formula at the hospital at all, so those mothers that are not able to breastfeed, even for medical reasons, have to either hope to God that they can pump or provide their own formula, which I think is beyond ridiculous. Why can't there be a happy medium?

Down the road, the mommy wars are only going to get worse, so why can't we just call this one? When our babies are babies, we are already exhausted, sleep deprived, and lucky if we're eating properly, so why do we have to go out of our way to make us feel better about our choices while making other people miserable? This is supposed to be the happiest time of our lives as parents! Before we know it, we will be sending our kids off to school and they will be eating things there that are much worse than formula - I mean, have you seen some of the things the schools are serving up these days? Not to mention that my son has Autism Spectrum Disorder and to get him to eat fruits and veggies, I literally have to blend them up and hide them in foods that he will eat, like sauces and muffins. Otherwise, he would be eating a steady diet of chicken nuggets, hot dogs, and snack bars.

As parents, we have so many bigger things to worry about instead of whether other mommies around us are breast or bottle-feeding! Heck, women I don't even KNOW personally have judged me one-way or the other. So, the next time you see a woman feeding her baby, regardless of whatever she chose for her baby, give her a nod and tell her she's doing an awesome job. I am so grateful that I am able to breastfeed because it has so many benefits, but I've also learned to respect the decisions of other parents and it always makes me happy to see another healthy, happy baby!