"One morning, as Gregor Samsa was waking up from anxious dreams, he discovered that he had been changed into an adorable kitten."

In less capable hands, such a prompt would have resulted in a book that simply replaced the word "insect" with "kitten." But Quirk Books wisely commissioned an extremely capable fantasy writer to re-imagine Franz Kafka's The Metamorphosis as a work of gonzo literature. I'm happy to report that The Meowmorphosis (out this May from Pride and Prejudice and Zombies publisher Quirk Books) is more than the one-note parody its early detractors feared.

While the initial chapters stick close to Kafka's well-known novella, the book spirals out of control (in a good way) when Samsa leaves his parents' home to relieve them of the burden of caring and feeding for such a large, adorable kitten. Samsa's adventure is both hilarious and horrifying to witness, and takes meta-fiction to dizzying new heights. The new co-writer absolutely nails Kafka's voice; the new passages integrate so well with the story that it's hard to believe the book isn't entirely written by one author. 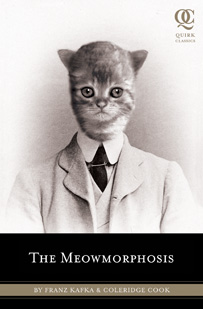 Co-author Coleridge Cook (a pseudonym for an award-winning fantasy novelist) describes Samsa's feline behavior in detail, and not a page goes by in which a piece of furniture is not scratched or perched on. Bowls of milk are lapped at, and humans are snuggled with.

Will cat-lovers enjoy The Meowmorphosis? Yes -- there's no doubt in my mind that cat-lovers will find Samsa just as cute and cuddly as his sister does in the story. I'm a dog person, and even I was LOL-ing by the book's end.