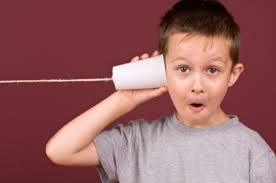 Listening is a powerful skill that is learned. It requires practice, practice, and more practice. There are two things people do if they don't feel they are being heard. They will repeat themselves over and over, and/or they will raise their voice. Many people hold an erroneous belief: If I yell at you, then you will hear me. This, of course, often is not the case. In fact, most people shut down and stop listening when they are being yelled at.

However, it's nice to be able to realize when people don't feel they are not being heard. As I suggested, they will start yelling or repeating themselves. If this happens, it is a clear indication for you to do some active listening. If you find that you are repeating yourself to someone or yelling at them, then you probably don't think they are hearing you either. You could ask them to do some active listening.

So what is active listening?

Active listening is a therapeutic tool that has been around for a very long time. Basically, I tell you what I heard you say. I use your words as closely as possible. I don't interpret your words; I use your words. This helps us speak in the same language, whether it is visual, auditory, or kinesthetic. This can feel like I am just parroting you or mimicking you, but I'm not. I am just repeating your words, and you will feel like I am finally hearing you. When I repeat your words, it doesn't mean I agree with you or disagree with you. It just means that I hear what you are saying. Once you are clear that I hear what you are saying on the surface level, then you can drop to the next level, and then the next level, until eventually you are telling me what you really want to tell me. You couldn't tell me the deeper message until you knew I heard the surface message. Without active listening, you would not feel heard. You would feel you would have to argue with me to prove your point so that I would agree with you. When I am actively listening, you don't have to convince me of anything. I don't have to prove you wrong or make you hear my point; I just listen. I am not making any commitments to you. I am just listening.

As we go through this process of active listening, it is valuable to speak in short phrases rather than long paragraphs. This keeps us current with each other. We will know what we have said to each other. We will know what has been heard. Most people, particularly when they are arguing with each other, speak in paragraph form and go on and on. Their partner responds, reacts, or defends against the last thing spoken. Their rebuttal is also in paragraph form, and they go on and on. Their partner does the same, and a downward spiral of miscommunication and misunderstanding happens, leaving everyone walking away unfulfilled, exhausted, and defeated. Because most of what has been spoken was not responded to, everyone feels unheard, and yes, now they have to repeat themselves and/or yell at each other some more. Ugh! I'd say this type of communication is not very effective. However, if we speak in short phrases and repeat what we have heard using each others' words, we will know that everything has been heard correctly. As a result, repetition and yelling decreases, and we can move toward creating a win-win solution.

This can be a very tedious process, and I wouldn't ask you to do it for more than about 10 or 15 minutes at a time. And of course, you don't have to do this with all of your communication. It is just during those challenging or sensitive times that it is necessary, or when you find you are repeating yourself or raising your voice.

In the communication process, I put the responsibility on both sides of the fence. This means that if I find myself repeating myself or raising my voice, I can ask you what you heard me say. Or if you are repeating yourself or raising your voice, I can drop into the active listening process and tell you what I am hearing you say. The responsibility for clear communication is with everyone involved.

People usually get into trouble or miscommunication when they make assumptions. The definition of assuming is in the spelling. Anytime we assume something, we make an "ass" out of "u" and "me." Making things even more challenging and confusing is that most people assume against themselves. They lose in their fantasies. They have negative self-talk.

If this is true, then how do people get into arguments in which they hurt each other? If you watch and listen, you will see and hear most arguments occur when someone has made an erroneous assumption. Because of their erroneous assumption, their partner reacts in a defensive manner. They feel they need to defend themselves against the assumed attack. They move into a position of "rightness" and attempt to force their partner to see their point of view.

Their partner feels attacked and often insulted and feels they have to attack back. Now both are arguing from their position of "rightness." Hurtful words are said and more defending and attacking occurs. Eventually, one partner will overpower the other and "win" the argument, or both partners will become exhausted and temporarily retreat. After a time of cooling off, they remember that they love each other. They don't like the feeling of separation and soon wonder, "What were we fighting about?" They make up, and all is forgiven. A bandage is placed over the gaping wound, and life goes on -- that is, until down the road another erroneous assumption is made and another fight begins and on and on.

Eventually, the couple withdraws their love from each other, and in time separation occurs.
Is there another way? you ask. Yes, there certainly is. However, it does require change. In couples therapy, the first statement I often make is, "If you like the results you have in your relationship, then keep doing what you are doing. If you want different results, then you will have to do something different. What that difference is we will find out." This is where the concept of "intention vs. method" shows up. As I said earlier, I am not attached to the method; I am, however, focused on the intention of creating a loving, peaceful relationship.

What to do differently? There are so many things that it's hard to begin. Let's look at the situation above and see what could be done differently to create love and peace in that relationship.

One thing a couple can do is what I call a perception check. A perception check is a communication process in which we check our perceptions or our assumptions. Basically, we ask our partner what they meant by their statement or what the intention was behind their statement. This could sound like, "That comment made me feel like a bad child. Were you attempting to make me feel stupid? Were you trying to teach me a lesson? Were you attacking me? Was your intention to hurt me and make me feel wrong or bad? Were you trying to hurt me or punish me?"

For the most part, I have found that people are attempting to get their partner to do "it," whatever that is, the "right" way. The right way of doing "it" is usually their way. They want their partner to be safe in the world and not to get hurt, or to look stupid to others, so they will correct or parent their partner the way they were corrected or parented as a child. Often, the correcting or parenting process is very dysfunctional and ineffective.

By doing a perception check, you often find that the intention of the communication was not to hurt but rather to keep your partner from being hurt or from doing something "wrong," where hurt on some level would occur.

Isn't it strange? We hurt the person we love as a way of keeping them from being hurt.

By doing a perception check, we often discover that we misunderstood our partner; we assumed they were out to get us, and thus we felt we needed to strike back at them. We could also do some active listening as a way of really listening to what is being said. Active listening is another way to avoid assuming what is being said. With clear, active, and accurate communication, most people are able to work together as a unit and stay in a loving, peaceful place.

Working together as a unit is a key to a healthy, long-term relationship. However, this often brings up the issue of control. I frequently hear people say, "He always wants to do it his way" or "She always wants to be in control and do it her way." The truth is that we all want to be in control all of the time. In truth, it isn't an issue of control; it's an issue of direction. In order to understand this further, let's explore the concept of direction.