A lot goes through your mind when your kid is hit by a car. Most of it is best described by those symbols at the top of keyboard, because normal swear words just aren't good enough. But what also went through mine was "I can't keep him safe."

As the mom of a young gay kid I think about safety a lot. I talk about it a lot too. I talk with my husband about where are the safe places to wear his very "out" t-shirts. I talk with the principal and teachers in my son's school about the measures I expect them to take to against anti-gay hate speech at school. I talk to my son about the people of the world who hate him for just being himself. And I do all kinds of things to keep him safe too. I keep him away from old homophobic relatives. I try to keep our family outings in accepting and affirming environments. I reinforce to him in dozens of little ways that we think he's perfect exactly the way he is.

I do all these things because I worry. "Will my kid get bullied at school?" is something most parents worry about, but it takes on a whole new level of intensity when dealing with an asking and telling gay kiddo. There's also the physical threat. Some people, who act like normal, rational human beings at other times, become ape-shit crazy-faced when confronted with an actual gay person.

Is every LGBTQ person a victim of physical threats and violence? No, of course not. Of my friends who are gay and around my age, very few of them have actually gotten into a physical altercation because of their orientation. But it does happen. We've all seen the news. (Or Twitter and Facebook, because who watches local news these days?) In 2014 there were 1,248 official victims of sexual orientation-bias hate crimes in the US. And that's just the official ones. We've all heard stories of incidents we think should be hate crimes, but the perpetrators dodge that prosecution by some legalese or another. I don't want my kid to end up one of those statistics, so I talk, I prepare and I worry.

But none of that matters when someone is carelessly speeding on a quiet side street, talking on their phone and not paying one damn bit of attention to the kid desperately trying to get out of the way. It wasn't personal. The driver wasn't targeting my kid. It was a classic case of wrong place/wrong time. It was an accident. It was reckless driving. It was a lot of things, but it had nothing to do with the fact my kid is gay. 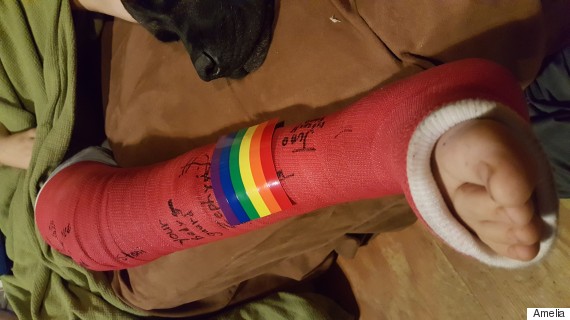 The off duty cop who witnessed the accident and the firefighters who first arrived at the scene didn't know that my kid was gay. They just took care of him. One by one they added to the undercurrent of pissed off that grew as each new arrival was informed that the driver just said "I'm sorry" and drove away. When the ambulance arrived to carry us away to the hospital, they didn't know he was gay either. In fact one of the paramedics tried to distract my son from his worry and pain by telling him about all the pretty female nurses that would be at the hospital when we got there. Even through my son's pain and fear, he managed to make eye contact with me and roll his eyes. I decided I wasn't in any mood for a rational "teaching moment," and let the comment pass. We had bigger things to worry about.

After we were at the hospital, and things had settled down, and we were waiting for tests, one of the nurses brought in a stack of pillow cases for my son chose from. Some local charity project makes pillowcases for our children's hospital to help the patients feel more comfortable. The nurse made a point to tell me that this was the "boy" pile. Again, I let that pass. It works for my kid -- he's a stereotypical boy -- but it wouldn't have worked for all those gender non-conforming LGBTQ kids out there. I flashed for a second on how annoying it would be in an emergency to have to explain that, no, my son would like to see the princess collection, please.

Everyone who responded to the accident was great. They took care of my child, and they cared that he had been so callously hurt, and none of them knew he was gay. But it mattered. It mattered to him, and it mattered to me. When we least expected it, the fact my kid isn't straight was right there with us in an ambulance. Because being gay is something he is 24 hours a day, 7 days a week, 365 days a year. It isn't all he is, but it is an important part of him. And it's a part that should be respected.

And don't worry, he's going to be ok. He has a crazy complicated broken ankle, but that's the only big damage. The cast goes all the way up his thigh and it's awkward and weird, but we're coping.

So, no. I can't keep my kid "safe." I couldn't if he was straight either. Because life isn't safe. No matter what I do, life will keep happening, and we have to adjust. I can't let my worry keep him from being happy, having fun and figuring out dance to "Up Town Funk" on crutches. But I will keep doing my best.