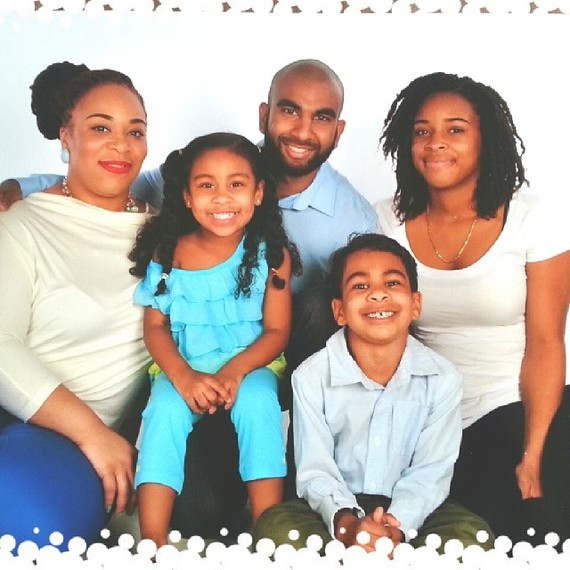 It took a lot of thought as to how I was going to approach the topic of being a blended family. I come from a blended family! I thought of those who may be offended about what I had to say, what my family has gone through with this transition and lastly how the rest of society sees them.

The term "blended family" is referred to a family where there is a divorce or remarriage and either spouse has had children from that previous relationship.

The term also encompasses families like mine that are also interracial. In this case my family fits under both umbrellas. If you read my previous post on being a Teen Mom, then you know I have a 16-year-old from a previous relationship.

A blended family is by no means easy, i'm not looking for sympathy when I say that the work you have to put in is so emotionally draining that some days I found myself wondering if it was worth it. Yes I know as a technicality I "chose" this life so to speak but since life has no study guide I had no idea what to expect. When I met my husband he knew that I had "baggage" he knew that in order for me to like him K.J had to accept him. Not the other way around. Since her biological dad wasn't around as much the relationship blossomed between my husband and K.J a lot easier than I expected. I mean she loved him but when it came to him and I she was still somewhat territorial.

When we got married I was already expecting our first child together, at the time K.J was 8 years old and disciplining her became an issue. We both had different parenting styles, where I was already a parent and he was becoming a parent. So the way in which I dealt with things were completely opposite to the way he did. As K.J got older things became more difficult when disciplining her and her siblings, this I found to be the biggest challenge. Sometimes I felt that there was a separation in the way it was done from a biological and non biological standpoint.

She became more negatively vocal. My worst nightmare was the day where she would say that my husband was not her real dad. When that day came it hit me like a tonne of bricks. It was and still is always important to me to treat all three of the kids the same way, discipline them the same way too so that the topic of him not being her real Dad didn't arise EVER.

Bringing a child into a family where visually she was different to the eye was a hard adjustment, Hubby and I had to make sure to show and tell her that she was just as beautiful and special as her two younger siblings. It was evident that being in a blended home K.J felt like she didn't belong, many knew and voiced out loud that she was "Janella's daughter" she was never and to this day still isn't referred to as my husband's daughter and hearing that from the very same "step family" that she works hard as a child to seek acceptance from played a big part on her relationship with him. That has been hard for me to deal with because she is his daughter whether or not its biological. Her Dad! Not step-dad, not Mommy's husband and not Syree and Shyiah's Dad either. He is her Daddy the man that is in her life consistently from the tender age of 4, the man that always wipes her tears. He is the Dad that bought her first training bra, her first package of sanitary napkins. The only Dad that speaks to her to instil the importance of serving God and having respect for herself.

I have done a lot to make sure my "blended family" doesn't suffer the way I have seen some. Her younger siblings don't know we are a blended family, I don't know that i'll ever tell them. Some may not agree with that decision but guess what...it's my family! I don't feel it's important for them to know.I know it can potentially mess with the dynamic of my family, so why ruin a good thing? So what if we don't share the same last name, there is one Dad, one Mom, and three kids and to me that is what a family is.