In my early 20's, I had the distinct honor of meeting and working with an actress named Viveca Lindfors. Viveca was 72 and Swedish. She'd been in a bunch of films and starred on Broadway, and she'd just recently cast me in a play with John Cameron Mitchell and Judd Hirsch. I got up my courage and asked her to come visit my theater group. We were a bunch of ragtag wannabe's, but she'd accepted my offer and cast me in a play, so I was viewed rather important.

At the beginning of our session, Viveca stood in the center of a circle as we sat on the floor surrounding her. Then she launched into a poem. A poem. This wasn't what I'd planned at all. In fact, it was extremely embarrassing. Viveca dressed in all black, wore false eyelashes, had an accent, and occasionally smoked. I thought she was cool! But now she was performing poetry! And ruining everything! I looked around horrified. Good God, I had misjudged this whole thing. She has white hair. Of course. What was I thinking? She's old. Look at her. I mean poetry?

She's proclaiming some words from that old guy... the one with the white beard... that weirdo who loves the president. 11th grade English class. Mrs. Liscovitch. Something about a Captain...Kill me.

"Has anyone supposed it lucky to be born?..."

You could have heard a pin drop. And time stood still. And throw in a million other cliches because that moment was all of those too.

Her performance left us breathless. It's like just before you receive anesthesia. You think, sucker, I'm not going to sleep. I've got this beat. Look at me... "10, 9, 8 assho... " and then you wake up on the other side. Procedure finished.

We were never the same again.

Here is Jessica's story. From Jessica.

"Things change. And friends leave. Life doesn't stop for anybody."
Stephen Chbosky, The Perks of Being a Wallflower

(I would like to hope that there is more than one quote to sum me up, but this is something that I have learned throughout a period of years.)

I haven't really been thinking about it much, but I have changed DRAMATICALLY in the past three years of my life. I was talking to my 7th grade English teacher, Mr. Trivas, asking how in the entire universe was I going to even attempt to write "my story." Do I even have a story? What the hell is my story? I don't think I'm actually interesting enough to have "a story." Nevertheless, I'm sure everyone has a story and I guess that means I have one too.

From kindergarten to around 6th grade I had a pretty mainstream childhood. I played sports, did fine in school, and had a decent amount of friends. I can't remember a reason to have not been happy, so I guess my parents did a pretty successful job (they did an amazing job). The only blemish or smudge was that my mom and I fought like crazy - well we still do. I think it has something to do with her being extremely overprotective and me never listening to her. It's hard to put our relationship into words - whenever I try it never sounds like I'm explaining it correctly. Oh and the amount of poems I have attempted to convey it in is really astounding but also kind of depressing because I have not yet once succeeded. Like I want to write and read and dye my hair pink, and she wants me to run for class president or be on the debate team. I'm never really going to be what she hoped/predicted while cradling me all bloody with her hair plastered to her forehead because of sweat from childbirth. But that's why she had my sister - someone more predictable and more likely to join the debate team or run for class president.

Anyways, my life from 6th grade and lower was nothing really interesting to write about. I was just like everyone else: loud, obnoxious, didn't brush my teeth, patiently waiting for something to fill my bra cup. Start of middle school was when I began to hit speed bumps. If there is one underlying moral in my middle school story, it's probably that 13-year-old girls are Satin's elves and that I was a stupid twig. So what happened was that I was knotted in this toxic friend group of girls who knew I was weak, pretty much. They figured out how they could torment me because I was (am) sensitive and fragile. I always have been that way. They would exclude me, gossip about me, and blame me for problems that had nothing to do with me. But I still latched onto them and apologized and cried for their forgiveness. Ugh, such a stupid twig.

In middle school, once we had outgrown and shed the "cooties" thing, all anyone wanted was a boyfriend. So I was at this batmitzva party and my "friends" were ignoring me as usual and running away from me. And then this boy who they all were apparently "in love" with, asked me to be his girlfriend (HAHAHHAHA), and I said yes in the heat of the moment; no one had ever shown interest in me before.

So that one simple yes was how I lost all of my friends! The girls spread rumors about me, ignored me, and made sure that anyone else who I had ever been friends with hated me as well. I had zero friends: no one liked me, and people even began to use words like "slut" and "whore." I WAS A 7TH GRADER. And that's how my depression started, I think. I remember that weekend. All I wanted to do was die and I slept for like 2 days straight and didn't eat. I had no one. I remember everything looked gray-er and I began to first think about suicide. A suicidal 7th grader - the memories still bring me to tears. I was so innocent and helpless. And let me remind you this was all because I said yes to a boy wanting to be my boyfriend.

And the problems with my mom got worse because I was acting out and became really reckless/impulsive; its not like I could talk to her about it. She'd say something about how I was ruining our family's reputation and how I was ruining my reputation. It's really interesting how the thought of reputation dissolves when death consumes 50 percent of your thoughts. I had no idea how to channel my emotions so I remember breaking things like pencil boxes and ripping apart books. I couldn't sleep either.

But then, after every storm the sun will eventually break through. I still remember this exact day perfectly. It was 7th grade English class, last track of the day. Mr. Trivas was talking about poetry and "the spoken word" (whatever that meant) and he was showing us videos that I found boring and insignificant. The last video he put on the "smart board" was a spoken word poem called "Perfect" by Maia Mayor. I remember, it felt like I had been hit by a large moving vehicle of some sort. I got goosebumps all over. When it was finished, I started crying as I left the classroom and my teacher asked if I was okay, and for the first time I responded, "no."

I'm crying as I'm writing this (happy tears!) because I really have no idea where I would be right now if he hadn't shown us Maia's poem. After around five months of being alone, misunderstood, and feeling like I was the only one in the entire world who felt like this, there finally was someone who understood me. Human relation felt so foreign. And then something really weird happened. My mood lifted. I slept better. My grades actually increased. I stopped breaking things and shifted onto a pen and paper. It was such a beautiful thing, really. Poetry became my medication, I guess you could say. I'd heard of people "smoking" and "drinking" but I didn't need that to fix me on bad days, because writing/poetry did.

I remember memorizing Maia's poem and would say it, like in the shower and stuff when I was angry. And then I'd feel better. Interesting, right? I'd feel better. A few months later, Get Lit came to our school and Maia read "Perfect," and of course I cried. But I remember thinking how impossible it would be for me to ever do something like that. Mr. Trivas said when I was older I could try out for Get Lit, but that sounded the same as him saying when I'm older I could run for president of the United States or something. Nevertheless, in 8th grade I began reading at the open mics. I would get all jittery on the car ride there and would spend all week trying to memorize poems. And I loved the way it felt to read them, even in front of the 20 or less people that were there. My knees would shake and my hands would shiver and it felt like electricity was swimming through my bloodstream. And I'd feel this rattling in my ears afterwards. I have terrible stage fright, but who cared when it gave me this rush (the rush was actually from the stage fright). I also stopped being so reckless and looking for things to make me feel "alive" because that's what reading poetry felt like. Reading poetry felt like being alive.

At the end of 8th grade I was voted, by my peers, to write the graduation speech. It's so strange because I didn't even associate myself with writing until I was exposed to spoken word poetry. Ninth grade finally came and I tried out to become a Get Lit Player and after a few months, I was. Get Lit is that one thing I look forward to to get me through the week. It's an amazing break from all the people in my community; I get to spend my Saturdays with roughly eight extremely intelligent and gifted writers. They have all become my role models. But I didn't even know any of them at the beginning!

My depression has gotten increasingly better from 7th grade till now, and I feel like I owe a lot of my 'recovery' to Get Lit. I actually have no idea where'd I'd be right now. I could have started using drugs or started drinking or something. Maybe dropped out of school? And Get Lit really turned me away from negative possibilities -- it got me back on the right course.

I now have written my story, and should probably conclude it soon. What I would like to give back to the world is something similar to what Maia did for me. I haven't written a good enough poem yet, but when I do, I really hope that one 7th grade girl loosens her shoulders, sighs, and thinks, she understands me. 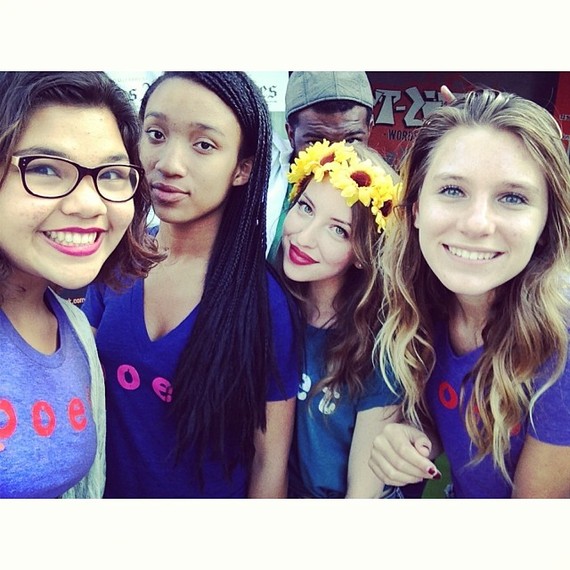 Jessica is a member of the Get Lit Players, an award winning Classic teen poetry troupe, comprised of Los Angeles County teenagers. Get Lit is hosting its 1st annual LA Poetic Convergence at the Skirball Cultural Center on September 13, 2014. Go to www.getlit.org for more information.