Recently, I paid a visit to Constitution High School in inner city Philadelphia, a public school just a stone's throw from the Liberty Bell, and held my latest Socratic exchange with students from the class of teacher extraordinaire Carl Ackerman. As always, our give-and-take was meaningful and memorable, the students' insights uncommonly perceptive.

I started out way back in 2009 holding discourses on the Constitution with Carl's students. Our first Constitution Cafe gathering was held at the Constitution Center, on Constitution Day, five years ago. The students assumed with gusto the role of Framers of a 'new' Constitution. They crafted a constitutional article calling for the creation of a new federal department -- the Department of Youth. Their article asserted that this new cabinet-level position should be headed by a young person, someone under age 18, and that young people themselves (those under 18) should be able to vote directly, yay or nay, for the person the president nominates for this position (hence the need for a constitutional article). 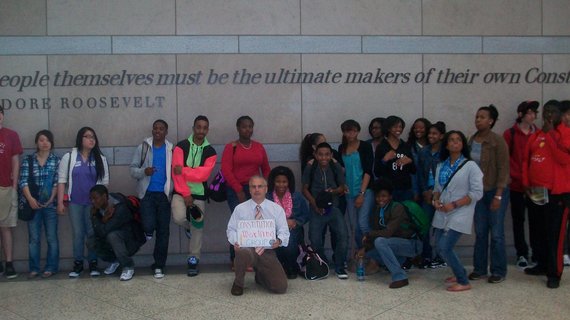 The head of this Department of Youth would be charged with helping create and steer policy on a variety of youth-related matters (many of them now relegated to other, adult-run federal departments), including health and education and civic participation. And why not? Who better to have her finger on the pulse of the needs and wants and hopes of our nation's youth, and to make sure their voices are heeded and heard, than an actual bona fide young person at the helm of this department?

Anyone familiar with my own view -- considered, alas, "radical" (not in a good way) by many adults, including many so-called progressive -- knows that I maintain that our millions of citizens under age 18 should have equal right to self-determination, and be given equal opportunity to achieve that.

No, no, I'm told, our nation's youngest are citizens in the making, not citizens made. They're too ill-informed, too impressionable. No, no, I reply to my fellow adults, many of whom I've found far more ill-informed and impressionable (not in a good way) than their younger citizen counterparts, each and every one of us, at every age and stage, is both a citizen-in-the-making and a citizen made at one and the same time.

Besides that, I've found again and again in my exchanges that our youngest citizens are often most astute when it comes to civic and political matters. Further, they care deeply about the state and straits of our nation, are dismayed by the puerile behavior of our members of Congress, and, if given half a chance, would take the bull by the horns and right things themselves, first and foremost by setting an example of a forward-looking, participatory politics.

Little wonder, then, that when I launched the Declaration Project, I set my sights on paying another visit to Constitution High, to visit with Carl's class of 2015-16. Most of all, I hoped to exhort them to post personal declarations on our MyDeclaration page. The students were enthused from the get-go, and more than rose to the occasion.

Their submissions are among the most stirring that have been posted on our site, and they are imbued with the rabble-rousing Spirit of '76. Their declarations range from an eloquent and moving Declaration of Independence from Silence, a genuine kindred spirit of our original July 4, 1776 document, to a declaration ending police brutality, to one that calls for an end to sexism in all its pernicious forms.

I've challenged the students, now that they've put into clear focus what they believe our nation's most glaring shortcomings to be, to also be a part of the solution -- to put their money where their mouth is, so to speak, and to develop projects that address that issue they've singled out that they maintain that our nation must address of its promise and ideals are to be brought into ever greater alignment with actual practice. It looks like several will take me up on this challenge. Stay tuned.

(Some great groups are admirable calling for a year of mandatory national service, but if young people were ever included in our political processes as equals, no one would have to make this a mandate -- most of them would give their all, and then some, to contribute to civic life, and in a way that would put many adults to shame, including many adults who don't practice themselves what they call on young people to do. And as many calls as there all these days for 'citizen equality,' they never include our younger citizens, not even as a footnote, as I lament here.)

What I'm trying to do with the Declaration Project and our complementary Democracy Cafe initiatives is create the conditions that make it possible to resuscitate the ethos and spirit of '76. If and when this is successful, it'll best and most be evidenced by the fact that it would no longer occur to our youngest citizens (much less our older ones) not to participate, because the participatory spirit would be so ingrained, just as it was in our founding days and for a goodly time thereafter. Sadly, this spirit has long since gone by the wayside; but we're determined to see to it that it has a comeback, and so are the young people taking part in the Declaration Project.

Read their declarations (and all the others posted on our site), immerse yourselves in them, and consider commenting on them. After all, a primary purpose of this site, meant to be the go-to place for all things "declarational," is to foster thoughtful interactive engagement. And engage with our young people as equals, as fellow citizens who richly deserve the same opportunities as all the rest of us to be an equally contributing player in what is supposed to be a supremely open society.

Our young people recognize the hypocrisy inherent in all individuals, groups and institutions that ballyhoo the values of 'we the people,' yet all too often are elitist and hierarchical (with our youngest always looked down on and put on the low end of the proverbial totem pole), and bear the all too evident disposition that they could never learn from our youngest citizens.

Yet, as I'll stress till I'm blue in the face (and if you don't believe me, come join me in a dialogue with kids) I've found repeatedly that not only do the insights of our youngest enhance my own practical and scholarly undertakings at every turn, they often are quite wiser than those of the 'elites' who are so condescending to them in practice.

Check out their wise and passionate words and see for yourselves that they're among our truest heirs to and torchbearers of our wonderfully radical Founders. All I'm really saying, I suppose, is give young people a real chance, a genuine shot at equal participation and self-determination, and they will wow you. When we deliberately leave them out of our democratic experiment, we do so to the detriment of us all. Same goes when we practice the 'do as I say, not as I do' approach, or the noblesse oblige 'here's what you should do, and I'll help you participate in society as long as you participate in the way I think you should' approach.

In a letter to John Adams in 1823 , I note in Constitution Cafe, Thomas Jefferson composed these stirring, rabble-rousing words:

A first attempt to recover the right of self-government may fail, so may a second, a third, etc. But as a younger and more instructed race comes on, the sentiment becomes more and more intuitive, and...some subsequent one of the ever renewed attempts will ultimately succeed. For what inheritance so valuable, can man leave to posterity?

That more instructed generation is upon us here and now, and the only thing keeping childkind from succeeding in making ours a society truly one of 'we the people' is we the adults. Let's get out of their way so they can show us how to make our society all it can be.