He spent over a year trying to convince me to be with him. We were friends for two years and became close. When one of his relationships ended while I was in college, he said he wanted to be with me. He loved me and needed me.

I hadn't had a boyfriend before, so I was eager for my own romance, but was hesitant to say yes since he had a tendency of lashing out. He always apologized for it after. And he said he wanted to be with me so much it hurt. After months of asking, I eventually said "yes."

What followed was the usual honeymoon phase of a new relationship. I was still in college and he was just finishing up high school. We would travel as much as we could to see each other, but for the most part it was a long distance relationship. We would talk on the phone for hours, he gave me thoughtful gifts, and would look at me like I was the most precious thing in the world.

Once he graduated, he followed me to college where we spent every possible second together. Well, physically together. He was glued to his computer the majority of the time. Our days outside of class became a routine of him playing "World of Warcraft" while I played Solitaire on his laptop.

If I made fun of the game, I got yelled at. If I wanted to go out to dinner or do something spontaneous, I wasn't allowed to go. He needed to play and needed me in the room with him since my presence was "comforting." Trying to be a supportive girlfriend, I stayed. 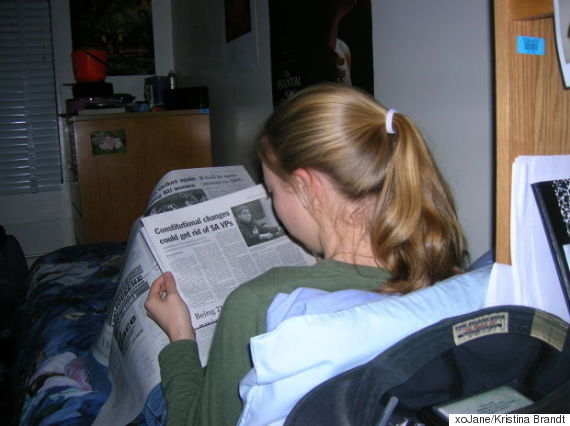 Even my own dorm room became a prison.

I didn't attend campus activities. I didn't talk to my friends. After telling him how I felt about him playing so much, he got drunk, and yelled at me about how I was a terrible girlfriend. I didn't bring it up again.

After I tried again to tell him that I felt like I was being ignored, he spent the night without acknowledging my presence to show me what it was like to be "truly ignored." I never complained about it again.

Instead, I decided to be honest with him online. After writing a very carefully worded e-mail from my room about how he scared me and how I was afraid to be honest with him, I sent the e-mail. Not long after, a mutual friend called me to tell me my boyfriend was going crazy and had taken a "swig" of pain killers. Completely forgetting my resolve to be strong and firm in defense of how I felt, I ran to visit him.

The pill bottle was nearly empty and he was on his bed. He said he thought he was having a heart attack. He said he was upset at himself for hurting me. I went to call for an ambulance, but he suddenly assured me that he was fine. He would get better. I offered to call his mom and he freaked out again, telling me he didn't actually take that many and it would pass. He spoke about how hurt he was that I would write what I did. He said that I hated and didn't trust him.

Trying desperately to calm him down, I began apologizing. I took it all back and said it was my fault for feeling the way I did. Little by little, he began to feel better.

From that point on, any time I stood up to him, disagreed with him, or went off on my own, his hallucinations and threats came. At night, he would start shaking and pass out. When he woke up soon, he wouldn't know who he was. Sometimes he would talk about himself in the third person or say little voices were communicating through him.

Either way, the result was the same: I was a terrible girlfriend. I was accused of not loving him, not trusting him, and even of cheating on him. The only way to calm him down and keep him from pinning me down on the bed was to apologize profusely and say I'd never do whatever upset him again. He'd pass out again and would have no memory of anything that happened the night before.

He didn't know what he was doing. It wasn't on purpose. So I couldn't blame him.

During the day, there were other threats, but never directed at me. He never hit me. Instead he'd bang his head against the tiled floor, punch a wall, or say he didn't deserve to live. I was scared he'd do something drastic, so I did my best to behave. He still loved me and wasn't threatening to hurt me. So it wasn't abuse.

Gradually my friends started noticing something was off, but they never knew how bad it was. With my boyfriend now checking my text messages and hovering over me when I was with my friends, I couldn't really talk to anyone.

Eventually I began to suspect that he was cheating on me, and even hoped he was and I would catch him. By my college graduation, I knew I didn't want to be with him. I was sure he was seeing someone and I wasn't happy anymore. But he loved me and I felt I needed a more tangible reason to leave besides a hunch and unhappiness.

I actually wanted him to hit me. That would cross the line and give me the reason I needed to break up with him. I almost managed to break up with him the night before my graduation when he was spending time until 2 a.m. with another girl. But I didn't want to taint the event and have my family ask why he wasn't there. So we stayed together.

Once I realized I had to break up with him, I needed to figure out how to do it. I couldn't just say I was done. He wouldn't accept that. He'd follow me. He'd hurt himself. Plus there was this little shred of hope that he would become the man I knew he could be.

It was some time before I realized I loved the potential of who he could be, not who he actually was.

With me back home and him still finishing college, we had distance between us again. I saw more of my friends and family and less of him. After months of good and bad days, more terrifying episodes of threats that he never remembered, I finally got up the courage to break up with him over the phone. I was told I was a coward and that I was giving up, but eventually he let me go.

Six months later, we ran into each other. He wanted me back and a chance to treat me the way I deserved to be treated. Unfortunately, I still saw the potential in him to be a good person and agreed to a second chance. That lasted three days. That's all it took before I saw old habits coming back.

When we broke up the second time, he said he'd kill himself. I had until midnight that night to say goodbye. Devastated, I called his mom and spoke with a friend who had been through an abusive relationship before who kept me from going back. It was during these conversations that I first began to realize that this was abuse.

Nothing happened, of course. He lived, still lives, and is no longer a part of my life. But the memory of him leaning over me, pinning me to the bed whenever I upset him, hearing the hurtful things he said, and the fear that he could come after me at any time haunted me. I gradually started opening up to people about what I had been through. They had no idea. They didn't like him, but had never said anything because I seemed happy. They didn't want to be the ones to break us up.

It's been over six years since that relationship ended and I've been able to come to terms with what happened, but still find it difficult to forgive myself. There were so many warnings. So many opportunities to say something. To get out. To get help.

Instead I put myself at risk because I thought that's what couples did. They stayed together when things got rough and they worked through it.

I had to relearn who I was. I had spent the last three years being compliant and quiet. I was afraid to argue, stand up for myself, or even be alone with a guy.

Over time I gradually became a better version of myself. I can't go back to who I was before the relationship. Too much has happened. Instead I became stronger, wiser, and more determined to live the life I wanted. I want to be a voice, not a victim.

I Didn't Know I Was In An Abusive Relationship, Because My Boyfriend Never Hit Me
#YesAllWomen Stories