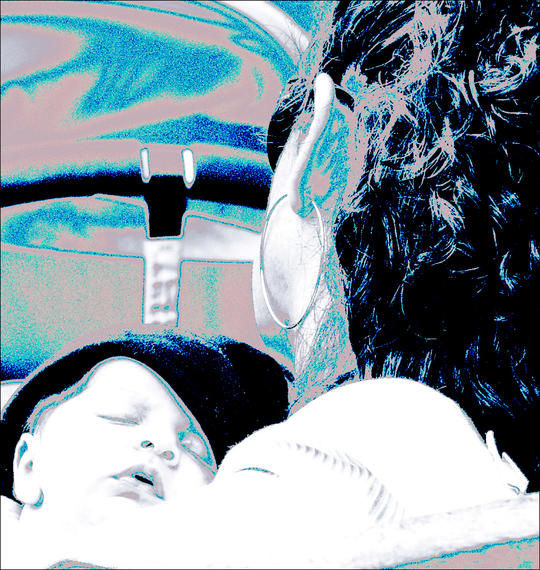 We are a culture that loves to fight, a fact on regular display as we wrangle bird-flipping road-ragers, joust with online trolls, or try reasoning with that weird lady at the park yelling about unleashed dogs. There are political fisticuffs du jour, religious crusades 2.0; racial unrest at fever pitch, and women grappling for fair pay and gender privacy. Given our endless stream of umbrage--some profound, some ridiculous (see America the Petulant: Land of a Thousand Outrages)--you'd think there'd be enough fight fodder to dissuade anyone from manufacturing faux battles to tie us up, but think again.

We've got the always-silly generational wars (Millenials carping about Boomers, Xers debating the Greatest, Zs and Silents doing...whatever). We've got rumblings over something as benign (or is it??) as gluten. We argue about everything from the banal to the critical--bacon, cable TV, GMOs, vaccines--and now we're poised for battle between the Childless-By-Choice and Parent People. To which I say, really? This is a thing? Don't we know these are all market-driven constructs designed to create clicks and engender media? But, still, they do draw blood, and apparently the Childless-By-Choice are feeling particularly vulnerable these days.

The issue was recently brought to high relief by the launch campaign of Los Angeles Times columnist, Meghan Daum's, new book, Selfish, Shallow, and Self-Absorbed: Sixteen Writers on the Decision Not to Have Kids. Like the opening of Pandora's Box, the divide has been acknowledged, and suddenly we're being bombarded with articles, blogs, and terse discussions as men and women alike explain and/or defend their choice not to procreate.

Stefan Beck tackles the topic at The Daily Beast in Childless By Choice: Shallow and Self-Absorbed or Just Awesome?, discussing Daum's book with thoughtful enthusiasm. I was particularly struck by his description of her title as one that enumerated "these common attacks on childless people." Attacks? Has it really come to that? I sense a strain of hyperbole, but maybe it's just me.

Because in all my years as a childless woman (which lasted until my late-thirties), I never met one, not one, person who attacked me for my childlessness. Not one married friend, single friend, friend with children, family member (not even my grandmother), despite the fact that, during those younger years, my closest circle consisted of many young marrieds with kids. I, along with the other childless folks in our crowd gathered frequently in the homes of our various parented friends. We shared meals, holidays, children's birthdays, and pool parties, and never once did the discussion veer toward critique or coercion about child-bearing. Our big decisions were being made as we carried on with lives as varied and vibrant as any group of young adults, and there were no thoughts about whether or not those choices included children. For some it did, some it didn't. It had no more weight than that.

Now as a parent many years later, I have friends within my circle who ultimately chose not to procreate, and, again, it has never been a topic of debate or discomfort. My son's birthday parties were as populated by families with kids as single friends, or married couples with no children. The joys inherent in sharing our lives--at each other's homes and within each other's familial configurations--were unaffected by anyone's particular parental status. Is my experience anomalous? Are most Parent People out there brandishing pitchforks of judgment over the heads of the beleaguered Childless?

I don't think so. Maybe some. But I'd guess most people are too busy managing their own lives to pay much attention to anyone else, childless or not!

Yet as Beck excerpts some of the essays included in Daum's book, it seems clear that childless people, at least those childless people, do feel attacked. They also feel defensive, guilty, convinced, misunderstood ("they don't actually hate children"), certain, indifferent, fearful, at peace, selfish, justified, pained, and really annoyed with a "society" that makes them repeatedly visit those conflicting emotions. One is left to question just who's included in this pugilistic group (Bubbie, Mom and Dad, Aunt Barbara, child-happy friends?), or why any Childless-By-Choice adult gives a hoot anyway. But even Beck shakes a finger at Parent People in his concluding paragraph:

"The best takeaway from these mostly generous and sincere but always thought-provoking essays is this: If you've found joy in children, be happy, but do the childless a favor and don't proselytize. A million missionaries just like you have already knocked on their doors, and odds are you have nothing new to offer. Be grateful that it was an easy, or easier, decision for you to make, and as for the rest of us, just let nature take its course. You never know. Left to our own devices, some of us might change our minds. "

Which leads to a necessary list of the many ways in which this well articulated admonition inspires rebuttal. I can only speak for myself, but I'd guess many, if not most (all), Parent People would echo these items:

Life comes at all of us with legions of decisions to make. We are each constantly in the throes of sorting out who we are, what we want, and where we find our purpose. Bringing a child into the world is one of the most weighty and life-altering decisions a person can make; not having one is as well. But either choice is personal and valid, no one else's to make and not to be judged. By anyone. For any reason. I don't criticize your choice, believe me, so please don't make assumptions that I do.

Besides, we've got too many other important issues that do deserve our attention. Like gluten and whether or not bacon is food.

Babes in Arm photo by LDW.

Follow Lorraine Devon Wilke on Facebook, Twitter, Instagram, and Rock+Paper+Music. Find details and links to her other work at www.lorrainedevonwilke.com and her Author Page at Amazon, watch her book trailer for AFTER THE SUCKER PUNCH here, and be sure to follow her adventures in independent publishing at her book blog, AfterTheSuckerPunch.com. Watch for news about the 4.7.15 launch of her new novel, HYSTERICAL LOVE, currently available for pre-order @ Amazon and Smashwords.