"I'm sorry you didn't get to finish, baby." I could hear the mixture of fear and relief in my mom's voice as I looked across the emergency room at my husband. My mom's sentiments were only the first of many friends and family who gradually found out about my race the next few days.

Until that last mile, it had been a good race. The best race of my life, actually. It was my longest ultra-marathon and I had spent months preparing. I felt confident and excited that morning, standing in the chilly mountain air knowing the day ahead of me would change me at least a little bit. My plan was simple: don't think about running -- just enjoy every step, scene, and feeling along the way. Standing at the base of Mount Rainier when the gun when off is a surreal feeling I will never forget. 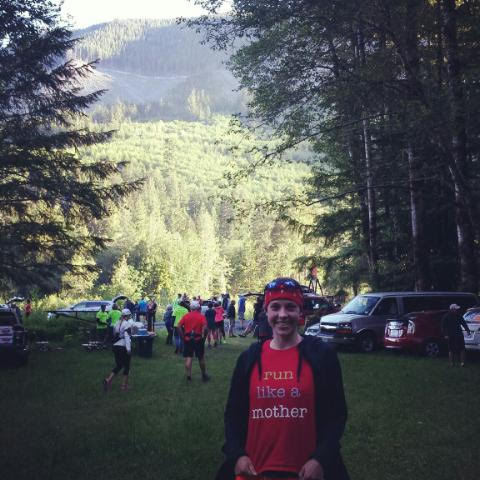 The first 30 miles were smooth sailing. Darting around in my mountain trails, I'd gradually joined a group of three men who were running a similar pace. Over the miles, we all chatted, sharing openly as runners often do, and became a moving herd of support and encouragement for one another. Gradually, members of our group started dropping off after mile 25, and by the time my husband met me at mile 32, I was alone.

But I was still feeling great. I had passed the only girl ahead of me a few miles back and still felt as strong as could be. I was riding the runner's high and thinking the whole thing felt like a dream.

It was a very hot spring day, however, so I was being extremely conscientious about staying hydrated, drinking at ever aid station and taking sips from my waterpack every couple of steps. Soon after my husband joined up to pace me the final 20 miles, the terrain got much harder, turning from dirt or pavement to deep sand and weeds. After eight miles of that, my legs were trashed and exhaustion had woven itself through my bones. I was grateful it had taken that long to set in and focused on ignoring the pain and just moving forward. It never occurred to me that I wouldn't finish.

With four miles to go, I put my hand on my husband's shoulder and told him I was feeling weird and needed to walk. After a mile, I could tell he was becoming more aware of the severity of my 'weird' feeling. I admitted that my arms were numb and I felt disoriented. He switched me sides on the sidewalk so that if I fell, I wouldn't fall into the street, zooming with cars by this time of day, and he insisted on holding my hand - partially to keep me upright and moving forward, and partly to check my body temperature. He later admitted that my ice-cold hands were what made him truly concerned.

Soon, my legs started going numb as well, and I felt weak and shaky. I was at mile 51 and had just one mile to go. It seemed insurmountable to me at that time. I told him I just needed to sit down for a moment and put my head between my legs. Within seconds of sitting down, however, I felt my fingers, wrists, and finally arms uncontrollably curl into themselves, then into my body, and lock. I couldn't move.

Next, my feet pointed and my legs went perfectly straight, locking up. As I felt the same stiffening happen in my back, my fear turned into panic. I told my husband I couldn't control my body, and I started moaning in pain. I desperately wanted to uncurl my muscles to relieve the pain, but I couldn't. My tongue was next to go numb, and as I felt invisible arms start squeezing around my chest I garbled to my husband to call 911. I thought I was having a stroke.

Although he kept a calm voice, I could see his hands shake and eyes grow big as he dialed and asked for an ambulance. He continued speaking with me until the paramedics arrived, assuring me everything would be okay and that he was proud of me and my run that day.

A few hours later in the E.R., my muscles had unfurled after a paramedic was able to calm me down from hyperventilating, which is what he determined was keeping my muscles clamped so stubbornly. After many tests to determine just what was going on, and ruling out dehydration or any heart issues, it was explained that I had built up toxic levels of lactic acid in my muscles from not eating enough carbohydrates throughout the run. My body had needed the sugar from the carbs to help digest the lactic acid. 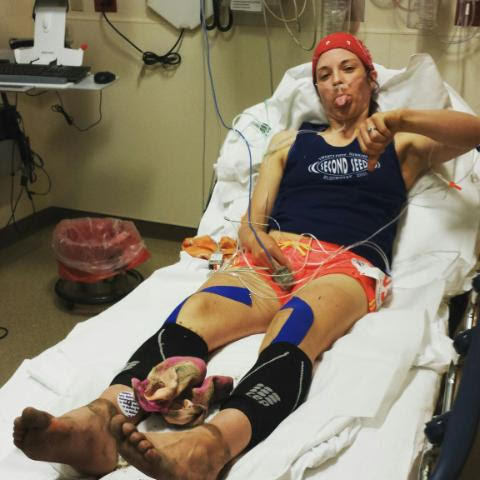 As each medical staff member learned why I was there, they politely extended their condolences that I didn't get to finish the race. With each comment, however, I realized that I truly didn't care. I was extremely happy with my race overall. One little mile wasn't going to cancel out the other 51.

I hadn't decided to do that race just to finish it and be able to say "guess how far I ran? Want to see my cool medal?" I entered it to go on a journey; I wanted to challenge my body, get to know myself better, set an example for my daughters, and explore nature in a very personal way.

I don't need a finisher's medal to feel like I accomplished something that day. I spent all day running through trails (my version of paradise), made quality connections with other runners, and ran 20 miles with the love of my life. What the hell is there to be sorry about? It may have been my first DNF (did not finish), but I can honestly say it is the race I am most proud of. It was a personal journey and a personal achievement.