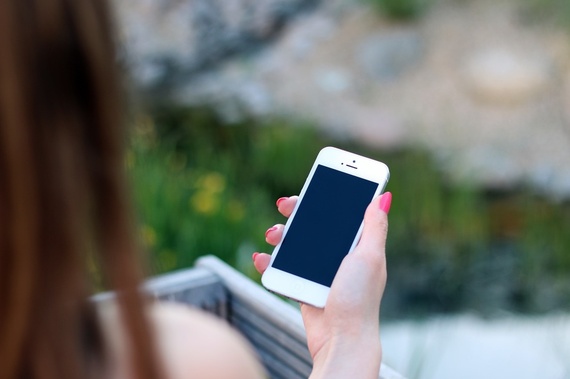 I was in a friend-of-a-friend's chic, Upper-East-Side apartment: The floor and accents had a light Japanese wood theme, her furniture cream colored. The LG slide-phone in my hand was a stark contrast to her canary-yellow, Trump-Tower living room.

"It's so old, it's cute!" she offered apologetically.

This is one way people respond when they first see my phone. An equally positive reaction is the claim of solidarity: "I held out forever on upgrading! I was the last among my friends to get a smartphone." "Hey, I used to have that phone! It was great for texting in the back of class..."

And then there's my least favorite reaction, which is also the most common: revulsion. Exclamations like "What is THAT!?" or "You still use that old thing!?" would be entirely inappropriate in nearly any other situation. Except with close friends, we wouldn't dream of asking, "How old is THAT jacket!?" or "Have you had that teapot for FIVE years!!?"

But, I get it. Technology evolves much faster than most possessions. As a young woman, I am expected to keep up with it.

My "dumb" phone (with tangible keys!) is far from on-trend. Yet, when it comes to my phone, everyone seems to have strong opinions except for me. The truth is: I don't have anything against smartphones or people who own them. No, I don't think I'm better than you. I don't think I'm mysterious or interesting because of my method of communication. In fact, my reasons for having an old phone aren't sexy at all...

I got my current phone in 2011 when I was a junior in college in New York City. Smartphones were just beginning to take off, and I had a big reason not to get one: I was planning to leave the country after graduation and I didn't want to be locked into a contract. Rather than investing in a data plan, I put every penny I earned from babysitting, tutoring, working at retail stores and local newspapers, and serving as a resident assistant into savings. The following year, I graduated, bought a plastic Nokia phone with an international SIM card, and traveled Europe and Asia for fifteen months.

When my parents picked me up at Newark airport in December 2013, they brought my old phone. I turned it on, and was amused that it still worked. I checked my voicemail and texted some friends. Everything went off without a hitch. It wasn't even slow. At that point, I was unemployed, newly broke, and preparing to live in my parent's house for the coming months. Any money I brought in went to gas and train tickets for job interviews. This was going to be my phone for awhile.

When I finally got a job, my income financed a work wardrobe and savings for an apartment. A new phone still wasn't near the top of my to-do list.

Nowadays, I can afford to upgrade. And, the thought of getting a smartphone doesn't bother me, but trading my inexpensive, working phone for an expensive one that's more impressive doesn't sit right. Yes, it would be nice to have a GPS and camera at all times, or to quickly search movie times or restaurant hours in a pinch. But, without those conveniences, I seem to get by just fine. I'm able to stay connected with my friends and easily make my way around. On the rare occasion that I'm absolutely desperate, a smartphone owner never seems to be too far away. And so, I find myself faced with a reality that isn't a dilemma at all: My phone works. It works well. It's easier to carry, is less of a liability, and holds a charge for much longer than its pricier counterparts. It calls and texts. I almost always have my laptop with me to do the rest.

There is one more reaction that I tend to get when folks see my phone for the first time, and it's more subtle than the others. Although I see my phone as merely practical, many take my lack of a smartphone to suggest that I'm making a claim on societal and personal values, that I'm making a statement about the malicious effects of technology by somehow boycotting it.

To clear that up: There is nothing wrong with smartphones. All smartphones don't cause all of us to behave a certain way. If -- when -- I upgrade to a smartphone, I, too, will be prone to its added benefits and extra distractions alike. I'll deal with that then. For now, my life feels full, as is.