I never PLANNED to get an Elf on the Shelf. In fact, the first I ever heard of the damn thing was when a co-worker told me about Jen Mann from People I Want to Punch in the Throat being a hilarious mom blogger who wrote about the Elf on the Shelf. Until then, I was blissfully unaware.

After that point, I jumped into the Elf judgment. The Elf hatred. The oh-my-God-really-Santa-isn't-good-enough-for-you-people judgy judgy bullshit. I swore I'd never get one. I planned a life without an Elf. Even if tiny humans were to become a part of my world, it would be tough cookies for the kids, because their Elf would still be secretly hidden (and never coming out to spy on them). I was completely down with this plan. Until I wasn't.

And I don't even have kids yet.

I had the following Skypeversation with my best friend...

Katie: Then you should get one.

Chrissy: Would you judge me?

Katie: Nah. I don't have a problem with them.

Chrissy: I think it could be kind of fun. I think my boyfriend would have fun with it... and I swear never to use it as a bargaining tool with children...

Unless it's absolutely necessary, of course.

Katie: Dude. My parents used "Santa is watching" on us all the time. Ain't no shame in it.

Don't get me wrong. I still think the Elf is SUPER creepy. But at the time, I just kept thinking of all the fun I could have.

And so last year, I went out and bought one. I took her home and put her on a shelf. I started thinking about the perfect name for her... I wanted someone strong, and maybe a little sassy. So I came up with a little list of possibilities:

Elizabelf Bennet. She won't settle for less than love.

Princess Elfsa. She can build ice castles in her sleep.

Britnelf Spears. She's stronger than yesterday... and she'll probably do it again.

Katniss Elferdeen. She fights hard, and she's not afraid to say no.

Jennifer Lawrelf. She might fall down a lot, but she'll laugh with you about it.

Hillary Clintelf. Because she gets more flak than she deserves. And she's a pretty strong lady.

Meredelf Grey. She's stronger than she thinks, and she can really hold her tequila.

Sold to the tequila-drinking doctor with mommy issues who's also bad with sisters!

When I brought her out for the holidays, she BEGGED me to take her Black Friday shopping at the liquor store. She said tequila was on sale, and she just HAD to get a bottle. While I shopped for wine and whiskey, Meredelf scampered off to another aisle. I found her in the tequila aisle, swooning. 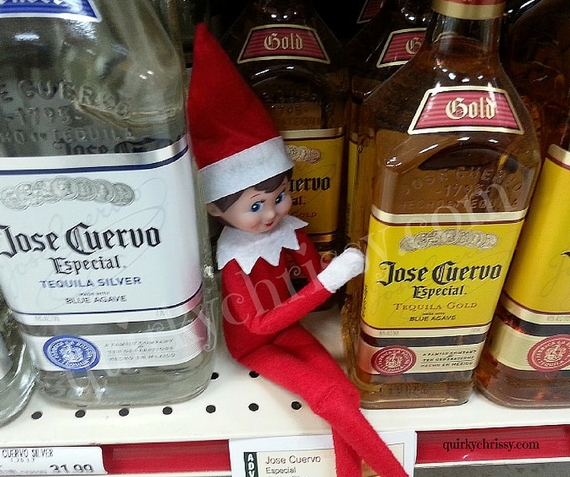 I really had to drag her away from the booze, but we made it home safely and sober. She was practically pleading with me to buy it. Unfortunately, I tapped my budget with other adult beverages, and Meredelf had to suck it up and wait until next time. I think she's going to take it out on me. I've heard she's really good at holding grudges.

I Don't Have Kids, but I Love My Elf on the Shelf
Elf Shaming 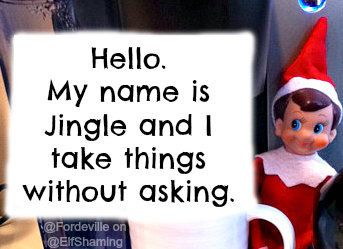