I worked in the post office at the small Bible college I attended. One of my jobs was to hand out I.D. cards to the new students every semester. I suffered from what I self-diagnosed as "crush of the day" syndrome back then so I was titillated to have the opportunity to meet many of my new potential suitors. (This was Bible college after all. Everyone was seen through the lens of potential marriage material.)

It was in that post office that I first met my husband. Upon seeing him, I felt a Nicholas Sparks type of inexplicable emotion. It wasn't love at first sight, but it was "I must see more of him and talk to him and perhaps make him mine."

I made it happen albeit the small school size made it fairly easy to figure out where he'd be and when. We became quick friends, but had a tumultuous relationship that those in their early 20s can identify without explanation.

Months turned to years of an on-again-and-off-again friendship. Mistakes were made. We tried dating and my heart wound up broken. He pursued me once more and I made him jump through hoops to prove that he had changed and really wanted me.

Eventually we found ourselves at a crossroads. Our history, and sexual tension, led us to a decision: We could either get married or part ways forever as it became undeniably clear we could not be "just friends."

We became engaged one month and one day after we started dating for the second time, and seven months later we were man and wife.

Looking back now, it's difficult for me to remember why I married him that day. It was partly a logical decision. As I said, we couldn't remain in the friend zone without one of us getting hurt, but I didn't want to lose him forever, so marriage appeared to be the correct step forward.

There was also an emotional aspect to the decision -- there would have to be in order for me to make such a life-changing commitment. But, still, were someone to ask me that day why I married him, I'm not sure I could have given a reason more than, "Because..."

In May, it will be six years since we stood on his parents' property and vowed to faithfully stay together forever. And it has been throughout those six years that my reasons for marrying him have become more tangible.

I was unemployed for the first seven months of our marriage. In addition to keeping food in our fridge and four walls around us, I also had a couple thousand dollars in credit card debt; debt that he assured me time and time again was now "our" debt because we became one on May 23. Twice a week for several of those first months, he donated his plasma which allowed us to keep our heads above water and to get rid of my debt -- our debt.

He works 7:00 p.m. - 4:00 a.m. during the week, and on the weekends he keeps the baby monitor with him which allows me to sleep uninterrupted -- a feat that is all but impossible when you're the mother of two toddlers. When they wake up in the middle of the night on Saturdays and Sundays, it is him who cuddles with them, plays with them, gets them milk, and puts them back to bed so I can catch up on the much-needed rest I lose during the week.

When I reached my breaking point and called him at work, sobbing and moaning that I couldn't do this motherhood thing anymore, he arranged for his mom to come get the kids for a couple days so I could get a literal sanity-saving break and see a doctor who prescribed me medications which now make it possible for me to cope with the stress of my life.

A few times a week, he tells me how impressed and in awe of my work ethic he is as, after the kids go to bed, I strive to make writing a career. He is consistently and constantly supportive of my making a dream come true and is quick to sacrifice his own downtime in order for me to pursue my goals.

He has become an outstanding husband and a wonderful father to our two children. He is a man of integrity and fortitude, love and respect.

I don't know why I married him in 2009, but as the years we've been together pass by, my reasons for saying "I do" multiply daily. He may say that he is the fortunate one for marrying me, but I know all too well that I, in fact, am the lucky one. 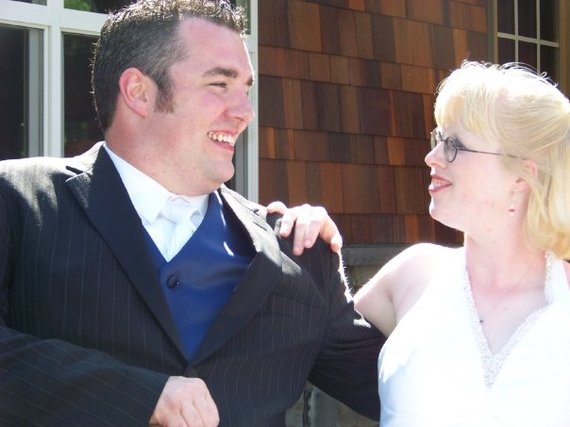 You can find more from Toni Hammer at Is It Bedtime Yet, on Facebook, and on Twitter.

Married Couples: Then And Now
More:
weddingsLove & SexMarriagegetting married
Newsletter Sign Up
A weekly guide to improving all of the relationships in your life
Subscribe to HuffPost’s relationships email
Successfully Subscribed!
Realness delivered to your inbox