I don't sing in the shower anymore.

I have so many people -- friends, family, Owen's teachers, his doctors and his therapists -- who tell me how well I handle everything going on in our lives, how I have such a good sense of humor about things, that I have everything under control. They have no idea about the half-dozen middle-of-the-night emergency room visits I've had recently when the stress of internalizing it all literally bubbles up and takes over my body. I've been there so often, I know one of the head ER doctors and our kids have had play dates. That says something.

I guess I do come off as being somewhat together -- at least on the outside -- to the people who don't know me that well, and to those people who didn't know me before all of this came along... but I used to be different.

I was happy-go-lucky, optimistic, a glass-always-half-full kind of girl. I was fearless. My husband, Scott, used to tell me constantly that I had an invincibility complex (which completely freaked him out -- the original "Captain Caution"). I thought that nothing would happen to me if I went out by myself in the middle of the night to get milk. Why would someone hurt me? Why would you think that would happen? I wasn't naive, I was just a positive person. I understood that there was danger and evil out there in the world, I just didn't think that I would be a likely target. I taught in Harlem for two years in a middle school situated in the bottom three floors of a huge projects complex and had to walk four blocks back and forth to the subway each day. I was one of two caucasian teachers in the school, and the Dominican men that sat on their same stoops each morning and afternoon would yell out to me "Hey, Snowflake!" (their affectionate nickname for me) each time I passed them by. Some people might have been threatened by it, but I thought of it as a token of how we found each other mutually amusing. They were always polite, and I always gave a little half-wave of acknowledgement. To be honest, I kind of assumed that if anyone tried to mess with me, those men would come to my aid.

I was never afraid. I took the subway home from the Bronx by myself after late Yankee games, and I would spend my summer days when school was out and Scott was working exploring all parts of the city. I lived for today and had no fear of tomorrow. The future was something good, exciting, wonderful -- it was farther away from my past.

There were so many things I loved and enjoyed with abandon: a blank page in a new notebook; cracking the spine while beginning a new hardcover; the deep, awed inhale each time I stepped onto Writer's Walk in Central Park; taking my time trying out a new recipe for dinner while listening to music; the smell of the Rare Book Room in the New York Public Library on Fifth Avenue; getting into bed with just-changed sheets that still had that fresh bleach smell to them; dancing around the house by myself when a great song came on; and about a million other things that I can't even think of right now because that life -- that girl -- is so far gone that it breaks my heart.

I turned to Scott the other day and said to him, "I don't sing in the shower anymore."

It was something so simple, but an epiphany of sorts just the same.

Sometimes, the greatest realizations about yourself don't come when you're deep in a therapy session or drunk on your third glass of Cabernet or writing in your journal. Sometimes, they just dawn on you at a random time, just a passing thought that is somehow your, "Ah-ha!" moment; and I think that simple fact sums it up for me.

I used to be the girl that sang in the shower. Loudly. Audaciously. Usually show tunes. In Elementary school, I used to ride around my neighborhood with a friend of mine on our bikes and we would sing together at the top of our lungs as we rode, the wind blowing in our hair. Today, I remember that -- I remember how it felt, like freedom, like the carefree simplicity of childhood -- and I cry, because I don't remember the last time I felt that way.

I don't sing in the car very much anymore either. Now I just try not to scream. Like yesterday, when I was taking Parker home from school and she was having another meltdown for no particular reason, where she was completely out of control -- crying and screaming and kicking my seat as hard as she could. So, I did what her behaviorist told me to do. I pulled over on the highway, put my hazards on and put my headphones in my ears to try to drown her out until she calmed down.

And then I texted Scott to say that I didn't know how much longer I could do this and that I didn't know what I/we did to deserve this and that there was no end in sight to this because no one has any idea what to do with our kids and therefore no solution is forthcoming and there are no books to read about what to do when your4-year-old daughter is acting out because she is angry that her brother has cerebral palsy and that everything in her world has to be effected by his handicap and that she has her own problems to deal with which is why every picture she draws has our whole family with a street drawn down the middle, with herself and sometimes her babysitter on one side and Scott and I on the other side because "you and Daddy are taking Owey to the doctor and I am at school," or "Elsa is holding hands with me and Owey because you and Daddy have to go to a meeting," and how do you ask a preschooler to deal with anger and understand feelings and cope with emotions and comprehend resentment when you are 35 years old and haven't yet learned how to do the same thing? 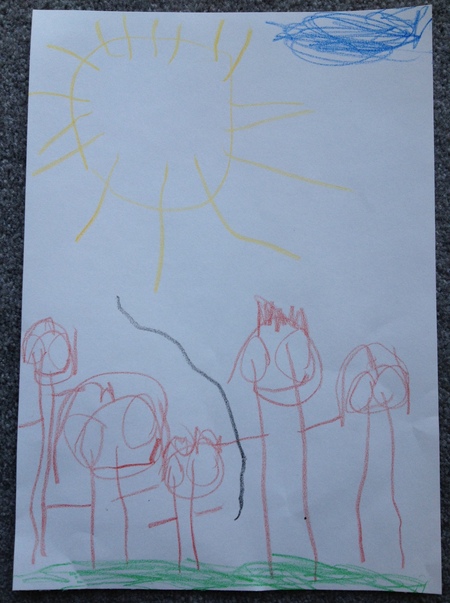 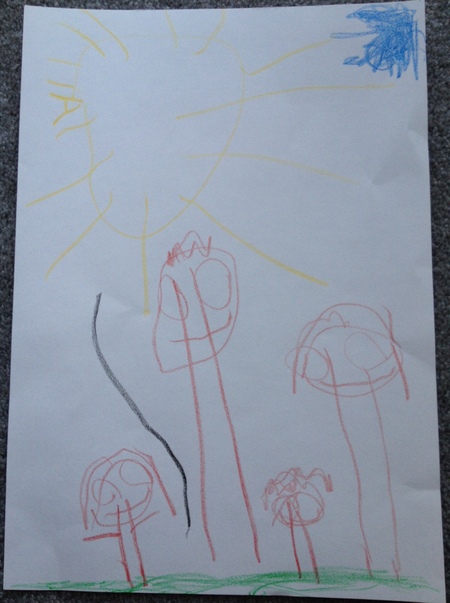 I have no idea how to get that part of me back. I don't even know if that girl is still in there. Even more frightening to me is how to prevent Parker from becoming like I am now; before she has the opportunity to become an optimistic, happy-go-lucky person like I used to be, like she deserves to be. Childhood is supposed to be filled with wonder, with possibilities, with worlds to explore and worlds to invent, with imagination, and promise, and a feeling of invincibility.

All I know is that I want to give those things to her -- to both of them -- but there's something telling me that I need to figure out how to get it back for myself first, and I have no idea how to do that. I want them to see that side of me, to see who I was before everything came crumbling down. Before I became Atlas. When I was the first to arrive at the party and the last to leave. When I was the collector of positive quotes. When I believed that a blank page really meant a new beginning. When I laughed more than I cried. When I trusted people. When I believed that things would work out in the end. When I had passion, and drive, and hope.

When I sang in the shower.

More:
parenting-stressparents-toddlerscerebral palsyParentsNew York City
Newsletter Sign Up
Raise the kind of person you'd like to know
Subscribe to our parenting newsletter.
Successfully Subscribed!
Realness delivered to your inbox