At my triplets' fourth birthday party, our middle triplet got a tummyache. She was standing in the middle of our living room when she got "the look." It was all coming up. As she began to throw up, her preschool teacher flew across the room (seriously, I think she had a superhero cape on) and actually caught my daughter's vomit in her hands.

"Um, did you just catch my daughter's vomit?"

"Yes, what else was I supposed to do?"

That was my first experience with one of my children's teachers going way beyond their job description. It wasn't my last, and I can bet that there will be many more.

A few weeks ago, two of my teenage daughter's teachers picked her up at our house and took her to lunch just so that they could spend time with her. It's their summer break, for crying out loud! They actually chose to spend their time off with a student -- a student who hasn't been in their class in four years. They were simply reminding her how much she is loved.

Dedication above and beyond.

When the triplets were in first grade, our autistic daughter was going to have a substitute for the day and it made me panic. I told the P.E. teacher how worried I was that Justin was going to have a hard day. Around lunchtime, I received a text from her that read, "Just checked on Justin and she is all good!"

This woman was in the middle of her work day, but stopped to make sure my daughter was OK and to send me a word of comfort.

I was in the middle of getting my tires changed at the worst place on Earth and my blood was already boiling. When my phone rang and I saw that it was my daughter's teacher, my heart sank. She calmly explained to me that my autistic daughter was having an epic meltdown in the hallway at school. She said that she had never seen my daughter this way. She went on to tell me that the principal came out of his office, sat down next to Justin and asked her if she needed a hug. This wonderful man sat on the floor with my daughter and hugged her until she was OK.

During another meltdown in the classroom, Justin's teacher got on the floor with her, wrapped her arms around my daughter and sweetly talked her down. The entire time this was going on, she had 20 other students in the room to contain -- but that did not prevent her from comforting my child. She managed to continue to teach and focus on all of the students in her class, and still make sure the singled-out little girl felt safe.

Every year in April I have a Stella & Dot fundraiser to benefit our local autism foundation. These women are the first ones to show up and the last ones to leave. They all bring their checkbooks and do not hesitate to spend their extremely hard-earned dollars to help this cause that is so dear to our family. I think we all know that they are not paid enough, and I can assume that they are on a budget, but that never stops them on this day. I then see the beautiful autism bracelets adorn each of their wrists for the rest of the year.

During Justin's first year in school, her principal, teacher and special education teacher made a trip to our house after school hours. They brought cookies and a book. They wanted Justin to see them as people outside of the school, and wanted Justin to be able to show them her world at home. I mean really, who does that?

I don't know if my family has just been blessed with the best teachers in the entire world, or if all teachers stretch themselves far beyond what is expected.

Every one of my kids' teachers, past and present, is included in our prayers. My children are in love with these angels in their lives.

Myleigh cried all night the day her teacher went into labor because she was so worried about her and her baby.

Myleigh tells us all the time that her teacher can't stop smiling, and how much she loves her because of it.

Stiles' fifth grade teacher still has a framed picture of her in her classroom, and Stiles has the same one framed in her room. Stiles is now in ninth grade.

Bella's teacher honored her at a PTA meeting for being an outstanding student in the community.

I don't think teachers know what they're doing.

I don't think teachers know what they're doing.

My family is in the process of moving to our new home. I took all of the pictures off of the triplets' walls and left them bare. This morning I went in to wake them and found a picture of Justin and her teacher stuck to the wall where the other pictures used to hang. I told her that we were packing and that we had to take stuff off of the walls. She replied, "I know, but that's me and Miss Cooper."

The picture will be the last thing to leave our old home and make its way to our new one. 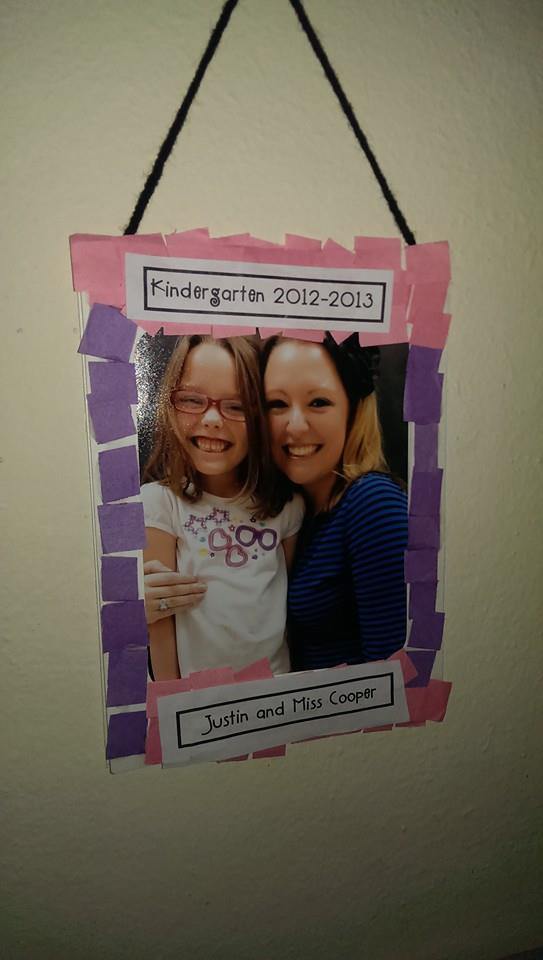 Secrets Your Principal Wants You To Know
More:
all-pampersParentsTeachersvoicesparents-moms

I talk a lot, have a bunch of kids and am married to someone who puts up with it all.