In all the schools in the country, today is the ceremony for the first grade students to enroll in the Pioneer organization. The morning assembly lasts longer than usual, the parents accompany their children while they put on the neckerchiefs and shout, for the first time, the slogan, "Pioneers for communism, we will be like Che." I also went through this on two occasions, once when I was enrolled in the OPJM* and the other on the day when I witnessed my son Teo being initiated. My recollections of the two are so different they seem to have occurred in diametrically opposite dimensions. 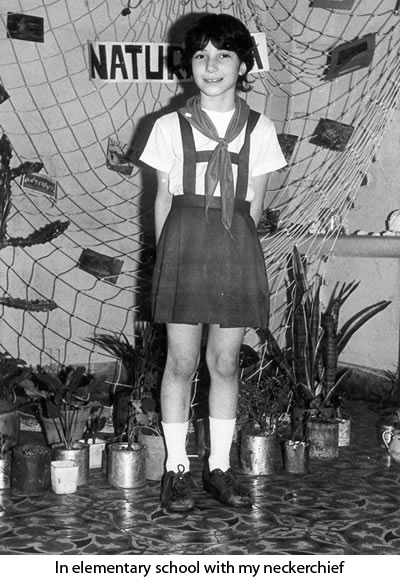 In my case it was the years of ideological fervor and, barely three feet tall, I was determined to give my life for the neckerchief they had just put on me. I felt touched by the hand of the Fatherland even though in reality I was only being added to the ranks of an ideology. The slogan of the organization I had just entered seemed like the magic words that would open all doors to me, though at that time I didn't even know that the suffix "ism" forms nouns that mean "doctrine, sect, system." Much less would I have wanted to be separated like Lybna who, because she was a Jehovah's Witness, did not take "her vows" together with the rest of the children in the classroom. Around her hovered a cloud becoming darker, precisely because the blue cloth was not tied around her neck.

Twenty years passed and I was there with my son one morning in October to see him initiated into the Pioneer movement in which I no longer believed. The teacher walked up and down the ranks and asked the children to repeat the slogan about Che Guevara. Teo remained silent, with a pout that didn't escape the eagle eyes of the principal. When they asked him why he didn't say the slogan like the rest of the students he pointed out, with childish simplicity, "Because Che is dead and I don't want to be dead." I assumed my son was about to be entered into the ideological catalog under the worst of the letters, the "C" for counterrevolutionay. But no, the teacher laughed and gave him his first lesson in opportunism, "Ah Teo, repeat the slogan now, why make problems for yourself."

Jose Marti Cuba Cuba Young Pioneers
This Blogger's Books and Other Items from...