Three months after the birth of her second child, Rachel Kelly found herself sinking into deep depression. Here she describes how her life spiraled out of control -- and how she was saved by her passion for poetry

In the space of just a few days my life had completely unraveled. A trapdoor had opened beneath me. I no longer struggled to get up. I stopped getting dressed.

My worries terrified me. They were no longer the more quotidian fears I had entertained in what now seemed a gentle introduction to the madness. I didn't worry about getting to sleep or being a good wife or journalist or mother. Now I imagined that baby George would die, my son Edward would die. Any attempt to distract me only confirmed my worst fears.

I lay in bed holding on to my mother's hand, squeezing it until my own was white knuckled. If I let it go, I would die, crushed by these blows, whirled into agony, lost to the pain and into oblivion. The bed was falling; I was falling. Every muscle was tense, every sense alert, fiber strained, cell taut as I lay clenched in the fetal position trying to hang on. I had never been in such active, dynamic physical agony.

If they couldn't save me then I wished to die. I was happy to be buried in a hole, to be blind, deaf, to no longer feel or exist, to be put down like a wounded animal, anything to stop the fall into deep terror. I could no longer get out of bed to go to the bathroom but had to be picked up and carried in my fetal curl. Any change of position was out of the question; it was as if I were a victim at a crime scene, my position encircled in chalk. Once in the bathroom I couldn't move back to bed. If I moved, I might fall further. So I lay on the floor gripping the towel rail, refusing to let go. My mother tried to loosen my grip, finger by finger.

Days merged into nights. There was no getting up and no going to bed, no mealtimes, no dawn or dusk. All signposts of daily life had gone. The only respite was to knock myself out with sedatives. My mother would consult the doctor and give me his prescribed dose of tranquillizers, which made me dizzy and nauseous but momentarily lulled the demons. At night I would take both the tranquillizer and a sleeping pill. I devoured the pills, longing for oblivion, crunching them as if for nourishment.

As the weeks wore on, my husband Sebastian was finding looking after me and the children exhausting. So he and my mother decided that, to take some of the pressure off him, baby George would go to stay with Sebastian's family, who were keen to help but were hampered by not living in London. I remember weeping at my bedroom window one morning as he was carried into a waiting car. I felt a continuous ache of missing.

I would think of him last thing at night and first thing on waking. My only compensation was relief that despite being utterly incapable of being a parent, I could still feel as any mother would about her baby.

Very slowly my anxiety continued to subside, but the recovery was bumpy. It was as if I were climbing out of my tunnel up on to a mountain with multiple false peaks. I would get to the top, only to slip back down the other side. On his next visit, Dr. Fischer drew a picture of a jagged line, as if outlining the Himalayas. This was how I would get better. I pinned the picture by my bed.

The mornings were the worst. Later in the day the antidepressants seemed to take hold. Typically I would wake up, momentarily euphoric that perhaps I would feel different today. Perhaps it had all been a dream. Then just as quickly I would despair as I felt the same and it was real. There was no guarantee that I would ever be well. Worry would pile on worry, panic on panic in what was now a familiar pattern. It was still far too frightening to make even the simplest decision, beginning with whether or not to get up. Subsequent decisions required monumental courage: to brush my teeth, say hello, even to go to the bathroom.

Throughout my 20s and early 30s, whenever a friend needed comfort, I would send them a poem that had helped me. Some joked that I ran a sort of poetry pharmacy, prescribing words instead of pills. Now, in sickness, I was the one in need of poetic consolation, and my mother was a rich source.

Some mothers and daughters are bound by a shared love of baking; my mother and I had always been united by poetry. I was a child again, lying in bed as she read to me. It turned out that all these years she had been keeping a book of snippets of poetry, prayer and anecdotes that had particularly struck her, entitled 'consolations'.

I drank up the collection as if it were ice-cool water offered to a parched traveler. I wasn't well enough to listen to, let alone read, anything longer than a few verses. Even that could exhaust me. I didn't have the attention span to read an entire novel. So poetry's brevity was a blessing. So too was the way it dissolved the feeling of solitude: I wasn't alone, others had suffered and made something of their suffering. They had reordered the seemingly random cruelty of the illness into some kind of sense. Poetry absorbed and revitalized me. Its condensed nature and sophisticated vocabulary required a concentration that shocked me into the moment in an almost physical way, freeing me from worries past and future.

My mother and I began with short poems. One favorite was New Every Morning by Susan Coolidge. It particularly helped at the painful start of the day:

Every day is a fresh beginning,
Listen my soul to the glad refrain.
And, spite of old sorrows
And older sinning,
Troubles forecasted and possible pain,
Take heart with the day and begin again.

Another favorite was the lyrics to Oscar Hammerstein's song 'You'll Never Walk Alone', which my mother would repeat as she held my hand. Later, as my concentration improved, I turned to the 17th-century poet George Herbert. When I read the first verse of Love (III), I felt a bolt of electricity pierce through me. All the hairs on my arm stood on end.

Love bade me welcome; yet my soul drew back,
Guilty of dust and sin

The idea that my soul was 'guilty of dust and sin' seemed the most perfect description of depressive illness. The poem pinpointed a sense of guilt that I should be depressed even though I was blessed with a loving home, husband and children, feelings of shame that I had not previously acknowledged. I would also repeat phrases from The Flower, another Herbert poem. One of my favorites was Grief melts away/like snow in May; I wrote it on a Post-it note and stuck it on the bathroom mirror.

In those moments of the day when I held hands with Herbert, the depression couldn't find me. It felt as though the poet was embracing me from across the centuries, wrapping me in a cocoon of stillness and calm. Here was a new welcome voice in my head, preaching the virtues of acceptance and hope rather than struggle and despair.

As the weeks passed and I grew stronger, gardening helped too. I was receptive to the cycle of the seasons, summer's abundance naturally dovetailing with my own recovery. I planted for next summer as well, a statement about the future as much as the present.

Gardening activated that sense of hope and renewal, not just the notion that I would get better, but the belief that my bulbs would come up next spring and my strawberry plants would bear fruit in their own time. There is no rushing gardening, just as I couldn't rush getting better. Gardening even helped with my insomnia. Occasionally the antidepressants were slow to work. When I couldn't sleep, I would walk around the sunlit garden in my head, visualizing the roses in bud and the sweet peas clambering up their bamboo canes.

Sometimes I would garden with George on my hip. It was his hair that caught my eye now, almost a physical pleasure to observe it properly. When he was born it had been thick and black. Now wisps of gold were nudging from the still-soft crown of his head. Light was pushing out dark right in front of me. I was caught out by my tears.

I studied the rest of him. Delicate fingernails sheathed the pink tips of his fingers. He was straining out of the Babygro he had failed to fill only a few weeks before. Sparrow-like cries and little purrs and hums gurgled out of him, all begging for a response from me. Just at the moment when I could once again hear, he had reached the point where he could communicate.

I could hold him properly, too. George's rounded little legs seemed like miniature loaves where his soft flesh folded into itself. He instinctively wrapped them around my side as I balanced him on my hip. He could hold his head up now and my breast was once again useful, this time for something to nestle against. The warmth of his skin made me shiver. The exhilaration was such I felt I might faint. 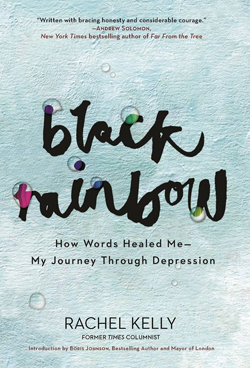 I recovered enough to scoop him back up into my arms, weeping into his hair as I remembered his departure to stay with Sebastian's family a few months earlier. I resolved then that however ill I might be, I would never again be separated from either child. 'It's never going to happen again,' I promised him, looking into his fiercely blue eyes.

But soon I would be back at work as a journalist, in a job I loved. I could not help but reflect on some unpalatable truths. There is no simple, catch-all explanation for this complex illness. I have come to believe depression is partly biological, but only partly. In my opinion, the tendency of many women to succumb to mental illness has been exacerbated by the demands that women put on themselves to fulfill so many different roles as careers, homemakers, breadwinners.

In my case, my character didn't help: I had to accept that on some level my anxious, striving nature and desire to achieve, whether at home or at work, had in part caused the illness. I think that's why mental illness remains so challenging for sufferers and witnesses to accept: we feel it's partly the fault of the individual. We can't simply say we are victims of depression as we can with cancer or diabetes. Depression is different. We believe we bring it on ourselves. We should be better able to control ourselves, but we can't. And we feel a sense of shame and failure because of it and because of the self-absorption that ensues.

This is an edited extract from Black Rainbow by Rachel Kelly, which will be published by Quercus on October 6, 2015. All author proceeds from the book are going to mental health charities SANE and United Response; @rache_Kelly