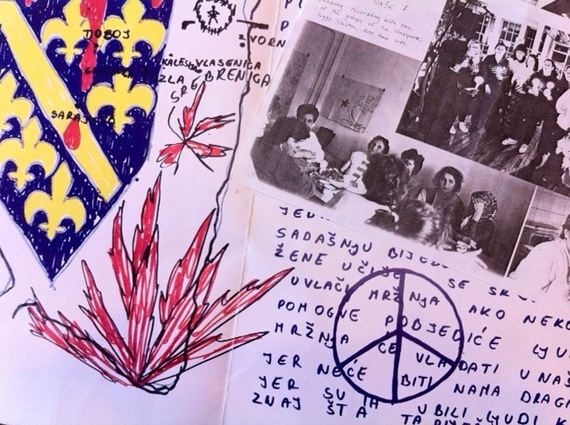 "What do you expect? Armies have always raped and pillaged." What do I expect? I expect this to change, that's what I expect. It is not acceptable that rape and sexual violence are used as weapons of war, and that the prosecution of perpetrators is next to impossible. On Tuesday, June 10, a major step towards that change was made when Special Envoy for the UN High Commissioner of Refugees Angelina Jolie, and British Foreign Secretary William Hague convened the four-day Global Summit to End Sexual Violence in Conflict in London, England. It is being attended by over 120 countries and 1000 experts, NGOs, survivors and organizations.

As a survivor of sexual violence, a therapist who has worked with an inordinate number of females who have experienced sexual violence, and as a friend of the truly amazing Peris Gumz, this gets personal for me. When the country formerly known as Yugoslavia was being torn apart by war in the early 1990's, the lives and bodies of its women and girls were being systematically and intentionally torn apart by rape. Estimates place the number of rape victims between 20,000 and 60,000. My dear friend, Peris Gumz, was not one to sit idly by as war ravaged her ancestral homeland. She started a nonprofit organization called WorldReach (not to be confused with the religious organization) and began using her skills in conflict transformation to work towards healing the physical and emotional trauma experienced by war refugees, both here in the US and in the former Yugoslavia. In my last post I wrote about being ambushed by my own violent thoughts in reaction to the violence of war. My response to the violence in the former Yugoslavia illustrates that with the aid of inspiring friends like Peris, the compassionate hearts of a group of women, and a healthy dose of creativity, anger and outrage can be channeled into a force for good.

We've all heard that the three most common responses to stress are fight, flight or freeze. The research of Dr. Shelley Taylor, Dr. Stephen Porges and others suggests that a fourth response to stress is to "tend and befriend" or "affiliate". Simply put, when under stress some of us will reach out to one another. Women, especially, will do this. Another response to the stress of violence and the emotions of rage or despair is to create: to write, draw, move, paint, make music, films, or theater. The Sestre Nase Project was born from these two impulses: to reach for the hands of our suffering sisters in that war torn country, and to do it through creative action.

I wrote a simple chant that Peris translated into Serbo-Croatian and my sister, Carol, helped set to music:

Sestre, nase sestre (Sisters, our sisters)
Poznamo i tuge vase (We know your sorrow, too)
Nosimo vas u srcu svom (We hold you in our hearts)

We put the word out and a group of women from several towns on the island of Martha's Vineyard, many of them survivors of sexual violence themselves, showed up to participate. During the day we ran the Clothesline Project, and asked people to write and draw messages of solidarity, hope, and healing to the women of the former Yugoslavia on large sheets of newsprint. The next night we met to sing the chant. We sat in circle and passed a special stone painted with a spiral from hand to hand. Peris carried a recording of the chant, the sheets of newsprint, the stone, and photos of us back into her work with refugee women in the former Yugoslavia. As they passed the stone from hand to hand and listened to our song, they shared their stories and tears. "Please tell those people thank you", one woman said to Peris. "We didn't know that anybody knew about us. We didn't know that anybody cared." They, in turn, wrote and drew messages on sheets of newsprint that Peris brought back to us, along with more stories and photos of themselves. A bridge of connection had been created, and Peris continued to use the materials from the Sestre Nase project in her work of conflict transformation and healing in the former Yugoslavia.

When faced with the scale of devastation that war rape leaves in its wake, I sometimes wonder if what we did made a difference. Then I remember the words of one of the women who wrote back to us on that piece of newsprint. "We are women. Our love from the heart is turning to hate. If somebody doesn't help, the hate will win over the love and the hate will always be in our hearts." If there is no healing, then the twisted seeds of hate will pass hand to hand, generation to generation, and love will have no chance. The bridge of connection and healing we created gave love a fighting chance to blossom again in the hearts of all of us who participated.

Healing is vital, but healing without education or justice will not be enough to change the global epidemic of sexual violence and rape in the world today, both in and out of war zones. We need continuing educational efforts to change individual, social and cultural views that condone sexual violence against women and children. Each one of us can commit to changing hearts and minds whenever we encounter the opportunity to teach respect and kindness. There can be swift and strong legal consequences for those perpetrators who use sexual violence and rape as weapons of war. And each one of us can also refuse to accept or tolerate sexual aggression in any of its overt and subtle forms when we witness it occurring. It is my fervent hope that the Global Summit to End Sexual Violence in Conflict will bring us closer those changes. I expect it will. Here are Angelina Jolie's opening remarks: