We met on a January night, when I was out with girlfriends visiting from other cities. Twerking and drinking took its toll and led to empty stomachs, so at 3 a.m. we called ourselves an Uber. The driver was kind and the ride over was so pleasant that we asked him to dine with us. We'd picked up a new friend! Epic nights always begin like this.

His name was Drew.

He sat next to me at the restaurant and eventually my friends huddled into their own conversation, leaving him and me to fend for ourselves. Good and easy conversation kept us afloat freely, with stories of passport stamps to philosophies. He dropped us off at our hotel, and smoothly asked for my number.

The girls giggled. I blushed... and obliged.

The texting... the calls... the crush began. And then, our first date. What started off as brunch, where we both confessed our intentional avoidance of commitment, turned into 10 hours of non-stop fun, intriguing conversation, and the occasional 3rd chakra palpitating gaze. The date ended with an impressive kiss (we made out). I welcomed his tenacity.

Because after leaving a "good" job, moving to a new state and leaving behind people who love me, switching my spacious waterfront apartment for my aunt's back bedroom/office, and getting a part-time holiday job at Nordstrom just to keep gas in my Honda, I'd 'bout maximized my fears and delighted in an opportunity for some revelry.

"My roommates ... were shocked in the morning to learn that my company was White. But they weren't just shocked. They were livid, disgusted even."

February came, as did the yearning. I moved into a beautiful and spacious loft with a couple I'd met some weeks before. Drew was there on moving day, lugging the heaviest furniture as family looked on. He stayed over a few nights later, and at a point late in the evening he confessed that he loved me.

A record screeched and stopped in my head.

What in the hell?! You don't even know me. You can't love me.

I don't have to know you to feel you.

The morning after, I had an early meeting at work and left him to sleep until I returned. He looked so good, asleep in my bed. The morning was cold and bright; the sun was on his cheek. And I watched him lie there, breathing. I smiled to myself, thinking that life was finally turning around -- back in my own place again, with a new handsome gentleman -- and headed off to what could be a new career. I wrote him a poem to read when he woke up, then left.

By my return two hours later, all hell had broken loose.

My roommates, who knew I'd had company that night, were shocked in the morning to learn that my company was White. But they weren't just shocked. They were livid, disgusted even.

We don't want to share a bathroom with White people.

We don't want to be under the same roof with White people.

And, we're shocked that you would be with someone who's White, because... you're conscious.

Conscious. That bastardized word, often representing spiritual awareness, somehow has become synonymous in a sub-culture of the Black community with natural hair and extended conversations about the pineal gland. And exclusion. It was my fault, I suppose... I did wear a shaved head, and do use an Akan name. And the beads... the beads throw everybody off, right?

Thus, while I was indeed really Black, I still wasn't quite Black enough.

I moved out at month's end.

It's true that I grew up as a black girl child in the American South, and had defining experiences with racism. I've been called nigger, been a petting zoo, and been harassed by the police. In part, I went to an HBCU because many of my early experiences with White peoples wasn't so good.

And it's true that, as a dark-skinned girl in the American South, I was a victim of colorism in my own community because my dark was too dark. I was called many names, including Crunchy Black, and Miss Black-Ass America (after I started winning pageants). There were skin shade comparisons. People often volunteered their confusion with my attractiveness versus my skin tone -- they somehow didn't belong together. In part, I left The South because I felt very ostracized. 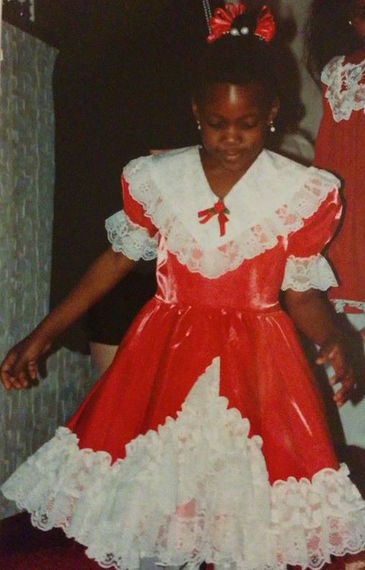 When I moved to Mozambique for the summer in 2008, my life flipped upside down. I returned from Africa a new person, and sampled Black Nationalism and Afrocentricity in an effort to extend the life I'd fallen for. But the ostracization of God's other children to account for centuries of racial injustice still didn't work for me.

The rumor stream began that I was dating a White man. Then the questions came. And so did my answers.

Q: Does he try to act Black? Does he wear gold chains?

Q: Oooo! He took you to dinner? I need to get me a White man!

A: Or perhaps just a good man will do. Because good men also like dinner.

Q: So, why are you with a White man? Are you upset with Black men?

A: Because he's good to me? And he has swag for days. Goodness is not binary, and Black men are still beautiful.

Q: You that type of Black that White men like! They don't want 'em yellow... they want 'em DAAAARRRRKKKK!

A: Oh, really now? Thanks for the expertise.

Q: You see, when White men date Black women, they're feeding an animalistic nature inside of themselves. It's carnal.

Q: If you 'gon date a White man, make sure he has a trust fund.

A: Wait, what? You date men in their 40s without checking accounts.

Q: My husband doesn't like seeing White men with Black women, although he dated an Asian woman for a few years. You two should come over!

A: Because we want to self-subject for experimentation?

Cultural and communal pressures guide standards for dating and mating, especially among American Black women. A 2015 report published by Brookings found that while American marriage rates are lower among black women compared to white women, black women are also the group that is least likely to "marry out" across race lines. Thus, an American Black woman who balks this trend and mates outside of her race will likely be subject to ridicule.

I was struggling with opinions, which I now know to be cultural ignorance disguised as truth, bolstered by popularity. Remember when the Earth was flat?

As I detailed this new struggle with my Love, he offered this: "If loving you gives other people the opportunity to grow, then I welcome it. And I'm excited." 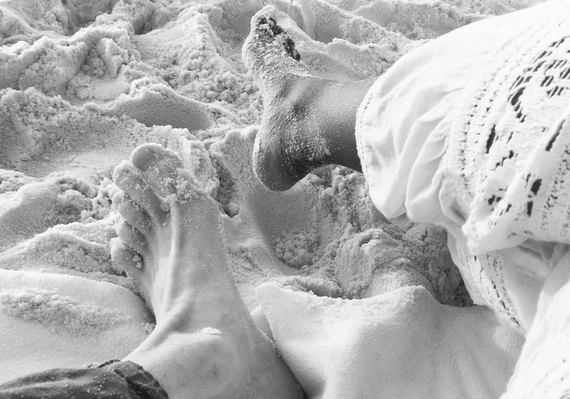 2015 was a violent year in America. My Facebook feed was inundated with daily injustice, and I honestly tried to log off. But then, there was a shooting in a Black church in South Carolina. And my president sang "Amazing Grace." My feed was in a frenzy. One friend posted that she would never again sit with her back to a White man.

"This racial separation is what the enemy wants," I thought to myself. "Why else would the media keep this rolling 24/7?"

That week, Drew and I went to a Braves game, and had to walk through "the hood" at night to get back to my home. I was frightened and my senses were heightened, because I was a woman, who didn't look like the locals, walking through the hood near midnight with my full purse slung across my shoulder. And I was walking with a White man during one of the most racially tense weeks of the year. I felt like a mark.

"He held my hand to secure us, and I let his go to do the same. It broke his heart."

Drew held my hand as we walked through the neighborhood, and he told stories to try and distract me from my panic. He confessed that he was not afraid -- be it his spiritual resolve or because he never had to learn the same fears as me growing up. I took off my precious gold ring and put it in my cheek. Fifty feet from home, we approached a group of locals under a streetlight and my fears got the best of me.

I let go of his hand.

Because what if the sight of us together incited something that we couldn't be saved from? I felt like Mildred Loving. He held my hand to secure us, and I let his go to do the same. It broke his heart. 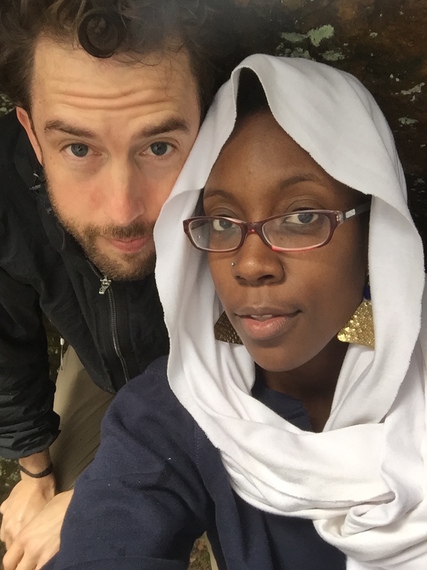 This seems to be a central lesson in our relationship -- how to love in hard places and to not let go when a good love is threatened by fear and anger (real or imagined) from the outside. To overcome the threat as one. And how could I not, when he loves me so damn... professionally?

I have been mis-loved and mistreated in expert quantity. The parting gifts that I earned from mastering "Good-Dick-and-Good-Convo-But-Conditional-Commitment 5201" are outgrown, weathered, and trashed.

I have finally fallen in love (or risen) with a good man, because the support I imagined found me without my asking. Because a love like this is unadulterated -- and not subject to the angers and judgments and fears and ignorance of people nor nations. Because, in case you haven't heard, #LoveWins.

A version of this post originally appeared on You Are The Truth.

Ama is the creative force behind the memoir blog YouAreTheTruth.com, telling all of her business on sex, spirituality, and transformation.