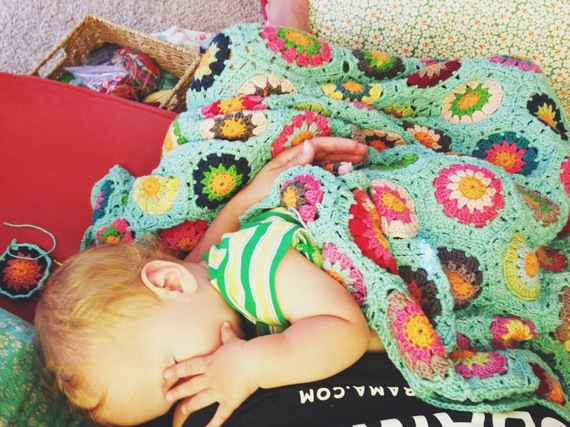 Breastfeeding is magic, until it's not. And when the magic ceases, in my case anyway, it does so quickly, and with great resolution. 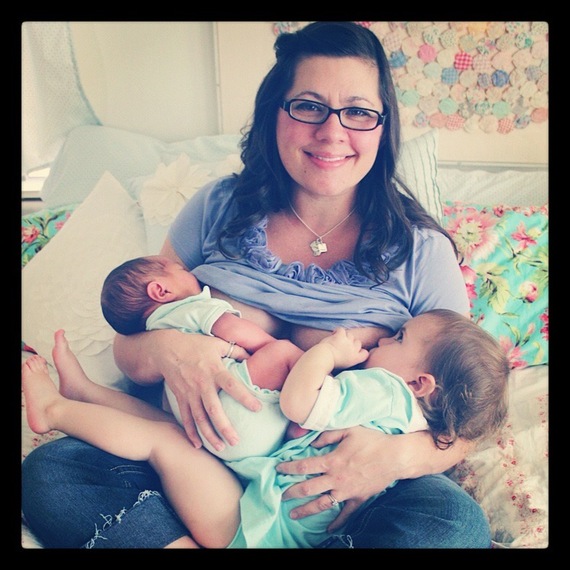 This is a photo taken when it was magic.

It became "not magic" right around the time my youngest child was six-months-old and his sister was two-years-old. To be more accurate, it became not magic when he was born, and I started nursing two babies, but I hung in there, hoping for the return of the bliss, or the exile of the frustration.

I hung in there because I didn't want to wean her. I didn't want to wean her for a lot of reasons, but the primary driving force was guilt. Guilt that I'd allow myself to become pregnant again without considering that my milk would disappear with the pregnancy, and she'd be left to dry-nurse for five months. Guilt that her brother would get what she was robbed of. Guilt that he would get more attention. Guilt that I wouldn't be a good hippie, because good hippies that breastfeed let their children wean themselves -- even if they are 52 months old.

It was sweet at first, the two of them nursing at the same time. The snuggling. The aerial Instagram shots. So picturesque. So Nashville filter. The sheer quintessential mothering of it all.

And then she wouldn't. stop. nursing. She nursed more than him; with more resolve when in pursuit, and more anger when denied. And he was nursing like a baby does. And I was pumping for another baby (which was nice because no one was clawing at my breasts) and my boobs were never in my shirt. And then I hated nursing with the fiery passion of a thousand burning suns.

Before I knew it, our relationship was eroding. I avoided being near her, because I didn't want to be trapped by her pleas, battered by her angry toddler hands. My relationship with her brother was eroding, because I avoided nursing him around her. I developed a visceral reaction to her nursing that was so overwhelming, I wanted to literally throw her off of my body, or just put her in the garage. I felt awful because I wanted to throw her off my body or just put her in the garage. It felt like maybe this was nature's way of saying, "OK, enough. Stop before someone gets locked in the garage."

So we weaned. Well, more accurately, I weaned her.

She didn't wean herself. There was no gradual decline in the frequency of nursing sessions, no mounting interest in outside activities, no moment of clarity in which she realized she didn't need breastmilk. She would NEVER NOT NEED BREASTMILK. Breastmilk was the literal source of life for her.

So I weaned her, and she cried. And I cried.

She felt awful, and I felt awful. There was a lot of feeling awful in this process.

It was not easy (see: awful). There was no formula for success, no steps to follow that would ease the awfulness that was denying my toddler the breast she begged for.

There was a lot of shame to go with the guilt and the feeling awful.

But we did it. We did it to preserve what we had, to stop before it got worse. We did it to preserve my sanity -- which was important. We did it, her dad and I, and the rest of our family, by distracting her and singing and walking and giving her a hundred million sippy cups of whatever she would drink that wasn't breastmilk (except booze, which did briefly cross my mind).

And it was really awful. Until it wasn't. One day, it was just ok. No one was crying anymore. I was nursing Max, and Ella was drinking cow milk and almond milk and water, and no one was hysterical. Life just forged ahead and we did the things you do: 723 loads of laundry (a week), shopping (every few days), sleeping (occasionally). Eventually I sort of forgot the horror of the weaning; my memory lapsed enough that my day-to-day memories of that time weren't comprised of a fog of hysteria.

But the guilt persisted. I felt that I had somehow failed her and my family and my friends and myself. I felt that I should have been able to do it, somehow, despite not wanting to do it. I felt weak. I felt selfish. I felt like I was not a good mother. It took me a long time to afford myself the grace to acknowledge that I just couldn't be everything all the time. It took me a long time to not feel such overwhelming guilt.

I wish I had showed myself that grace then.

I wish I had allowed myself to be seen. I wish I had felt strong enough, or weak enough, or enough enough to say, "I can't do this and I need to know other people who couldn't do this." Instead, I weaned her and I cried. Instead I laid awake, tormented by the guilt of what I saw as failing.

Instead of just acknowledging that I was doing my best and my best was enough.

And so is yours. 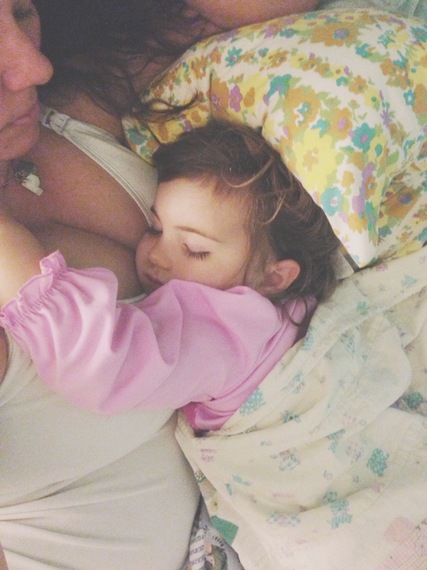 I took this photo with Ella during our last nursing session, I knew that part of our relationship was coming to an end. But this is a good memory.

This article by Joni Edelman first appeared on Ravishly.com, your first stop for feminist hugs.

I Got Naked For The Camera Because Fat Bodies Need To Be Seen
5 Things Teens Won't Tell You About Sex, Drugs, Other Scary Stuff

Voting Made Easy
Register to vote and apply for an absentee ballot today
Register now
More:
ParentsweaningBreastfeedingBabies
Newsletter Sign Up
Raise the kind of person you'd like to know
Subscribe to our parenting newsletter.
Successfully Subscribed!
Realness delivered to your inbox