Performance artist Yingmei Duan is 10 years older than I am. She's Chinese, and chose to become an artist because it's one of the few jobs that would allow her to avoid talking to people. So let's say that I -- who would be compelled to talk to anybody who sits next to me on a train, plane, subway car, bus or bus stop -- have very little in common with Yingmei.

But then again, we don't really know each other. We only met once, four years ago, at the Hayward Gallery. I had just moved from Milan to London. As part of her art performance, she was curled up on a log in a room that had been transformed into a forest. Visitors could access it through a tiny door, similar to the one in Alice in Wonderland.

I was a little frightened by the effect -- halfway between The Ring and Twin Peaks -- that this tiny, hunched over black-haired Chinese woman created. I was muttering under my breath, cursing the friend who had convinced me to crawl through that little door. I was about to turn around and run away when Yingmei suddenly got up and started walking towards me. She didn't say a word. She just handed me a folded piece of paper, with the following message:

"A Korean friend of mine lived a short drive from her parents. For over a year, she kept saying she wanted to go visit them, but never found the time. One week, she even forgot to call. One night, her mother called her and told her that her father had died. Remember to call your parents and tell them you miss them."

Yingmei had no idea that since I left home when I was 18, my mother has always called me between 3 to 5 times a day, religiously. If I didn't pick up twice in a row, she would start dialing emergency numbers; she had a list of my friends and acquaintances, sorted by the city they live in. Yingmei could not have known that despite everything I just said, I've suffered from perpetual pangs of guilt for the past 20 years for living far away from my parents. There was no need to rub it in.

Over the 20 years I've spent living away from home, I've never let a fight with my mother and father last for longer than a day. I always asked myself: "What if I never got another chance to make it right?" I've always tried to organize my vacations around their birthdays. And when I couldn't, I shed tears looking at pictures of parties I missed out on. I've spent a lot of Christmases at home, and plenty of Easters. I've send them video messages to say goodnight. I've sent letters apologizing, and emails asking for help. I've had nightmares that they died. I've received packages full of coffee and love, and I've filled suitcases with gifts and guilty feelings. 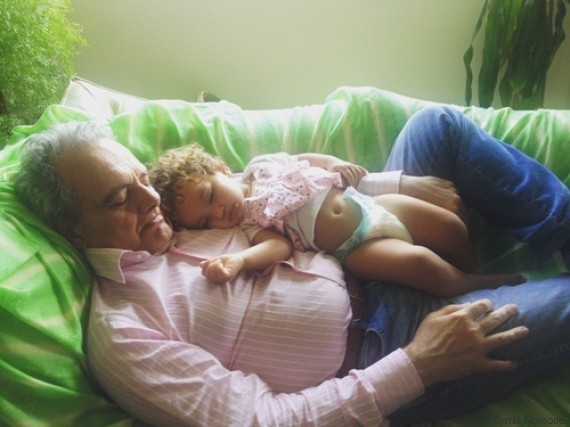 Then my parents became grandparents, and something changed. I was no longer afraid that I wouldn't be there when they passed away, but that they wouldn't be there as my daughter grows up, when she smiles for the first time, says her first word, starts crawling, walking, running, or crashing into trees on her skateboard. I became afraid my daughter wouldn't spend enough time with them.

So I started Facetiming with them. I created a Whatsapp group to send them videos and photographs of important life events and moments, measured in gigabytes.

When I don't send them a video, they say: "You didn't send us a video today, at least send us a photo!"

We call my dad via Skype while he's at work, and we're forced to listen to the calls that come in from his clients (or from my mother). When we get nostalgic, we look at the photographs we have of them on our walls.

We downloaded the Tango messaging app to make video calls when there's no Wi-Fi, but my mom still hasn't learned to look straight into the camera, so we often end up talking to her kitchen lamp. 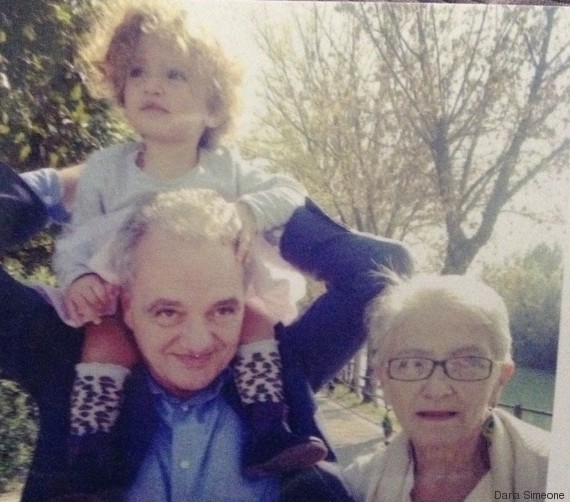 On some days, this is enough for everyone: We even manage to tell each other stories and send kisses and hugs through those tiny screens.

On other days, we are tempted to cross over to reality. We hop on planes, and when we land on the other side, they're always there waiting for us in the arrivals bay, butterflies in their stomachs. Sometimes they bring along a chocolate egg to win her over, but fortunately for them, all it takes is a smile to discover there's no need for chocolate. (Which, obviously, they give her all the same.)

More:
Parentsgrandparents
Newsletter Sign Up
Raise the kind of person you'd like to know
Subscribe to our parenting newsletter.
Successfully Subscribed!
Realness delivered to your inbox

Italian Mom in Barcelona (but often in London)