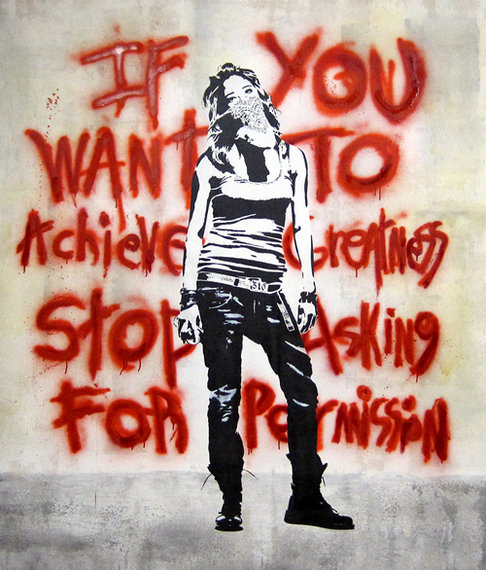 My parents really want me to at least finish school so I can have "security".

I can't quit this job right when they are going into the busy season.

If I leave my job to start a business I might go broke!

This is not an advice post. This is a ME post. These are all the things I say to myself at least one a week.

I was just told that out of the 600 trillion years left in the universe, I won't be here for most of them.

Who will give me permission to do these things before my tiny visit here is over? Before my ticket expires? Before the ride has ended.

As a side note, I give myself permission to have one sentence paragraphs.

I also give myself permission to:

"But you just got here!"

I have to go. I have to sleep.

"But we were counting on it!"

Most people seem to be able to predict the future. They say, "if I do X, then Y will happen."

I've never been able to do that. Mostly it's been, "If I do X then Y will happen" and then Z happens.

Plus when you do things that add to your freedom and improves your relationships with others, well-being is the result.

If you say, "I don't know" on TV then they will never ask you back. I know this for a fact.

They even tell you on a little earpiece, "Jump in now and argue!"

I used to go on TV and then take a five hour shower afterwards and still not be clean.

As long as you behave the opposite of people on TV, then you will be happy in life.

Another question to ask is: "what do you really know anyway?" Most truths today are lies tomorrow.

Better to watch water in a river.

5) NOT CALL SOMEONE BACK

You don't have to. They're going to die someday and so are you.

Once we both die, all is forgiven.

It's not like we're going to meet in hell, being tortured in the seventh circle and he's going to say, "YOU! You didn't call me back!"

If you improve 1% every day in physical, emotional, mental, and spiritual health then that's 3800% a year.

In a weird sort of math that means you're somehow 38 times better in one year.

Even if that doesn't make sense, you get the idea.

Trust that what you know then, will solve what you need now, even if you can't even imagine how that's possible.

Without Trust, you Rust.

7) NOT FAIL AND NOT SUCCEED

People say "fail fast" or "success is the goal" or "fail forward".

There's a sense that failure is good. Or that success is a must.

There's a sense that there's a river, and on one bank is failure and on the other bank is success.

Just go down the middle of the river. You'll get to the end faster than if you bounce off the banks.

Both success and failure are myths.

8) NOT GIVE AN EXPLANATION

If you say no to something, people sometimes want to know why.

Now I try (please let me get better at it) to do this:

If I'm curious, I give myself permission to ask.

If I'm willing to deliver value, I give myself permission to ask.

In fact, I must ask fast. Before the fear wins.

We're the average of the five people we choose to spend our time with.

I can choose whoever I want. If I don't choose, then on my deathbed I will wish I chose.

The average person speaks about 10,000 words a day.

When there's that awkward silence, we all tend to fill it.

But before wisdom comes stillness. Before stillness, comes silence.

I love going on silent retreats. After even a few days you feel that every word you say has more power.

Value is often a function of supply and demand. Reduce the supply of your words and the value of each word goes up.

Sometimes I don't do things because I'm afraid of the effect it will have on others.

I don't want to hurt anyone and often I don't.

But what someone else feels is ultimately none of my business.

And I can't usually perceive my own best interests, let alone someone else's.

An example is: if a child needs boundaries they might feel upset at first about it, but in the long run (maybe - what do I know?) it's for the best.

This reminds me: I want to write a book on parenting. But what do I know about parenting, is the first argument against.

Nothing. Who cares? Who knows anything anyway?

Sometimes I'm invited out. "Hey, would you like to come meet Richard Branson today?"

14) TO NOT ALWAYS TELL A STORY

I can tell you this: if you don't give yourself permission, certainly nobody else will.

The author also wrote about the ultimate cheat sheet for dealing with excuses. Read more from the author... James Altucher, an entrepreneur, investor  and best-selling author of "Choose Yourself" and "Choose Yourself Guide To Wealth". He openly discusses the financial and emotional impact of  making (and  losing) money in his personal blog at JamesAltucher.com.