"What the fuck is cancer? And why does everybody have it?"

I'll never forget how those exasperated words landed on me only an hour after sharing the news with my friend and colleague, Whitney, that I had been diagnosed with breast cancer. I was 38 years old. I found the lump on a Sunday morning and just in time for lunch the following Wednesday I had a diagnosis. It was April 13, 2011.

Leading up to that Sunday morning, I ate well, exercised and for the most part had what most of us think of as the ideal, healthy body-nourishing regiment. With all of that, I suppose I should have been surprised the first time I felt the lump. But somehow, I wasn't. I was surprised in the, "Oh wow,we've got a situation here" type of way, but not at all in a "why me?" kind of way. I was much more interested in why this was happening in a global sense and why I had allowed myself to be uneducated about cancer in a world where it runs so rampant. I think that's why Whitney's words hit me like a flamethrower. "What the fuck is cancer? And why does everybody have it?" They were really the only two questions I had about the big picture and I was totally perplexed as to why there was no answer. I wasn't angry. I was just blindsided and curious.

It didn't take long for me to realize that I didn't know what the fuck cancer was because it was just too much. It was too big. It wasn't something I could wrap my head around, so I simply didn't see it. I beat myself up about that for a moment and then I thought, "Okay, how am I able to see this? What do I need? What would be helpful for me, for other cancer fighters and for all of the people in our lives who have the desire, but no idea how to help? What's missing?"

Sitting there with Whitney, the room felt as if it was getting smaller as her words expanded. That's when I knew that her statement wasn't just the most profound question that had ever been directed at me, it was the title of a movie. As a screenwriter, novelist and veteran film crew chick, I knew that someday I would move into directing. I'd always wanted to do it, but I was also very aware of the fact that I wasn't ready. In that moment I was. I was going to make a movie. It was going to help people. And it was going to answer the question, "What the fuck is cancer and why does everybody have it?"

It's hard to know what Whitney was thinking when I blurted out my idea. She was probably still in shock by the news of my diagnosis, but with strong conviction she simply said, "yes" and that was it.

I had no money and I was staring down the barrel of 11 months worth of surgeries and treatment for a stage 3a breast cancer diagnosis. I have no idea what I was thinking, but I asked anyone who would listen to help. They did, and they called their friends, who called more friends. Hollywood showed up and we shot, and we shot and we shot. We met people with all different kinds of cancer experiences from all different walks of life and we talked to them with a camera rolling. 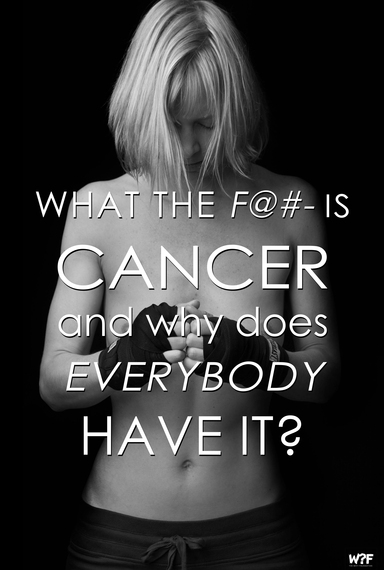 We asked a lot of questions and got a lot of answers, but we never answered the question that inspired the whole thing. Nothing was totally definitive, but everything we heard was raw, honest and refreshing. An overwhelming amount of people shared their experiences and knowledge unapologetically and uncensored, which offered more help and insight than I ever could have imagined. How do I eat during chemo? What is radiation? What happens to your penis after prostate cancer? What is lymphedema and how do I manage it? What can I do to help someone fighting cancer? What do we know? What don't we know? What the fuck is going on right here, right now?

We learned so much that the movie expanded into the creation of a website, then the Why? Foundation. It will continue on into a web series so that none of the valuable insight that was shared for the feature film hits the cutting room floor.

What I learned is that for me, cancer isn't something that we know as much as it is something that we do. It's a constantly evolving entity with more questions presenting themselves and more solutions being revealed each day. It's something we all need to work on in our own way. I hope my movie "What the F@#- Is Cancer And Why Does Everybody Have It?" helps. I hope it inspires people to take cancer education into their own hands through a vehicle that works for them. I long for the person who has no reason to see this movie. And most of all, I dream of the conversations it might inspire so that anyone who feels the urge to run away from cancer will run straight at it with a vengeance.

Once that diagnosis hit, I moved. I moved in the only way I knew how. I wrote. I studied. I made a movie. I took cancer on and I kicked its ass. I wanted to be as aware as I could be. That was my way. I say that because everyone has their own way. The thing about cancer is, there are no rules. You get to fight cancer any way that you like. I did it with a camera. You do it in whatever way you're inspired to. The most important thing is that we do it.

Watch the trailer to "What the F@#- Is Cancer And Why Does Everybody Have It?" and find out how you can get involved.