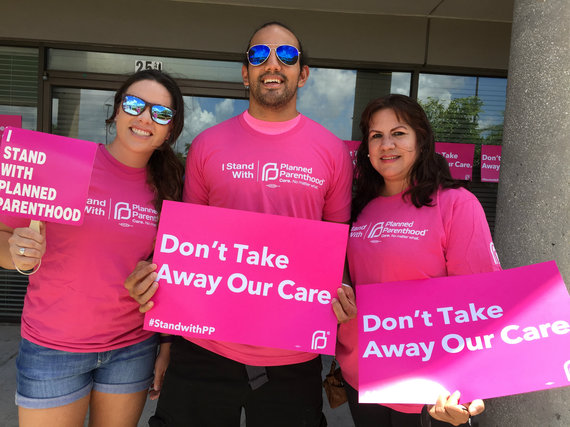 The author and her family members at a rally in support of Planned Parenthood this year.

One night at a club in Cancun my friends and I weaseled our way into a VIP section (a normal occurrence for us). I noticed a girl who was not one of my friends standing on the step in our tiny, privileged section. She was clearly in the way and not supposed to be there. I put two hands on her back and pushed. Down she went and my friends erupted in laughter.

I was that girl. You know, the one who was always the drunkest, always wanting to continue the party into the wee hours of the morning. The one who got in fights and (probably) the one hitting on your boyfriend. I was accustomed to using people to get what I wanted. I changed friends like I changed underwear. I engaged in immoral and sexual behaviors that were not in line with my values. Worst of all, I would criticize others for doing the same.

Not only that, I was a bitch. I had an unrelenting attitude of "f*ck you" and "I don't care." I thought the world was out to get me during active addiction and, therefore, I didn't feel like I owed anyone an ounce of kindness. I believed that the rules didn't apply to me. I took pride in being mean, people being scared of me and always getting the last word in every situation. I was known amongst my friends as the loud, opinionated, outspoken one. And I loved every second if it.

This was the chaos I lived in when I drank. It felt good to be bad, but then it felt horrible. Each morning after drinking, I wasn't only hungover physically -- I was hungover emotionally. The truth is, being mean all the time was hard work.

I prided myself on being open-minded in the political realm, but never put those beliefs into practice in my everyday life. Politics, women's rights, and human rights have always been passions of mine. One of my two college degrees is in Government and Political Affairs. I chose that route after John Kerry lost the presidential election in 2004, giving George W. Bush his second term in office. I was the first one to come to the defense of any minority group who was being unfairly persecuted. Yet I couldn't show myself, or the people in my life, the same love and respect.

Of course all of these points never occurred to me until I made the decision to get sober. After dropping my alcohol and drug habits, I had to take an honest look at myself and my behavioral patterns of the past decade. I was horrified when I realized how mean and bitchy I had been. I felt sick. How could I have treated people like that? During that time I honestly thought I was a badass who could do no wrong. Realizing I had just been a cruel bitch who had given up her morals during her addiction, rattled me to the core. Cue the overwhelming guilt and shame. While talking about this topic with my mom she reassured me, "You never lost your morals, Kelly. You still stood up for what was right."

I wondered who I would become if my controversial identity had to go out the window with my drinking. Could I still be liberal and opinionated? Could I still stand up against political and social injustices? Would I lose my identity completely?

The work I've done on myself in recovery has helped put things into perspective. Just because I'm sober, aware of my actions and making a conscious effort to be a better person every day, does not mean I can't be strong-willed and outspoken. Like so much in recovery, finding my new identity was all about striking a healthy balance. Today I have choices, which I never had in my addiction.

In March I decided to quit my day job after feeling like a manager was treating me unfairly for several months. All I wanted to do was explain myself to the big boss and lay out the evidence, but I never got the chance to tell my side of the story. For a few days I was fuming. Why couldn't they see my side? Another lesson learned in sobriety. Even though my first reaction was to have the last word, it wouldn't matter what I said, my boss' mind was made up. Telling him my manager was an asshole wouldn't make anyone sound like an asshole but me. I realized I am no longer that person.

Today, I don't need the last word, and I don't have to be the mean, judgmental person I once was. They say hurt people hurt people, and little by little, my hurt is healing. I will always be the girl who speaks up when getting catcalled on the street, the one who calls out the person saying something racist and who gives honest advice when asked. But today I'm not mad at the world. I don't feel like the world is out to get me and I need to leave a destructive trail everywhere I go. I don't wish the worst upon people. I have learned compassion, empathy and tact.

I make better decisions sober because I've finally gained self-respect. I don't prey on others in order to lift myself up. I don't have to reply to every nasty Facebook comment, even when it grinds my gears (even though sometimes I want to). I can speak my mind without calling someone names. I've found that I am more peaceful and happy this way.

I'm definitely not perfect, but I'm learning. I'm learning to forgive myself for not being a decent person in the past because I was sick and suffering. Knowing this, I am able to be empathetic when someone reacts in a mean way with me. I understand now that how a person reacts is almost always a reflection of how they're feeling -- it's not about me.

I still write controversial articles and say controversial things, but now I do so with tolerance and respect. Even the way I got sober is considered controversial to some people, and that's okay. I got sober, but I didn't stop being controversial. I didn't lose my identity at all. In fact, the most wonderful gift of sobriety is that I am finally becoming who I was always meant to be.