When I was 24, I told my boyfriend that he had better get me pregnant soon because my eggs were going to shrivel up and die. For some reason, we didn’t last.

When I was 31, I posted a Craigslist ad looking for a guy who fit a very specific description and who someday wanted a family. I was weirdly lucky to find a fellow who was almost a perfect match (along with 300-some other gentlemen who sent assorted photos of interesting body parts).

Alex is eight years younger than me, and I knew our age difference was going put on hold my dreams of becoming a mother. But my choice of being a comedic, dirty, folk-rock musician certainly didn’t help speed things along, either.

Alex sweetly hung around, turning a blind eye to my many shenanigans, late nights performing, drinking, and general inability to behave normally in any way. Somehow, we made it through all the trials. When I was 36, I married Alex on unicornback in Cape May, New Jersey.

It would be another two years before we agreed that the financial aspect of parenthood seemed like something we could handle.

We began having baby-making sex that was on the clock, all the time. It had a purpose, and our hard work paid off. I found out I was pregnant in early April, at age 38.

Sadly, however, the doctor told me at my 10-week visit that there was no heartbeat. She suspected the worst, that there would be no baby. She was right. I miscarried shortly thereafter. The physical and emotional pain was nearly unbearable.

All the things I’d read and heard played in my mind. Had I waited too long? Should I have harvested my eggs back in my early 30s? Should I start looking into adoption? Would I never get to become a mother?

I didn’t have much time to worry. Shortly after the miscarriage, I found a sketchy lump in my breast that was tested several times and finally deemed most likely benign, but I needed a lumpectomy to be sure. Alex and I spent the summer camping, literally running away from our worst fears ― that I could have breast cancer and we might never get to have a family.

I had the surgery in September. The lump was, in fact, benign. It was something called a radial scar, and it because of it, my chances of developing breast cancer were increased by about 15 percent. But the surgeon said I could still become a mom and even breastfeed.

I became pregnant a month later, at age 39. It wasn’t lost on me that the pregnancy was a true gift.

I attended all my recommended appointments and testing. Doctors stressed that this was of extreme importance since I was a mother of “advanced maternal age.” One doctor had the gall to call me a “geriatric mother.” I wanted to punch him in his kidney. I think he could tell, because he followed up with, “I know it sounds strange, but that’s what they call it.”

To have a baby is to relinquish so much of who you are or were. In some ways, it is to die and become reborn yourself.

I am Rh-negative, so I had to get a couple of shots to prevent my blood from attacking my growing baby. Other than that, the pregnancy was a breeze. I didn’t get morning sickness. I didn’t feel bad or ill or sad or weird. I barely even felt pregnant, except for the fact that my stomach began getting bigger.

I only gained about 25 pounds, and I hiked, worked, spent time with friends, performed, had lots and lots of pregnancy sex, went camping, ate a lot of good and bad food and had a ton of fun ― possibly because I knew that once the baby came, it might be a while before I could have fun again.

My husband and I watched many movies together, talked and dreamed and were very loving. I was pretty wicked roasted on the influx of serotonin; I was happy and literally glowing. My hair was thick and elegant from all the folic acid, and my skin was positively radiant.

One very pregnant night in June, over a candle-lit dinner at my favorite restaurant, I turned 40 in the company of 15 of my closest friends. I was high on pregnancy endorphins, and didn’t feel at all depressed.

It was probably just about as perfect as being pregnant as an older mom could have gone.

I floated along on clouds 9, 10 and 11 as my due date approached. My husband, some friends and I hiked to a secret waterfall, and I sat in the rejuvenating water on the hot day, whispering comforting sentiments to my unborn baby ― and, I suppose, to myself ― about the weeks and months that were to come.

I went to the doctor the next day, one week before my due date. The nurse grew quiet as she slid the ultrasound wand over my stomach. The exam seemed to take longer than it had before. She inhaled and exhaled audibly. I picked up on her concern.

“Is everything OK?” I asked.

“I’ll get the doctor,” she said. The doctor came in and repeated the test.

“Your amniotic fluid is low,” he said. “I suggest we induce you early.”

That was when I learned a new vocabulary word. Oligohydramnios, or low amniotic fluid, can happen for a lot of reasons. It can be due to some complication like placental insufficiency, it can happen when the mother is dehydrated, or simply because the fluid has leaked out. Because it was the dog days of August and I’d been walking, working and hiking for months, I assumed I was probably dehydrated. But doctors don’t take that stuff lightly; there too many potential lawsuits.

They gave me something called Cervidil, which was supposed to “ripen my cervix” like so many bananas before I’d hopefully go into labor. I had contractions for a full two days, but they petered out into nothing. After that, doctors gave me the dreaded Pitocin, which was supposed to kick me into labor. But that also resulted in zilch. My OB-GYN came in and suggested I have a C-section immediately.

My sweet husband was by my side the entire nerve-wracking time. The doctor suggested I’d feel some tugging. It actually felt like all of my insides were pulled out and then pushed back in place. I heard the baby scream when he was removed from his cozy bed in my womb.

He was born at 4:20 p.m. They placed the baby directly near my face; daddy, son and I all laughed and cried together while they stitched me back up. Within the hour, in my recovery bed, I breastfed my new baby for the first time. It was an absolutely incredible experience that I’m glad I decided to pursue, even though it was also the scariest thing I’ve ever been through.

I crashed very hard after the baby’s birth. I’d been so happy when I was pregnant, but as a new mother I was depressed, devastated, anxious, fearful and traumatized.

The joy and peace I’d felt on my 40th birthday packed its bags and left, hawk-diving into an avalanche of uncertainty and fear. For months, I cried onto my baby’s head and desperately tried to find a therapist who both specialized in postpartum depression and accepted my insurance.

I got stuck with an emotional coach working out of his fourth-floor walk-up apartment who asked me if I had tried Googling my symptoms. Still, slowly, the months unfolded and my anxiety mellowed out. Somehow, I made it through the first year of motherhood.

My mother, who had six daughters of her own, once told me, “You should have kids when you’re too young to know better.” I now understand what she meant.

The highs and lows of motherhood are extreme for any mom at any age, but I believe I had some additional challenges as an older mom. My mother, who had six daughters of her own, once told me, “You should have kids when you’re too young to know better.” I now understand what she meant.

To have a baby is to relinquish so much of who you are or were. In some ways, it is to die and become reborn yourself. For me, it happened on a major milestone birthday ― becoming a mom at 40 was a double doozy.

But now I know a little bit more about the world than I did in my 20s, and in many ways, I’m very glad I waited so long to have a baby.

I am more financially stable. I’m wiser and hopefully more able to answer the hard questions and deal with the challenges that are sure to come. I am less selfish. I have accomplished more and am more ready to put my career goals and dreams on temporary hiatus so I could fully dedicate myself to the growth of someone else.

Still, I wonder if it might have been better to have had children younger. I imagine I might not have been so tired all the time. Would I have had a natural childbirth? (My mom says natural birth is no picnic, either.)

My baby would have been closer to me in age, and we would have grown up together, the way my mom and I had. Maybe I could have had two or three kids instead of just one. Sure, I could possibly have another child now ― if I get to it, like, today ― but my hands and heart are currently overflowing. I can always adopt, I tell myself, if I decide I truly need to care for another person.

I had a party for my son’s first birthday. It was camp-themed. I played traditional songs on my guitar and sang with a friend. I looked out over the group of about 35 people who had gathered to celebrate. I thanked them for coming and I cried, in front of them all, like a big, happy dope.

With those tears, the childless me was set free. I was finally able to accept the me that had filled her place: a formerly childless woman who had skated in just before the gate closed and locked forever, a new mother looking out over her fourth decade of life.

I Had A Baby At 40, And It Was Awesome
'Moment Of Birth' Photos 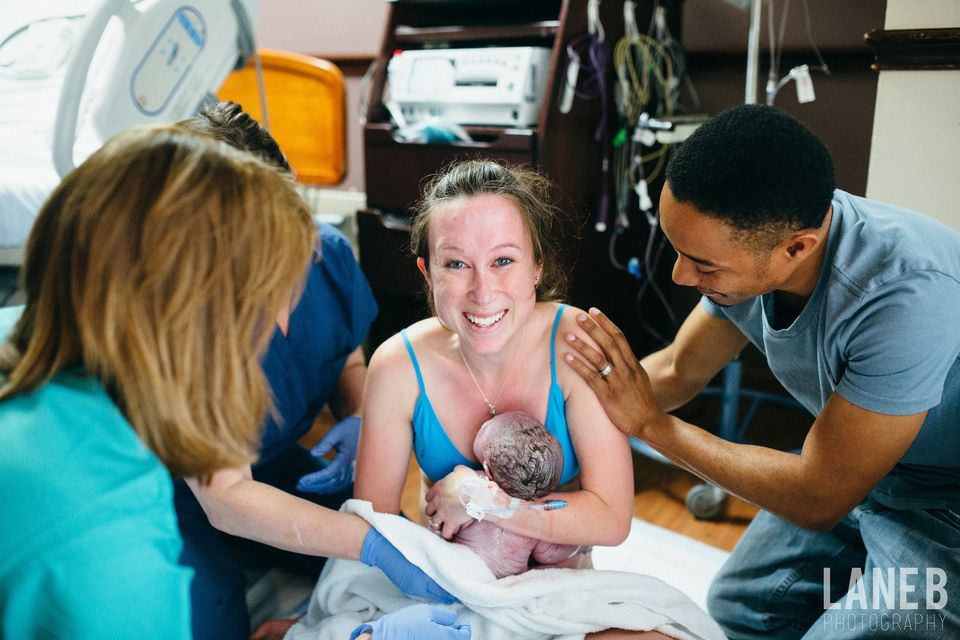