How one woman turned a life-changing event into an opportunity to thrive. As told to Kristin Canning

By Kristin Canning, SELF 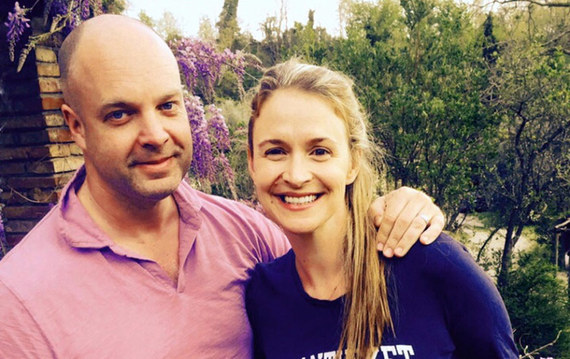 I wasn't supposed to have a stroke. I was 38 years old, a mom in "perfect" health. I run my own pro-athlete public relations firm, so I have to stay on pace with the likes of Maria Sharapova, Cam Newton and Colin Kaepernick. I was under stress, sure, but I was happy, enjoying my crazy, packed days.

It happened about a year ago. One of my best friends was getting married in the Berkshire Mountains, so I flew from Charlotte, North Carolina, where I'd been on business, to Boston and then jumped in a car and drove another two and a half hours to the venue. I was excited to celebrate with friends and also to spend some alone-time with my husband.

The morning of the wedding, before beginning my duties as maid of honor, I logged an eight-mile run -- and felt fantastic. Later, after a beautifully love-filled wedding ceremony, we celebrated well into the night; my husband had to drag me out the door around 4 a.m. On the way back to the hotel, I told my husband that I was excited to spend the next day being lazy with him. But as I crawled into bed, I felt that strange sensation you get right before a sneeze. I felt like I was sniffing a huge dandelion puff, and then like it was getting sucked up through my nose.

Then everything went black. I fell to the floor and couldn't move the left side of my body. My husband called 911, and I heard him say that he thought I'd had a stroke. He tried to get me up and dressed, and next there were EMTs taking my blood pressure and putting me into an ambulance. I heard them radio in to the hospital, heard the word stroke again. I was in disbelief.

At the hospital, I was wheeled in for a CAT scan, but I don't remember much after that. My husband later told me that I'd thrown up after they'd given me the pre-CAT-scan contrast cocktail. Then they intubated me, which woke me -- I was vomiting again and trying to pull the tube out of my throat. My doctors gave me sedating medication that relaxed me relax me throughSunday and Monday. There wasn't a neurosurgeon on staff at that small hospital in the mountains, and the doctors were concerned that they might need one to remove a piece of my skull if my brain swelled too much. To avoid this, they used a strong concentration of salts and sugars to dehydrate me and minimize swelling. I eventually woke up in a helicopter on the way to Yale-New Haven Hospital, feeling confused and insanely thirsty.

When we arrived in New Haven, Connecticut, I saw my husband and our little boy, Colin, who was nine at the time. I couldn't speak, due to the breathing tube and medications (which I was soon taken off of), but I was able to write. I still have all the notes that I exchanged with my family during that time.

We found out I'd had an ischemic stroke, meaning a clot had cut off the blood supply to a portion of my brain. We don't know exactly why it happened, but one theory is that my recent air travel or even my birth control pill had caused a clot to form in my blood. On top of that, I was born with something called patent foramen ovale (PFO). It's a tiny hole in the wall between the two top chambers of my heart -- I didn't even know about it until my stroke. About 25 percent of the general population has this condition, and mine possibly allowed a blood clot in my legs or pelvis to rocket through my heart and into my brain.

While I had been in another world at the hospital in Pittsfield in the Berkshires, my family was given the possible outcomes based on the size of my stroke: I could end up in a vegetative state, I could be left paralyzed and blind on my left side, I could retain partial use of my left side but have no concept of emotions -- or I could have a miracle.

My family and friends decided on the fourth option, and my body eventually followed suit. My close friend Capucine had decorated my hospital room with words: positivity, hope, love. My son, Colin, had brought me his favorite stuffed animal. During the week I spent at Yale, I practiced slowly walking the halls, and eventually I was even able to do ballet kicks. My left arm remained partially numb and the left side of my face still drooped, but I was so ready to go home. Since the stroke had happened in the right hemisphere of my brain, I had lost my concept of time. I sadly watched Colin's championship football game over Skype, but I was determined to get out of the hospital for his end-of-year team banquet.

Related: Tips for Reducing Your Risk of Stroke

I spent almost all of November, December and January recovering at our home in Connecticut. I was no longer jet-setting to meet clients -- I was exhausted after just picking up the mail. The left side of my tongue and mouth lagged, slowing my speech, and I'd get days mixed up. I struggled to put my hair in a ponytail, tie my shoes and even zip my jacket. For someone who'd been so fit and active, these changes were incredibly hard for me to accept.

But I was doing physical therapy and progressing faster than my therapists had anticipated. I had super-small daily goals that my husband helped me with, like completing facial exercises. I was focusing on my nutrition like never before and reading more than I ever had in my life.

By the end of January, I felt inspired to show everyone, especially Colin, that I was back as a supermom, career woman, friend -- as the high-speed Merideth everyone had known. Colin had been told that his mom might not make it. I never wanted my son to see me like that again. I know that was so difficult for him (he still worries about me, though he grew up a lot during that time and has a stronger constitution because of it). I wanted to show him that I was still his strong, resilient mom.

Colin is into rock climbing, so I started going with him and using it as therapy. It's perfect, because it forces my brain to find a way to communicate with my muscles to move my left arm. We even filmed a video of me climbing to the top of the rock wall to show my family, friends and clients that I was ready to step out as myself again. I started walking with Colin to and from school, five miles a day, and by May I had worked back up to running. I'm planning to do a marathon on November 1, the anniversary of my stroke. I hope Colin will see that if I can run 26.2 miles, then that stroke's got nothing on me.

My life is better than ever now, with family vacations and business trips. While I still have some numbness and tingling on my left side that gets in the way of things like tying my shoes, it's not as constant as it used to be. The biggest difference has to do with the way I look at things. I only let positive people into my life now, because I know the power of hope and optimism. I'm so much more present in my son's life. And I don't sweat the small stuff anymore -- at all.