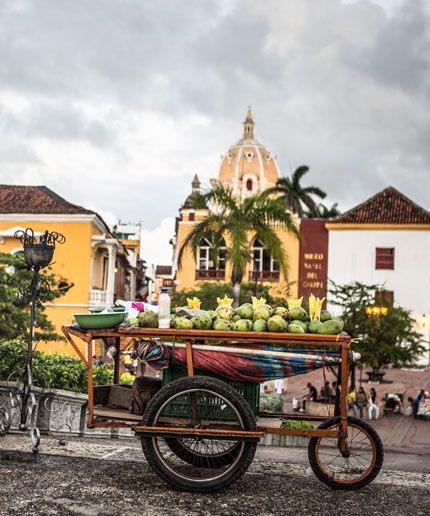 The travel bug sank its teeth into me the summer I turned 25 -- leaving me with an uncomfortable, out-of-reach itch I just couldn't scratch. I didn't grow up in an upper-middle-class family that vacationed in Europe. I'm an immigrant from Jamaica who moved to the U.S. when I was 16 and stayed put. The American dream had been my adventure. But when I got a passport after becoming a naturalized citizen, it sparked a desire in me that I never expected: I started dreaming of traveling overseas. But my life choices -- a steady office job, buying a house, getting married -- didn't seem to allow for it. For the first time, these achievements I'd celebrated and worked so hard for felt like perfectly tied laces for shoes that no longer fit.

The wanderlust was maddening. I created a Pinterest board called "Places to See," where I shamelessly pinned dream destinations the way girls pin wedding plans when they're not even in a relationship. Visions of Paris and India and Thailand taunted and thrilled me. Unfortunately, my husband didn't share my enthusiasm for traveling overseas -- or maybe he did, but just had a better grip on reality. I couldn't blame him. We had demanding jobs, limited time off, and more pressing ways to spend our money (like hardwood floors and our baby fund). Still, he tried to keep me happy with trips to U.S. cities. I scavenged through my Pinterest board for domestic destinations with round-trip tickets for under $250 -- the narrow extent of adventure our lifestyle permitted.

We ate praline bacon and beignets in colorful New Orleans, hiked picturesque state parks in Colorado, road-tripped to Savannah, went sightseeing in D.C., and strolled for hours around St. Augustine. We listened to live music and visited flea markets. We perused the local mom-and-pop scenes, but also indulged in tourist traps. We were partners. We alternated the window seat, negotiated our itinerary of must-sees, and finished each other's sentences when we told stories about our trips. At the time, it felt like the true perk of marriage was having a built-in travel buddy.

For a while, I felt content. For a while, I relished the planning and the experiences and the hotel sex. For a while, I pushed globe-trotting fantasies to the back of my head, but I couldn't forget what I really wanted. I wanted to go abroad. I wanted stamps in my passport. I hadn't taken more than three days off work in years. At the very least, I wanted to explore for more than a weekend. The Germans call it fernweh: an ache for far-away places. A desperate desire to travel the world. Far-sickness -- literally, the opposite of homesickness.

One Sunday afternoon, my fernweh reached its fever pitch.

As I watched Anthony Bourdain explore Morocco in an episode of Parts Unknown, the words were out of my mouth before I could stop them: "What are we doing with our lives?" It wasn't the first time I'd whined about this, but this time my tone was different, urgent. My husband -- the practical one who keeps my feet on the ground -- looked at me with an apology in his eyes and said, "Don't let me hold you back." It wasn't the first time he'd said this, but this time his tone was different, too -- genuine, encouraging even.

I wasn't a kite that wanted to be released. I just needed some slack to get wind under my wings. He understood. Our priorities were different, and we could sit around feeling guilty about it, or give ourselves permission for personal growth and fulfillment. If I wanted adventure abroad, I'd have to do it by myself -- but it didn't mean we loved each other any less.

I'd never considered traveling alone before. Not seriously, at least. It was illogical, like people who purged all their stuff to couch-surf around the world, but even that had started to seem less absurd lately. Yes, I wanted to travel abroad, but could I do so safely as a woman on my own? I'd always thought the answer was no. Which safety concerns were fact and which were fiction? I'm an introvert. Would I have trouble meeting people? Can you be both adventurous and awkward? I needed convincing -- lots of it -- so I went looking.

I bought a copy of Wild, which I read as reverently as if it were the Bible. I was lit up by Cheryl Strayed's topsy-turvy but ultimately triumphant journey hiking a thousand miles of the Pacific Coast Trail by herself. It's incredible how someone else's story can give you the courage to rewrite yours. I listened to podcasts, read blogs, and followed strangers on Instagram -- Amateur Travel, The Pin The Map Project, She Is Not Lost -- badass women who weren't scared to travel alone. At least, not scared enough to let it stop them. I bought The Solo Traveler's Handbook and devoured it from start to finish. It still seemed intimidating, but I started to think maybe I could do it. On a whim three months later, suffering a particularly bad case of the Mondays, I searched for flights and actually booked a ticket. I felt ready. Ready for how this trip would surely change me -- good or bad.

Not London, not Italy, not Spain. Cartagena -- the "g" is pronounced like an "h" -- a colorful, historic city on the north coast of Colombia, a city I hadn't really thought about much until it kept popping up again and again on those podcasts and blog posts and Instagrams I followed so religiously. Just that morning, my coworker had slipped it in between Nashville and the Bahamas on a list of recommendations where I should celebrate my birthday. That Monday night, seeing Cartagena on the list of flight deals was serendipitous, like when someone calls you the moment you've thought of them. Tickets were on sale for only $190. I'd just gotten an unexpected bonus at work. I had a week's worth of "use it or lose it" time off. Why not? I didn't speak much Spanish, but I'd learned the basics in school. I could book a private room at a hostel. Overall, Cartagena seemed like best case: destiny; worst case: doable. I'd figure out the logistics later, like who would watch my stuff on the beach while I swim.

I want to say this bravado never wavered. I want to say that five weeks later I marched onto flight 946 with my head held high, excited to extinguish my fernweh. But that wasn't the case. The truth is, I freaked. I woke up on the morning of my flight with ice-cold feet. The voices of all the naysayers replayed in my head. It's dangerous. You don't even speak Spanish. You'll be so lonely. These words broke loose from my subconscious and stole all the confidence I'd spent months developing. Tears flowed. Lots of them. I couldn't recall a single reason why I had thought this was a good idea. Primarily, Why the hell would I travel without my partner?

If my husband felt any satisfaction at my sudden change of heart, he didn't show it. All he said was, "Babe, get dressed."

You'd think I was heading to my own execution. I cried the whole morning. I cried the whole drive to the airport. I cried when he hugged me goodbye outside of the terminal -- an epic meltdown like a popsicle in the Florida heat. He gave me a pep talk, told me how proud he was, and it was enough to get me through the doors, on the plane, and hours later on the ground safe and sound in South America. Seeing a copy of Wild in the airport bookstore also may have had something to do with it.

After such a journey, did the destination deliver? Cartagena was better than I imagined. At first overwhelming, but we warmed up to each other quickly. Even with my terrible Spanish, challenges like taking a taxi from the airport to my hostel were anti-climactic in comparison to the anxiety leading up to the trip. Sounds of the city -- cars honking, men catcalling, vendors soliciting, birds singing, mosquitoes whirring, a mix of accents and languages -- they took some getting used to, but are now committed to memory. The sun hits you differently there. I took home a sunburn as a souvenir.

Like my U.S. dollars, a little sociability went a long way in Cartagena. I had worried about meeting people, yet made friends everywhere I went. I avoided the rowdier crowd at my hostel, but hit it off with the more subdued bunch who woke up for breakfast. I met kind women from California, Ecuador, Switzerland, Ireland, and France, who were also traveling alone. All I had to do was say yes when they asked if they could sit next to me, and the rest fell into place. When you travel, everyone seems interesting, which makes conversation easy, even for the shy. We exchanged stories and made plans. They watched my stuff at the beach while I swam at Playa Blanca. We went dancing all night on a rooftop. We drank shots of Aguardiente. We even made plans to visit Mexico together in November. I felt a lot of things, but loneliness wasn't one of them.

I also made a point of spending time alone -- reading, eating, exploring all I could. I roamed around the Old City for hours and fell in love. I watched the famous sunset at Cafe del Mar. I spent a night under a mosquito net on an island off the coast. I was the fifth wheel on a snorkeling trip with two Spanish-speaking couples. They were so kind, going so far as to buy me lunch so I wouldn't be left out. I floated inside the mud volcano called El Totumo -- a wacky tourist trap where locals give you a massage in the mud and then wash you down with buckets of (questionable) water when you climb out. I took a carriage ride by myself. I ate arepas and fried fish and coconut rice. Some days the language barrier worked against me, like when I missed my stop on a boat ride to Paraíso Secreto (which appropriately translates to Secret Paradise). I journaled every detail so that I could look back and remember that it all turned out fine.

Overall, Cartagena proved my optimistic expectations right -- the worst days were still doable, but most moments felt like destiny -- like exactly where I was supposed to be.

I encountered a lot of raised eyebrows whenever I mentioned I was married, but it stopped bothering me. I didn't feel guilty. Every day in that far-off place reassured me that I was there because of a happy relationship, not the opposite. When I returned home, we hugged and kissed and were eager to share our stories and catch up. But we didn't say, "We're never doing that again!"

It's true some experiences are better shared, but for me, travel is just as good all by myself.

8 Simple Rules For Being A Good Traveler
More:
travelColombia
Newsletter Sign Up
An essential daily guide to achieving the good life
Subscribe to our lifestyle email.
Successfully Subscribed!
Realness delivered to your inbox