"Should I stay home?" my husband asked. He was planning to go for a run at the park with our 2 1/2 year old.

I was 37 weeks pregnant with my second child, and had been having mild cramping that morning. In the week prior, I had been experiencing Braxton Hicks contractions, so I figured this was just a continuation of those.

The cramping started at around 6:00 a.m., and seemed more consistent than it was the week before. However, I still didn't know if I was, in fact, in labor. 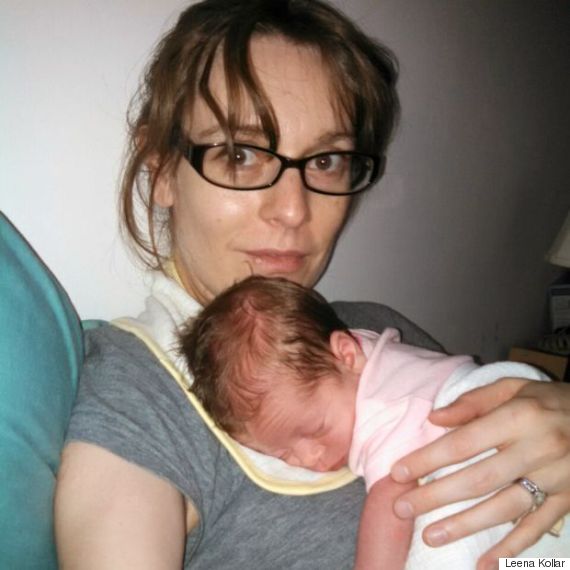 (With my first pregnancy, my water broke (I was about 36 weeks pregnant with that one). And I mean, it BROKE. The flood gates were opened. Water poured, gushed out of me like a vaginal monsoon.

By the time I arrived at the hospital, I had soaked my underwear and two layers of bath towels. I had a giant, obvious "my water just broke" stain on my rear, which was apparently quite a sight to see for the others who were waiting in the lobby.

My labor was not horrible with the first pregnancy, and by the time I started having any intolerable pain, I was given an epidural. I didn't really get to experience the "momentum of contractions," which is why I couldn't tell if I was in labor with my second pregnancy.)

I had read online that the best way to tell real contractions apart from Braxton Hicks was to get up and move, and see if the pain subsided.

So I got out of bed that morning, around 9:00, and I took a stroll around our cul-de-sac. When I returned from my walk, the pain didn't seem that bad, but it was still there. I called the on call nurse from my OB/GYN's office, and she said to go to the hospital when my contractions were:

While I was still uncomfortable, the contractions were about 10 minutes apart, but weren't getting stronger. I didn't want to go to the hospital for a false alarm, so I decided to wait a bit longer.

With my husband and toddler out running, I was left at home with my Hungarian mother-in-law, who speaks about 3 words of English. I had the Google Translate app on my phone, which is what we used to communicate while she was there.

I did my best to explain to her that I was hurting, and that I was trying to time my contractions. She seemed to understand, as she brought me a wet washcloth to put on my forehead. By now it was approximately 11:00 a.m. And then shit hit the fan.

All of a sudden, I had a really strong contraction. I was on the couch lying down, and couldn't get comfortable. I decided it was time to get dressed and get my hospital bag ready. I started to make my way down the hall to my bedroom. I pulled out my cell phone and told my mother-in-law that it was time to get ready to go.

I almost made it to my bedroom without having another strong contraction, but just outside my door, I pushed my hand and head against the wall and took a deep breath. Then I called my husband. It was 11:20 a.m.

"I think you need to come home." I said.

Without hesitation, he replied, "OK. I'm going back to the car now."

As I started to prep for the hospital, my pain began to grow. My mother-in-law suggested that I lie down on the bed, and I followed her suggestion.

Within minutes, I realized that I was in labor. Like, it's too late to go to the hospital labor. She brought me another wet washcloth, but by now the pain was becoming unbearable. I was tossing and turning in the fetal position, and managed to call my husband again.

"Should I call an ambulance?" he asked.

He was on speaker phone, so he was able to tell his mother what was going on. He called me a few seconds later to let me know that the ambulance should be there within 10 minutes. Ten minutes?? I can't wait 10 minutes!

What happened next was like a scene from a movie. I was in so much pain that I was forcefully writhing. I was grabbing the sheets with white knuckles, screaming like a crazy person.

I realized at that moment that the baby was coming. She was going to be born right then and there. I could feel her moving down and, as crazy as it sounds, I tried to suck her back in. I wasn't ready. I couldn't have her yet.

Besides the fact that there were no medical professionals around, and I had no idea what to do if she was born, I had tested positive for GBS (Group B Streptococcus), which meant I was supposed to receive antibiotics during labor, to prevent the infection from getting to the baby. This scared me more than anything.

I wouldn't be able to get antibiotics. Would my baby be OK? And how was I going to do this without any pain medication?

Then it really hit. I am not going to get any pain medication. I'm giving birth at home, in my bed. Holy. Shit.

After what seemed like an eternity, my mother-in-law went to the front door and a herd of firefighters paraded into my bedroom. There had to be at least 10 of them. I felt like Dorothy from The Wizard of Oz, when her family surrounds her bedside after her colorful dream. One of the firemen put an oxygen mask on me and started asking me questions.

"How far apart are your contractions?"

I could barely speak because I was too busy screaming. But I somehow managed to tell him that the baby was coming.

"I'm not pushing, but the baby is coming," I told him.

Just then, a few EMTs arrived at the scene. They repositioned me so that I wasn't hanging over the edge of the bed. (Which apparently I was doing, but I don't remember.)

I could feel the baby's head. It was now or never, and this baby was ready to enter the world.

"Yep, she's crowning," one of the firefighters said.

And within seconds, at 11:54 a.m., my baby literally shot out of me. Two giant thrusts from her and she was out. Moments later, my husband finally made it home and upon entering what looked like a room from a bloody horror show, was told, "It's a girl!"

This experience was so rare, and so special, that the fire department received an award for delivering my baby at home. I became somewhat of a local celebrity, hearing, "Oh, that was you?" when sharing my story with neighbors and members of the community.

While I was still concerned about the GBS being an issue with my baby, she was closely monitored by the medical staff and her pediatrician at the hospital. She came home healthy and hasn't had any health issues since.

In hindsight, I'm glad I didn't go to the hospital. I think the baby probably would have been born on the ride over. Or in the waiting room.

And honestly, giving birth at home unexpectedly made me realize my strength. Never in a million years would I have thought I could handle a medication-free home birth. I felt like Wonder Woman. I kept telling myself, "Damn woman, you did it! You're amazing!"

We (women) should never underestimate what we're capable of. We deserve so much more credit than we give ourselves. And every time I look at my sweet baby girl, I'm reminded of what I'm made of.

It Happened To Me: I Had A Smug Labor

Weirdest Places Women Have Given Birth