Two nights ago, my 10-year-old daughter, Tish, who is a younger version of me (in every wonderful, terrifying way) sat on my bed and said with a shaky voice, "Mama, the other girls are all skinny. Why am I different?"

I stared at her and silently lost my mind. Ten is when I noticed my differentness, too. Ten is when I decided there was something wrong with me and became bulimic. My life became a total shit storm for the next 20 years. And as I sat on that bed with my baby, I swear to you I became 10 again. It all rushed back and I froze. I just froze. I could not think of one helpful word to say. Even though it is my entire job to think of something helpful to say.

I kept repeating this in my head: This can't be happening. No, no, no. NO. NoNONONO.

I tried to use my secret life strategy, which is to treat every conflict like I'm at an improv. Instead of resisting other people or ideas or problems, instead of no no no no I say: YES. And..... But that didn't work. Nothing but frozen silence from me.

Craig was by the door and he said, "G, can I talk to you for a second?"

I looked at Tish and said, "Hold on, baby." Craig and I went into the bathroom.

I looked at him and said some bad words. Then I said, "I can't do this. I AM this. How do I help her from becoming this when I AM THIS?"

Craig said, "No. You can't freak out right now. I know this is intense for you -- but she needs you. You were made for this. Just tell her the truth. Can you do this?"

And I said, "Yes. Fine. Okay." So I went back out and Tish and I sat on my bed for two hours and talked about everything. We talked about all the messages girls get about staying small and quiet and competitive and how that's all horseshit meant to keep girls weak and separate from each other, so we can't join forces and lead. We talked about how hard and wonderful it is to have a body, and we talked about what, exactly, bodies are for. I did my best. The truth is -- I'm still learning what it means to be a woman and how to live comfortably inside my body. Ten to 40 has gone by pretty fast.

Then last night, Tish and I went to a bookstore. On our way out, Tish stopped in front of the magazine rack. She stood in front of a rack made up of seven covers -- covers that all displayed pictures of women, each blonder and more emaciated than the last, each angrier and more objectified than the one before. These magazine covers held up a certain type of pretend woman for all to see as the pinnacle of female achievement. Tish stared. My insides caught fire. I thought about calling her away but then decided: no. I won't leave her to figure this out alone. We'll wade into this together.

So I walked over and said, "Confusing isn't it? What do you think they're trying to tell you about what it means to be a successful woman? Do you believe them?"

We talked for a while.

Then I picked up a magazine and we looked at it together. I said, "Tish, what do you think women's bodies are for?"

And she said, "Writing, running, hugging."

And I said: "Are women's bodies for selling things?"

And when we got home Tish went to her room and the next thing I heard from her was: "MOM! HOW DO YOU SPELL PETITION?" And an hour later she brought me this. 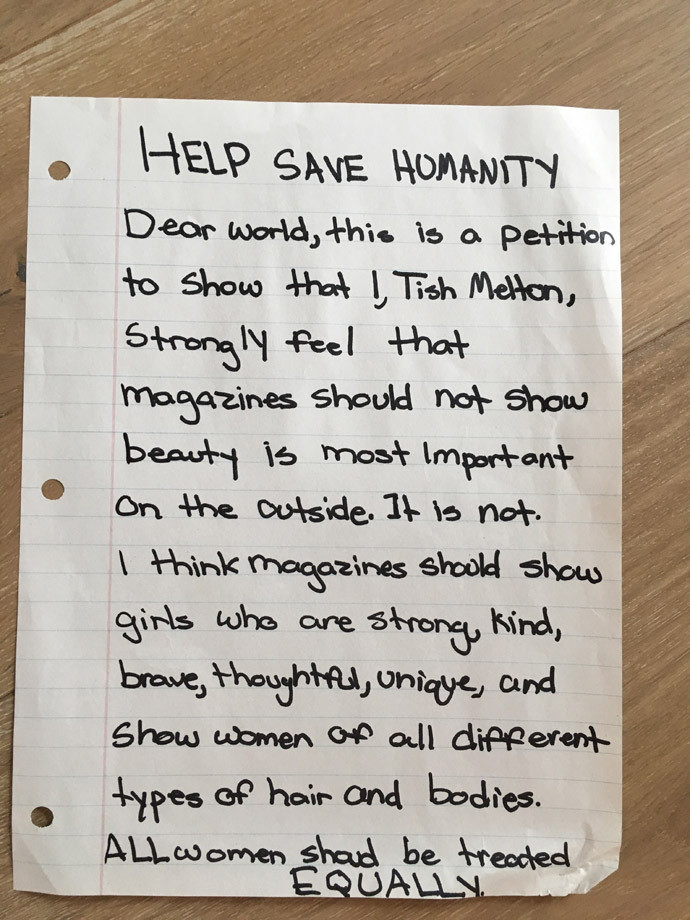 And I cried and cheered and then we all signed it and I wrote HELL YEAH but my son changed it to HECK YEAH because honestly my kids are a little judgey. 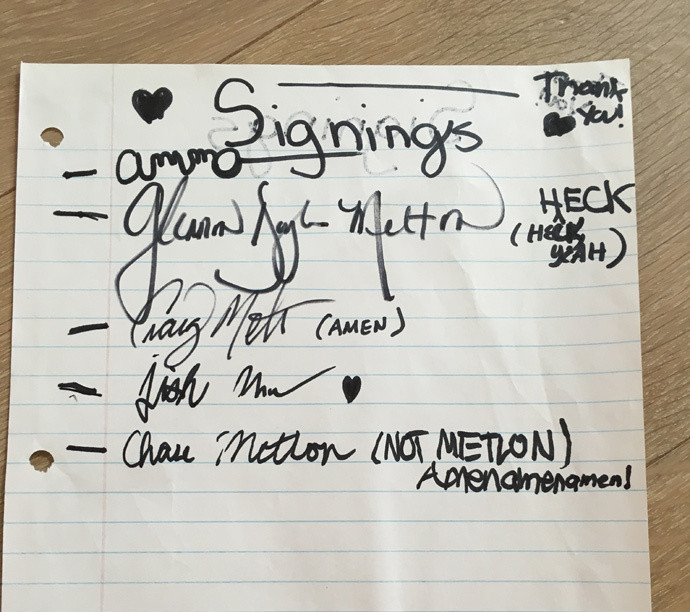 And she'll likely get a little pissed. And that's what I want. I want girls who are angry instead of sick.

Awake girls might be a little angry. But they know that the poison is outside, not inside. And they'll work to clear the air for all of us.