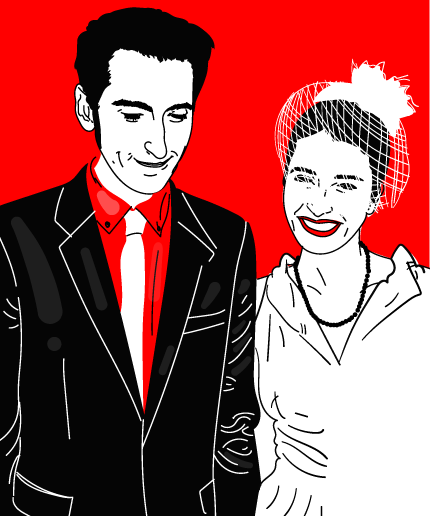 For years, I've been telling my wife that we should form a band. Never mind that I'm a hack guitarist and she claps like Hillary Clinton at the 1993 presidential inauguration. I've always equated rock 'n' roll with everything that's beautiful and good in this world, and I'd love to bash away on power chords while my missus misuses a drum kit.

In my head, we're always a duo: an off-brand White Stripes with silly songs only we understand. Now, our band would have to be a trio. In two months, my wife will give birth to our first (and sure to be only) kid. If this familial expansion were only messing with my musical fantasies, it would be one thing. But there's more at stake.

I've never liked kids or had any interest in being a dad. I feel about parenthood the way I do about blues-rock from the '60s and '70s: It's boring and borderline distasteful -- fine for other people but definitely not for me. My wife and I had always been on the same page, but about two years ago -- after we'd been married four years and together for about a decade -- she changed her mind. She never gave me a baby-or-bust ultimatum, but knowing how important this was to her, I agreed to let Mother Nature cast the deciding vote. That's the last time I trust her.

News of the pregnancy hit me like the breakup of a favorite band. It felt like the end of something -- my youth, my freedom, my ability to scoff at all of my breeder friends with BabyBjorns over their necks and bits of half-chewed banana on their shirts. Such things make me queasy. Screeching babies scramble my neurons like squirrels let loose in a roomful of dominoes. I'd rather endure 10 hours of Eric Clapton than 10 seconds of their wailing. Like I said, I really do not like kids.

This is not a popular opinion among fellow thirtysomething males. According to a couple of recent polls, more men than women in my generation want to start families. Anecdotally, I can say these numbers are very accurate. Most of my male friends from high school and college have already sired a drooler or two, and all of them are natural dads. They brag about test scores and dance recitals and clog up Facebook with posts I use to justify my avoidance of social media. It's all so showy and self-congratulatory -- like a wanking blues-rock guitar solo, only worse.

So unfathomable is my disdain for children that I've alienated more than a few friends by merely discussing it. "You'll be a great dad," they say, completely missing the point about why I'm so down on daddyhood. My standard reply: I'd probably be great at one-armed hang gliding if I suddenly found myself on top of a mountain with only a hang glider to escape from the grizzly bear that had just broken my arm. Certain situations can be avoided, you know? I want to respond by asking them why they'd willingly make their lives so much more difficult. Now that you've found the love of your life -- someone you know is always going to be there for you -- do you honestly feel there's something missing? Why is your band still seeking members?

These Kids' Drawings Of Covid Are Genuinely Hilarious